'I am an elected CM, not a terrorist," says Arvind Kejriwal in Delhi assembly 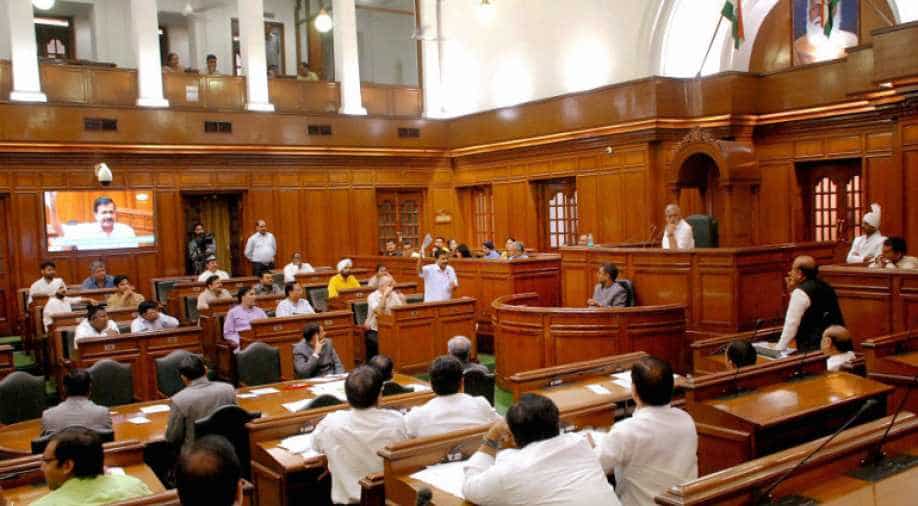 "I am an elected chief minister, not a terrorist," Arvind Kejriwal said today while dramatically hitting out at Lt Governor Anil Baijal for "opposing" a Bill to regularise guest teachers in Delhi.

At a day-long session of the Delhi Assembly, Kejriwal launched a broadside against the LG, BJP and the bureaucracy, alleging a nexus between them, which prompted a walk-out by the opposition.

"Hum Delhi ke maalik hai (we are Delhi's masters), not the bureaucracy" he asserted at one point, which was greeted with loud cheers and table thumping by the Aam Aadmi Party MLAs.

He was taking part in a discussion on a Bill introduced in the Assembly to regularise the employment of around 15,000 guest teachers (working on contractual basis) in Delhi government-run schools. The Bill was later passed by the House through a voice vote.

Registering his objection, Baijal had said that matters relating to 'services' fall beyond the legislative competence of the Legislative Assembly of the National Capital Territory of Delhi and that the proposed legislation was not in accordance with the Constitutional scheme.

Kejriwal alleged that the files relating to the regularisation of the teachers were never shown to Deputy Chief Minister Manish Sisodia, who also holds the education portfolio, by the officials in the direction of the LG.

"What state secrets do these files contain that they cannot be shown to us? I want to tell the LG that I am an elected CM of Delhi and not a terrorist. He (Sisodia) is an elected education minister, not a terrorist," Kejriwal said, drawing references from a dialogue of the 2010 Shah Rukh Khan starrer 'My Name is Khan'.

The AAP chief's combative speech, something he is known for, comes after a long gap when he remained unusually quiet, even on social media, refraining from attacking the opposition or Prime Minister Narendra Modi.

Kejriwal also took exception to Baijal's objection that the government did not consult the Law Department before introducing the Bill.

"People did not elect the law secretary, they elected us. The country is run on democracy, not bureaucracy. We are Delhi's masters. They (bureaucrats) will follow our orders," he said.

Since storming to power in 2015, the AAP and the bureaucracy have shared an uneasy relationship with frequent run-ins over matters of jurisdiction, mainly due to the capital's administrative structure where the LG enjoys primacy over the elected CM.

Sisodia affirmed that the Bill was introduced after due legal consultations and wondered why the LG was objecting to it when he had cleared the government's proposal to regularise the services of around 150 Kashmiri migrant teachers employed in the city's schools on a contractual basis since 1994.

"We do not agree with the LG's assertion that the matter comes under services. It is a matter of education and his stand amounts to insulting the Constitution, the teachers and the entire education system. Education does not just mean constructing schools. Recruitments and appointments of teachers cannot be treated separately," he said.

During the debate, Leader of Opposition Vijender Gupta said the AAP government's real intention was not regularisation, but politicisation of the issue, for which it "has not actually followed the laid down procedures governing a Bill."

"The foundation of the Bill is flawed. One has to go by the rule of law, not rhetoric," Gupta said, when "invited" by Kejriwal to sort out the issues and bring amendments by sitting across the table "in my chamber".
Reacting to Gupta's objection, Kejriwal said that through his offer of an instant dialogue, he wanted to expose the "hollowness" of the opposition."If you have the guts, then confront us openly. Do not take cover behind officials and fire at us," Kejriwal said.

Gupta hit back saying Kejriwal may be a good politician, but not a "capable administrator". A few guest teachers were present at the visitors' gallery of the House during the debate.