Helipads being built ahead of Modi, Netanyahu roadshow in Gujarat 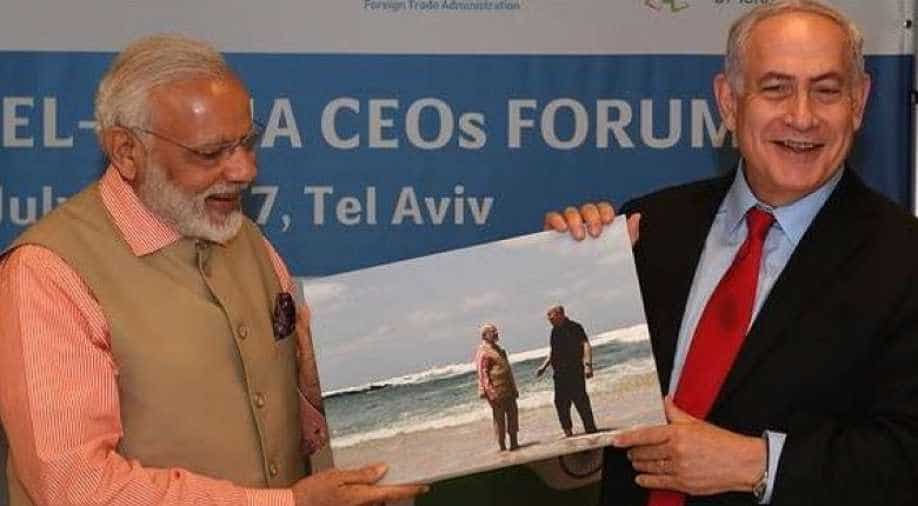 PM Modi with Netanyahu during his visit to Israel in July. Photograph:( DNA )

Israeli Prime Minister Benjamin Netanyahu's four-day visit to India next week will to start from from Delhi with visits to Gujarat and Mumbai.

According to highly placed sources, Netanyahu will be reaching Delhi on January 14th, next day the Israeli PM will be attending a bilateral dialogue between India and Israel in Hyderabad House.

On January 16th, Netanyahu will visit the Taj Mahal at Agra, while Modi will be at Barmer in Rajasthan at the time to participate in a program related to a petrochemical project. The two leaders will be together once again on January 16th.

Netanyahu will participate in the Raisina Dialogues in a joint program of the foreign ministry and Observer Research Foundation(ORF) with Prime Minister Modi.

On January 17th, Prime Minister Modi will welcome the Israeli prime minister in his home state of Gujarat.

In the role of host, Modi will greet Netanyahu at Ahmedabad airport at 9:30am and will take him to Mahatma Gandhi's famous Sabarmati ashram in a roadshow despite security challenges.

Modi will also take PM Netanyahu to Ahmedabad, where he will address a startup summit at the ICT campus, which is about 50kms away from Ahmedabad.

For this, five helipads have been built in the nearby Kensville Golf Course campus.

Then if time allows, both leaders will be seen walking on the green grass of the golf course, just as Modi had a glimpse of the coast during the Israeli tour in July last year.

Modi will be taking Netanyahu to Vadarad village of Sabarkantha district of Gujarat, where both leaders will witness the state-of-the-art horticulture centre built with the help of Israelis.

After attending these three programs in Gujarat, PM Netanyahu will leave for Mumbai in the evening and Modi will return to Delhi.

Netanyahu will visit Chabar House during his stay in Mumbai which was the target during the 2008 Mumbai attacks. During the attack 10-year-old, Moshe Holtzberg had survived after an Indian maid had hidden him in one of the rooms as the terrorist struck.

Modi had met Holtzberg during his visit to Israel in July last year.

After completing his four-day tour on January 18, Netanyahu will leave home from Mumbai.

This is the second visit of any Israeli Prime Minister to India. Prior to this, Ariel Sharon came to India in 2003 during PM Atal Bihari Vajpayee tenure.