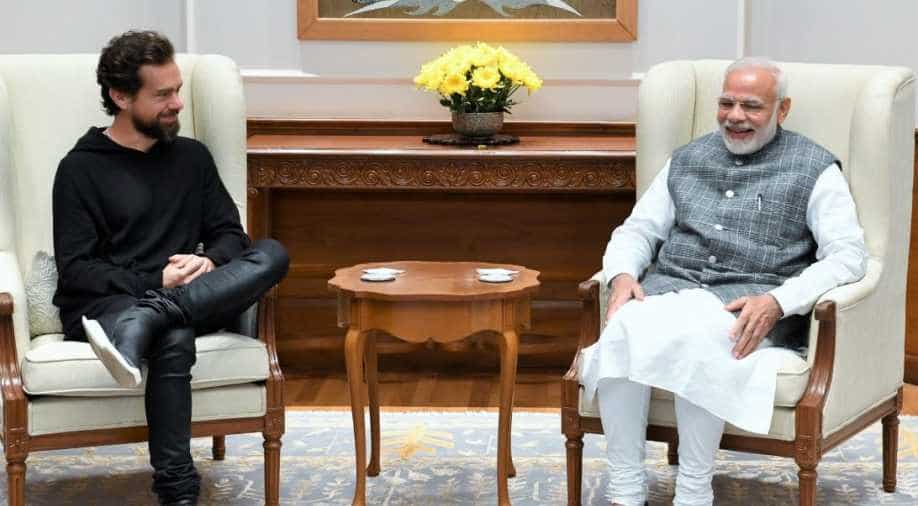 Dorsey, who is on his maiden trip to India, has already met Tibetan spiritual leader Dalai Lama and Congress President Rahul Gandhi.

After his meeting, Dorsey tweeted pictures from his meeting and said: "Thank you Prime Minister @narendramodi for having us today. I enjoyed our conversation about the importance of global conversation. Also: thanks for the ideas for Twitter!"

In response, Modi said: "Delighted to meet you @jack! Happy to see the passion with which you're leading @Twitter. I enjoy being on this medium, where I've made great friends and see every day the creativity of people."

Delighted to meet you @jack! Happy to see the passion with which you’re leading @Twitter.

I enjoy being on this medium, where I’ve made great friends and see everyday the creativity of people. https://t.co/aUElNJyahk

Dorsey, who is on his maiden trip to India, has already met Tibetan spiritual leader Dalai Lama and Congress President Rahul Gandhi.

Twitter, which counts India among its priority markets, has a large number of politicians in the country on its platform who engage with residents and extensively use it around elections.

The company has also launched its '#PowerOf18' initiative aimed at encouraging Indian youth to contribute to public debate and participate in civic engagement in the upcoming election season.

Addressing a townhall at IIT-Delhi Monday, Dorsey vowed to check the spread of fake news but said there is no "one fix" solution for the "multi-variable" problem. Social media firms have been facing the menace of rumours and fake news floating on their platforms. Organisations like Facebook and WhatsApp have taken a number of steps, including sensitisation programmes among users across the country.

"In a number of conversations, it's become more important that we scope the problem as tightly as possible because fake news or misinformation as a category is way too big," Dorsey had said Monday.

He had added that if certain content is found to be misleading, it is the company's job to ensure that such information is picked out and prevented from spreading.