Foreign ministers of 6 countries in Delhi this week 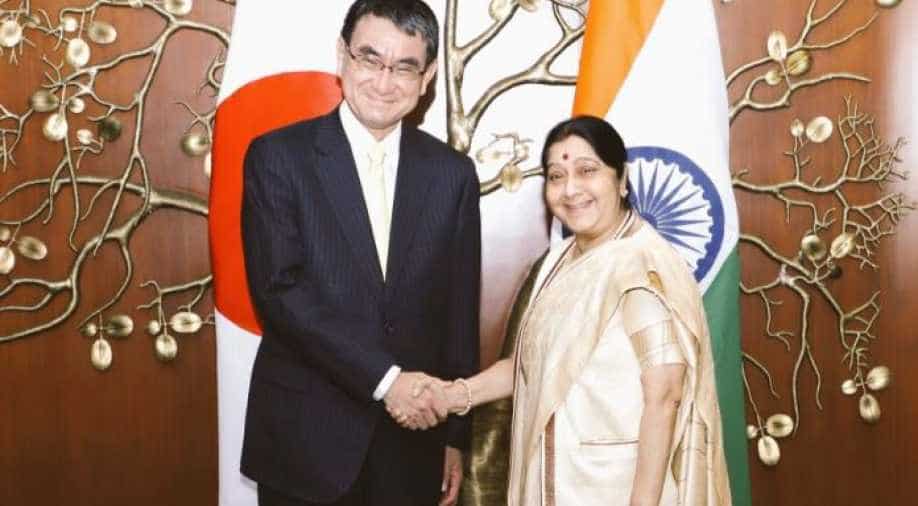 Australian, Japanese, Nepalese, Mongolian, Spanish and Iranian foreign ministers will be in the national capital this week on the sidelines of the Raisina Dialogue.

Japanese foreign minister Taro Kono was the first one to arrive in Delhi on Monday. Kono took part in the 10th round of Strategic Dialogue and called on Prime Minister Narendra Modi. The focus during the Strategic Dialogue was on Indo Pacific. The Ministry of External Affairs, in its release, said "India-Japan Special Strategic and Global Partnership has acquired a broader significance in the current global context" and "has become a factor of prosperity and stability in the Indo-Pacific region."

Australian foreign minister Marise Payne also arrived on Monday. Payne will address the Raisina Dialogue on how Australia and India can work together along with regional partners to deliver a stable and prosperous Indo-Pacific. This will be Payne’s first visit to India as country's foreign minister and follows President Ram Nath Kovind's visit to the country in November 2018.

Japanese Foreign Minister @konotaromp is warmly welcomed by EAM @SushmaSwaraj ahead of the 10th #IndiaJapan Strategic Dialogue. EAM had visited Japan in March 2018 for the last edition. pic.twitter.com/tIJ30uWDEA

Australia’s High Commissioner to India Harinder Sidhu said, "Minister Payne is visiting at a time when our relationship has grown to become a significant partnership. Our shared interests range widely across political, security, cultural and economic fields."

Iran's foreign minister Javad Zarif is also in the city and held talks with Union Transport Minister Nitin Gadkari. This comes in the background of India taking over the operations of part of Shahid Beheshti Port, Chabahar in Iran during the Chabahar Trilateral Agreement meeting held on December 24, 2018. The Iranian foreign minister will hold talks with External Affairs Minister Sushma Swaraj on Wednesday.

Giving details of the visit, Iran’s foreign ministry spokesman Bahram Qassemi said, "He will meet with Indian officials and participate in a joint trade conference of the two countries. Among other programs of the Iranian foreign minister during this important visit is to attend the annual international conference of the Raisina Dialogue."

Mongolian foreign minister Damdin Tsogtbaatar and Nepalese counterpart Pradeep Kumar Gyawali will also be in Delhi. India has been increasing its engagement with land-lock Mongolia in recent years. India has had close ties with Nepal with PM Modi visiting the country twice last year.

Foreign affairs ministers from as many as 10 countries visited India between November 24 to December 24, 2018.