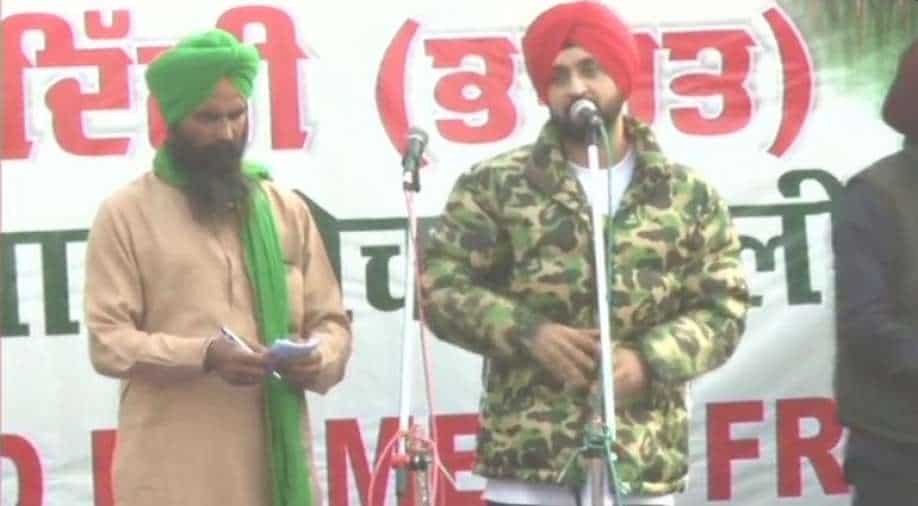 Dosanjh purposely addressed public in Hindi to make sure no one has to Google the translations of his words, and he can efficiently send across his message

The singer-actor Diljit Dosanjh, who was recently in news for a verbal Twitter spat with Bollywood actress Kangana Ranaut, made a surprise guest appearance at the Haryana-Delhi border — Singhu border — to support the protesting farmers in India.

He addressed the gathering of hundreds of farmers at the border. He took to the stage and urged the government to listen and fulfil the farmer's requests. "We have only one request to Centre..please fulfil the demands of our farmers. Everyone is sitting here peacefully and entire country is with farmers," he said.

"Hats off to all of you, farmers have created a new history. This history would be narrated to future generations. Farmers' issues shouldn't be diverted by anyone," he added.

Diljit recently had a verbal spat with the Bollywood actress Kangana Ranaut on Twitter. The two had a long exchange of comments, which started with Diljit lending his support to the farmers and Ranaut name-calling an old lady who was involved in the protests.

"We have only one request to Centre..please fulfil the demands of our farmers. Everyone is sitting here peacefully & entire country is with farmers," he says pic.twitter.com/H5ax67QsBX

The Twitter spat was also highlighted for Diljit sticking to his native language, Punjabi, while drafting replies for the Hindi-speaking actress. Many people took to Twitter to later translate Dosanjh's tweets for the non-Punjabi speaking audience. This time, while addressing the farmers at the border, Dosanjh said he is purposely talking in Hindi to make sure no one has to Google the translations of his words, and he can efficiently send across his message.

Meanwhile, Union Agriculture Minister Narendra Singh Tomar, Railways, Commerce and Food Minister Piyush Goyal and Minister of State for Commerce Som Parkash are engaging in talks with the representatives of 40 farmers' unions at the Vigyan Bhawan in Delhi.

"Our demand is the same that the government should withdraw all three farm laws. We want MSP should be guaranteed through the law," said Bharatiya Kisan Union (BKU) Rajewal state general secretary Onkar Singh Agaul.

The farmers have also announced a 'Bharat Bandh' on December 08, and have threatened to block further in-ways to the national capital city, New Delhi, if the Government of India does not fulfil their demands. The farmers have warned the government that they will be willing to increase the intensity of the protests if their demand are not met.