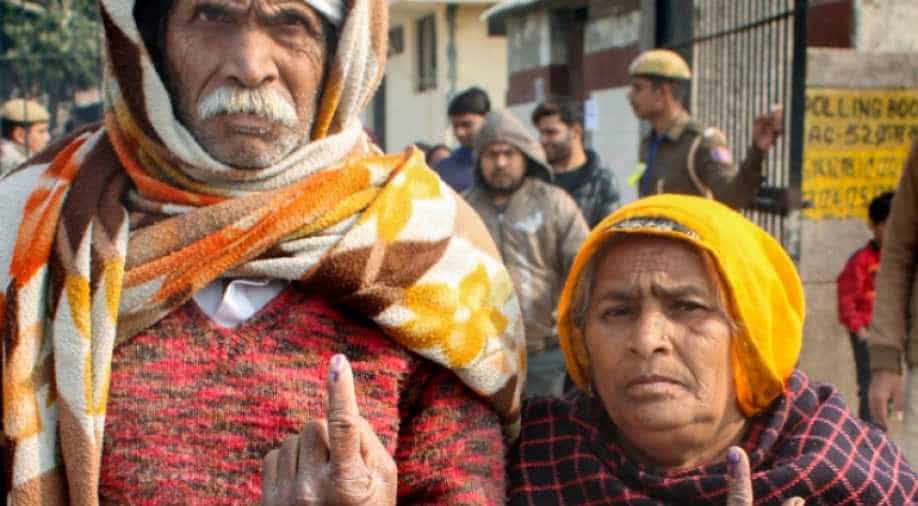 Delhi recorded a voter turnout of over 61 per cent in the hard-fought Assembly election with the polling having picked up pace in the evening on Saturday.

According to the Election Commission's Voter Turnout app, the voting percentage was 61.67 per cent at 10.26 pm.

The poll percentage was less than 67.12 per cent in the 2015 election when the ruling Aam Aadmi Party had secured a landslide victory getting 67 of 70 assembly seats.

Delhi's Chief Election Officer Ranbir Singh had said in the evening that the poll percentage was expected to go up as there were queues at several polling stations at the end of polling at 6 pm.

The officials said that elections took place peacefully and smoothly. BJP and AAP held review meetings after the polling ended and expressed confidence about their victory.

The Delhi Police said that a 60-year-old man fell unconscious outside polling booth no. 127 in Hari Nagar constituency at 10 am. He was taken to the Deen Dayal Upadhyay Hospital, but was declared brought dead.

"Probably, he died of cardiac arrest," a police official said. After the polling concluded, the Electronic Voting Machines (EVMs) were taken to strong rooms.

The counting of votes will take place on February 11. Most exit polls have predicted AAP winning over two-third majority but Delhi BJP chief Manoj Tiwari said the exit polls will fail and the party will win 48 seats.

"All these exit polls will fail. Keep this tweet of mine. BJP will form the government in Delhi with over 48 seats in Delhi. Now please do not find an excuse to blame Electronic Voting Machines (EVMs)," Tiwari said in a tweet.

"Certain exit polls are showing that BJP will win 26 seats, but let me tell you that all these exit polls will fail on February 11," he told ANI.

Delhi Congress president Subhash Chopra also said that exit polls will fail and expressed confidence that the party will do much better.

"BJP will not get even 20 seats and Kejriwal is not going to form the government in Delhi. I am hoping the Congress is going to do much better than what exit polls are showing. Let us wait till results are out," Chopra told ANI.

AAP leader Sanjay Singh exuded confidence about the party repeating its 2015 performance. There were 672 candidates in the fray and more than 98,000 officials had been deployed smooth conduct of elections.

Ballimaran is the smallest constituency in the national capital with an area of 2.50 square kilometre.