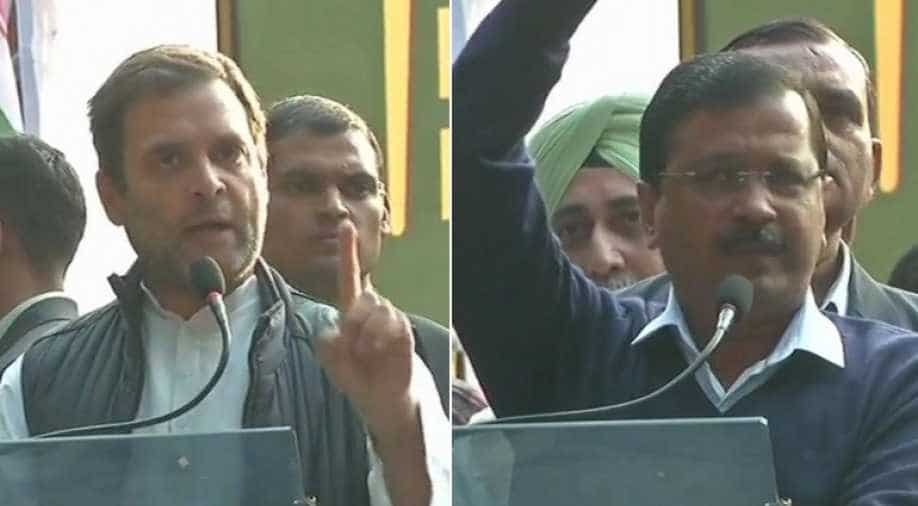 Around 35,000 farmers from across the country converged in the national capital Friday to press for their demands, including debt relief and remunerative prices for their produce.

Addressing the gathering of protesting farmers at Jantar Mantar, Rahul Gandhi called for a farm loan waiver as he assured support of all opposition leaders.

Rahul Gandhi said that the farmers were not seeking a "free gift" from the government by asking for a farm loan waiver. They were only asking for what's due to them.

"If this government can waive Rs 3.5 lakh crore loans of 15 big industrialists, why can't the loans of crores of farmers in the country be waived?" he asked.

He also said that no one will be able to silence the voice of farmers and youth.

"If the Indian government insults them, then they will ensure its removal, " Gandhi added.

Kejriwal further tageted Modi saying that prime minister has "stabbed" farmers in the back by not keeping promises made to them.

Around 35,000 farmers from across the country converged in the national capital Friday to press for their demands, including debt relief and remunerative prices for their produce.

Farmers have come to the capital from different parts of the country, including Andhra Pradesh, Gujarat, Madhya Pradesh, Maharashtra, Tamil Nadu, West Bengal and Uttar Pradesh.

The protest is called by  All India Kisan Sangharsh Coordination Committee, which claims to be an umbrella body of 207 organisations of farmers and agricultural workers, many farmers arrived in the city on trains, buses and other modes of transport.

The Friday's rally is the fourth major farmers' rally being held by the AIKSCC.

The AIKSCC has claimed that the two-day rally will be one of the largest congregations of farmers in Delhi.