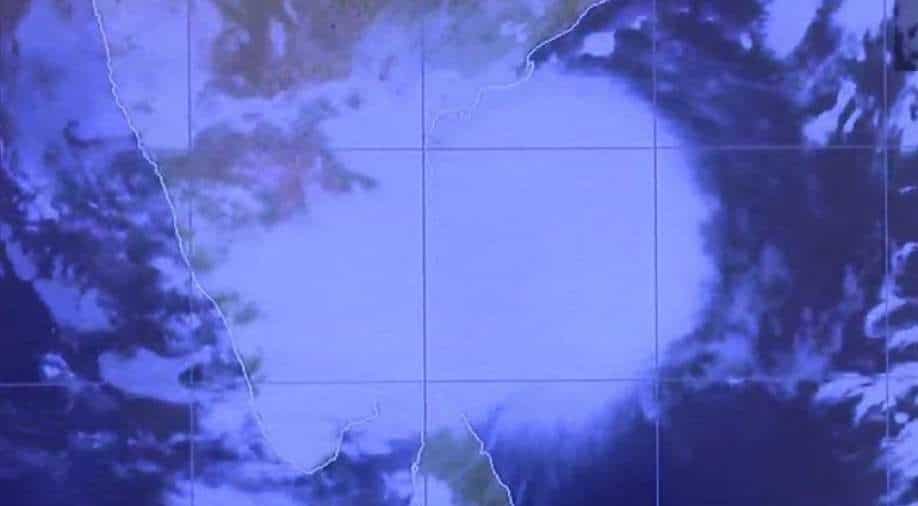 'Asani' likely to weaken into a cyclonic storm during next 24 hours. Photograph:( ANI )

The weather office today warned of "heavy to very heavy rainfall" in north coastal Andhra Pradesh and Odisha from tonight, as a result the severe cyclonic storm Asani.

The Indian Metrological Department (IMD) said on Tuesday that severe cyclonic storm Asani is expected to travel northwestwards until the night of May 10 and approach the west central Bay of Bengal off the coast of North Andhra Pradesh.

Cyclone Asani is expected to recurve north-northeastwards and move into the Northwest Bay of Bengal off the shores of North Andhra Pradesh and Odisha, according to the weather service. During the next 24 hours, it is expected to progressively weaken into a cyclonic storm.

In Srikakulam, Vizianagaram, Visakhapatnam, East Godavari, Krishna, Guntur, and West Godavari districts, squally winds with speeds of 40-50 kmph gusting to 60 kmph are expected to continue until 8.30 a.m. on May 11th, according to the IMD.

"Under its influence, heavy to very heavy rainfall warning for next 24 hrs for Malkangiri, Gajapati, Ganjam, Puri dists. Fishermen advised not to venture into the sea along & off Odisha coast till 13 May", IMD Bhubaneswar.

#WATCH Heavy rain in Visakhapatnam under the influence of cyclone 'Asani' over the Bay of Bengal pic.twitter.com/hmeLvElT1B

IMD has issued the following warnings in connection with Severe Cyclonic Storm Asani:

12 May: Over coastal portions of Odisha and West Bengal, light to moderate rainfall is expected in a few places, with severe rainfall in isolated spots.

#WATCH | Odisha: A group of fishermen had a narrow escape, as their boat capsized in the turbulent sea at Aryapalli near Chatrapur in Ganjam district. All the fishermen managed to swim to the shore, and no loss of lives reported. #CycloneAsani pic.twitter.com/ZH3ryOlHvR