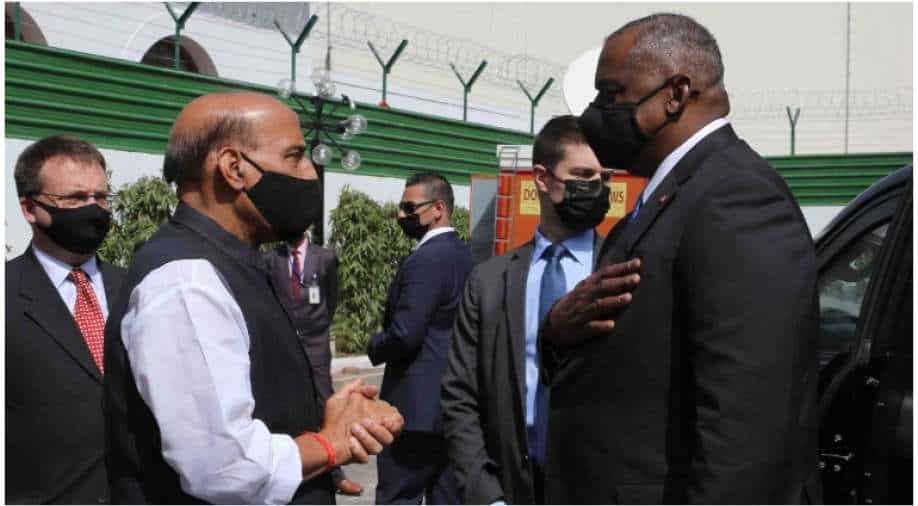 During the press statements after the over one-hour-long meeting both sides spoke on "free and open Indo Pacific", a term increasingly in usage amid the Chinese aggressive actions in the region

The line of actual control standoff involving Chinese aggressive actions in Eastern Ladakh was discussed during the meeting of India's defense minister Rajnath Singh and visiting US Defense secretary Lloyd Austin in Delhi on Saturday. During the press statements after the over one-hour-long meeting both sides spoke on "free and open Indo Pacific", a term increasingly in usage amid the Chinese aggressive actions in the region.

US Defence Secretary General Lloyd Austin pointed out, "As the world faces a global pandemic and growing challenges to an open and stable international system, the US-India relationship is a stronghold of a free and open Indo-Pacific region."

India's defence minister Rajnath Singh highlighted that both sides "discussed steps to be taken to realise full potential" of foundational agreements--LEMOA, COMCASA and BECA for mutual benefit and agreed to pursue "enhanced cooperation with the US Indo-Pacific Command, Central Command and Africa Command."

LEMOA or Logistics Exchange Memorandum of Agreement and COMCASA or the Communications Compatibility and Security Agreement are foundational agreements which Washington has signed with its close allies with an aim to increase military interoperability and transfer of equipment. Basic Exchange and Cooperation Agreement (BECA) provides for sharing unclassified geospatial information.

The many month-long China-India standoff involved the Galwan incident in which India lost 20 of its soldiers. Disengagement at Pangong Tso took place in February. But there has been little clarity over complete disengagement at Gogra, Depsang, and hot spring has been achieved.

During the meeting, cross border terror from Pakistan and the recent joint statement of Indian and Pakistani militaries on observance of Ceasefire pact of 2003 was mentioned by the Indian side during the discussion with the Americans. Last month saw India and Pakistan issue a rare joint statement after DGMO talks to cease hostilities at the Line of Control (LOC) in Jammu and Kashmir. Last year was the worst year in terms of ceasefire violation at LOC.

The ongoing situation in Afghanistan also came up during talks, with India reiterating that the peace and reconciliation efforts in the country should be Afghan-led, Afghan-owned and Afghan-controlled.

Other areas which were mentioned and discussed during the talks include, information-sharing, logistics cooperation, artificial intelligence, and cooperation in new domains such as space and cyber, military to military cooperation.

US Defense secretary Lloyd Austin is the first high profile official of Biden administration to visit India since the change of guard in Washington two months ago. India was the last leg of his visit to the Indo-Pacific region during which he visited Japan and South Korea as well.