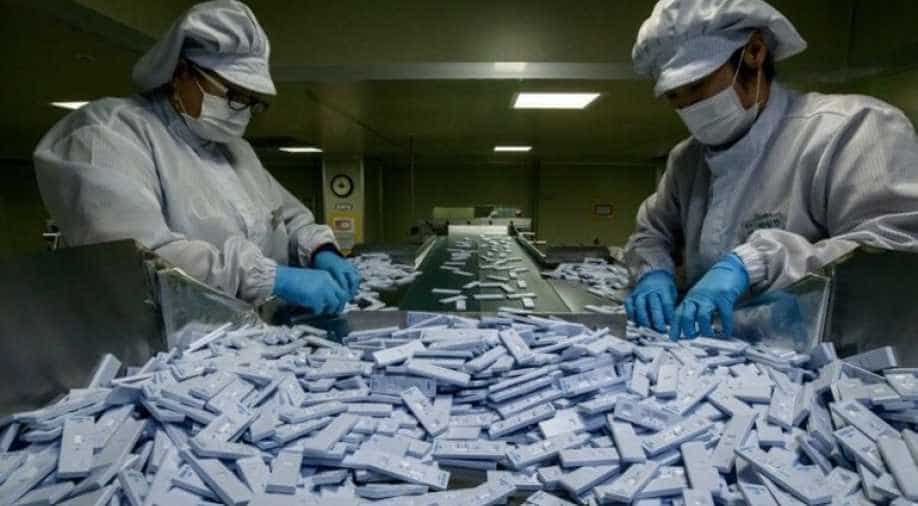 Wondfo biotech has singled out WION with our name and pictures

A journalist should never become the story. One of the first rules you're taught in journalism but times have changed and sometimes, rules must too.

In today's times shooting the messenger is fashionable. So, invariably, journalists end up becoming part of the story that they document.

It has been happening to WION since we started exposing China's lies. It happened again on Wednesday night. It is about Wondfo Biotech which is a Chinese company.

A company that supplied rapid antibody test kits to India. India found that the testing kits were faulty. So orders were cancelled and licenses were revoked. Wondfo Biotech also lost its import license for India. The story should have ended there.

But the Chinese didn't let it end. Wondfo biotech and the government of China are in no mood to put the matter to rest. So Wondfo biotech issued a statement. The company has singled out WION with our name and pictures and the press release was emailed by the Chinese embassy which is peculiar. Why should the embassy be sending press releases of a company?

The press release is four pages long. It bears the stamp of the company. It begins with denial, followed by a long list of articles and links. These are international media reports about Wondfo Biotech. Almost all reports say that Wondfo's testing kits work but, the last page is different.

It features a clip from Gravitas. A story from our broadcast on April 21 which was the day when the Indian Council of Medical Research(ICMR) had asked Indian states to stop using the Chinese test kit.

WION had reported the story in detail with facts. Now Wondfo says we got it wrong. We welcome the feedback but they say nothing about our reportage.

They mention one particular video clip. A file shot of coronavirus testing in India. Wondfo says the right procedure of blood collection wasn't followed by the medical worker. At least that is what we understood from their statement.

It says: "Users are supposed to collect specific blood samples with Wondfo made capillary straws". The fact is that our report in April had nothing to do with that!

Our story was how Chinese testing kits turned out to be faulty and we stand by it. On Gravitas, we have reported extensively on how different countries have complained about Chinese coronavirus supplies.

ICMR, the agency leading India's coronavirus response wanted to use these kits to check the trend but, they found that the kits are not working. In the state of Rajasthan, only 5.4 per cent of the results were accurate. In other words, more than 94 per cent were inaccurate.

Wondfo biotech says their kits worked in the United States and the United Kingdom. It didn't work in India, so, India stopped using Chinese testing kits.

The import license issued to Wondfo was revoked. India had not paid for the kits, the government just cancelled the entire order.

Neither the Chinese companies nor the Chinese government has accepted India's assessment. The Chinese embassy in New Delhi issued a statement.

It said labeling Chinese products "faulty" is unfair and irresponsible. China says this is preemptive prejudice. Now, here's something interesting to note. As far as we know, Wondfo Biotech is a private company.

The Chinese embassy has been emailing and tweeting Wondfo's press releases which is strange. Most governments, most embassies, anywhere in the world, do not push the agenda of private companies.

But Chinese embassies have been at the forefront of fighting PR battles for private Chinese firms. What does this tell you? the line between private and government is blurred.

As for their defence and complaints, China has mastered how to play the victim card, while being the perpetrator. Question them, and they call you racist. Cancel orders, and they cry pre-emptive prejudice.

The fact is, it's not just India, which has complained, Spain, the Czech Republic, Slovakia, Turkey, Finland and the United Kingdom also got faulty Chinese test kits.

The Netherlands recalled 600 thousand face masks purchased from China. They were N95 masks that did not fit properly and their filters didn't work.

Faulty kits are worse than no testing kits. Why should India use something that does not work? and also pay for it?

As for the Chinese companies best case scenario - this is a textbook case of a PR disaster  - supplying a faulty product and then blaming the costumer.

The worst-case scenario backed by their government, and they targeting the media in a foreign land for exposing them. Their tactics, like their kits are sub-standard.