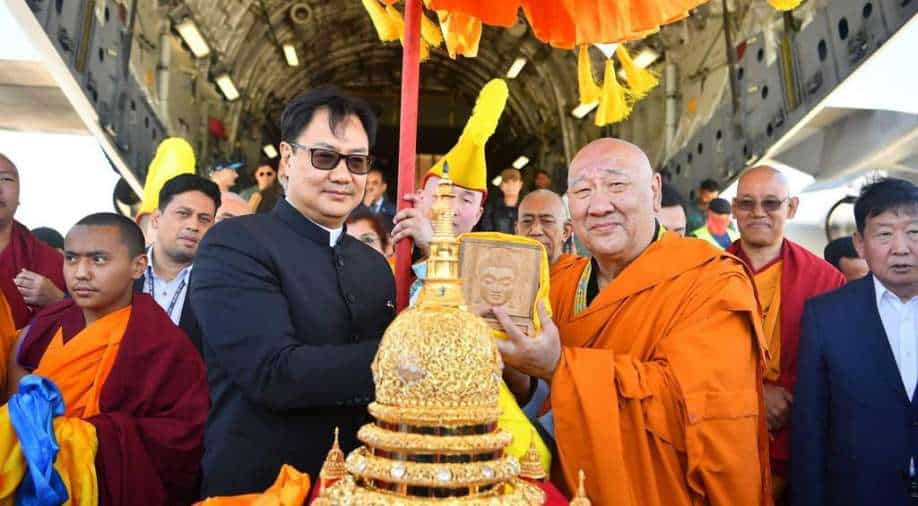 The Buddha relics also known as the ‘Kapilvastu Relics’ since they are from a site in Bihar first discovered in 1898 which is believed to be the ancient city of Kapilvastu.

In what is seen as strong Buddha link between India and Mongolia, four Holy Kapilvastu relics of Lord Buddha reached Mongolian capital Ulaanbaatar on Monday for an 11-day exposition. The relics are being kept at the famous Gandan Monastery where they were taken from with much fanfare. The Buddha relics also known as the ‘Kapilvastu Relics’ since they are from a site in Bihar first discovered in 1898 which is believed to be the ancient city of Kapilvastu. Kapilavastu was the childhood home of Gautam Buddha.

Speaking on arrival, the minister said, "I'm carrying Buddha's message of love and compassion. India is proud of its rich civilization heritage and spiritual wisdom for the world peace.". The relics arrived in the country on a special Indian air force plane with a 25-member strong delegation led by Indian Law minister Kiren Rijiju. Indian minister Rijiju, an MP from eastern state of Arunachal Pradesh has visited Mongolia in the past.  The relics were received at the Ulaanbaatar International Airport by Mongolia's culture minister Ch Nomin, Chairperson of India Mongolia Friendship Group, Mongolian MP Saranchimeg, Advisor to the President of Mongolia, Khamba Nomun Khan and Indian envoy MP Singh. Two Bullet Proof casings as well as two ceremonial caskets are being carried by the Indian Delegation for the Relics.

The last time these relics were taken out of the country was in 2012 when their exposition was held in Sri Lanka. The Relics are placed under the ‘AA’ category of Antiquities and Art Treasures and are rarely taken out of the country. These relics were taken out after a request from Mongolian govt which New Delhi agreed to. An advance team led by Joint secretary in Culture ministry Lily Pandeya comprising officials from the ministry, curators of National Museum travelled to Mongolia on 8th June for overseeing preparatory arrangements for receiving of the relics.

India, Mongolia ties have seen increased engagement. Both have been bound by the three D's- Democracy, Dharma and Development partnership. Landlocked Mongolia, sandwiched between Russia and China, sees India as its 3rd neighbor with which it has spiritual connect. Buddhism has emerged as important pillar of connect. India has printed 75 copies of 108 volumes of Mongolian Kanjur and handed over to Mongolian Government and various Buddhist Institutions there. Around 500 Mongolian monks are studying in different monasteries and institutions in India for which India has facilitated their travel and visas.  Indian PM Modi had travelled to the country in 2015 and had even visited Gandan Monastery and presented a Bodhi Tree Sapling to Hamba Lama.