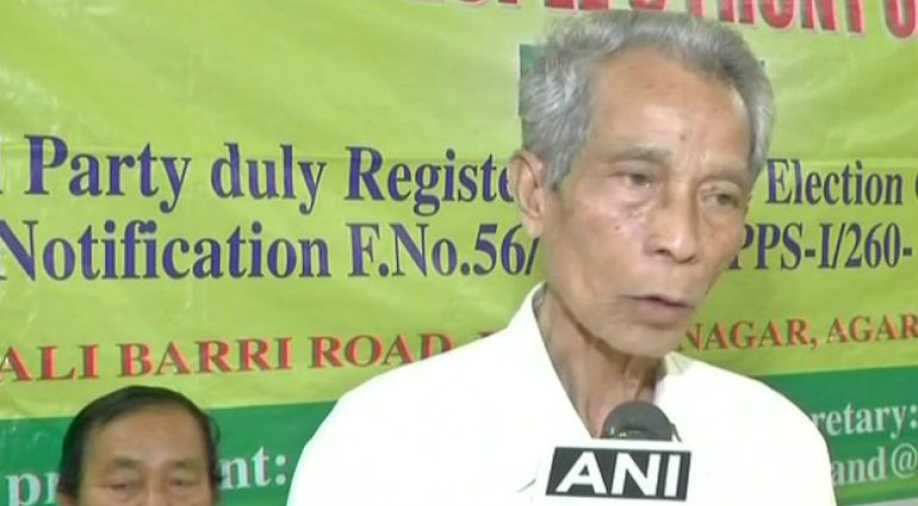 Hours after the announcement of Jishnu Debbarma as the deputy of new Tripura Chief Minister Biplab Kumar Deb, BJP's ally the Indigenous People's Front of Tripura or IPFT has expressed its unhappiness with the decision.

"The people of Tripura wanted to see tribal representation in the cabinet. They wanted the chief minister to be from the IPFT. But it din't happen. There's a difference between the wishes of the people and politics. I am going to discuss this with BJP leader Himanta Biswa Sarma tomorrow," IPFT president N C Debbarma said on Tuesday.

Debbarma had on Monday said that IPFT would support the new government from outside if it was not given 'respectable' positions in the ministry.

Clarifying the meaning of 'respectable' positions, Debbarma said it meant proportionate representation of IPFT legislators in the cabinet and allocation of major departments to them.

No MLA of the IPFT was present in the meeting on Tuesday where Union minister Nitin Gadkari announced the names of Biplab Kumar as chief minister and Jishnu Debbarma as his deputy.

Announcement of Dy CM after Parliamentary Board meeting is BJP's alone. We have discussed this with other senior leaders & will discuss this with Himanta Biswa Sarma & Ram Madhav tomorrow. There's no question of us being pleased or displeased: NC Debbarma, IPFT President #Tripura pic.twitter.com/7qCYVL5IIY

The BJP and the IPFT swept to power in the state, winning 43 seats in the 60-member assembly. BJP bagged 35 seats and the IPFT eight.

Elections were held for 59 seats of the 60-member assembly on February 18.

The IPFT came into being in the late '90s and had campaigned for a separate state for tribals by carving out the Tripura Tribal Areas Autonomous District Council (TTAADC) on the plea that the indigenous people had become marginalised due to the huge migration of people to this state after partition of the country in 1947.

The tribal council area comprises two-third of the state’s territory and the tribals form one-third of the population. The IPFT had forged an alliance with the BJP before the elections on the basis of a common minimum agenda, which included formation of a high-power committee with representations from the central and state governments and the indigenous community to address the problems of the tribals.