Assembly elections 2018: Madhya Pradesh and Mizoram go to the polls 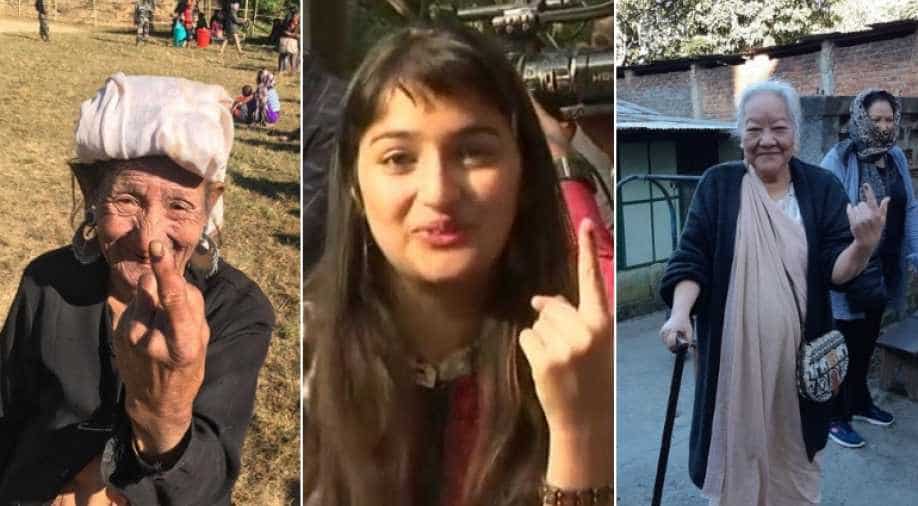 People show off their voting fingers after voting in Mizoram and Madhya Pradesh. Photograph:( ANI )

Mizoram is one of three states currently under Congress rule, while the BJP has been in power in Madhya Pradesh for the last 15 years. The results will be announced on December 11.

Madhya Pradesh and Mizoram went to the polls Wednesday morning.

Amid tight security, polling for Mizoram's 40-member legislative assembly began at 7 am. Madhya Pradesh went to the polls an hour later at 8 am, apart from the Maoist-affected Balaghat district where polling again began at 7 am. Starting an hour earlier will also polling to end before it gets dark.

Mizoram is one of three states currently under Congress rule, while the BJP has been in power in Madhya Pradesh for the last 15 years. The BJP has never formed a government in Mizoram.

The Congress and the MNF (Mizoram's second party) are contesting all 40 constituencies in the state, while the Bharatiya Janata Party (BJP) is fighting in 39 seats.

Voting for 40 constituencies in Mizoram begins. Polling to conclude at 4 pm. #MizoramElections pic.twitter.com/7wHPcVQLsL

The battle for power in Madhya Pradesh's 230 seats is mainly between the Bharatiya Janata Party (BJP) and the Congress. The Bahujan Samaj Party (BSP) and the Samajwadi Party (SP) are also in the fray.

The BJP has fielded candidates in all 230 seats, while the Congress is contesting 229 seats.

I have full faith in the people of Madhya Pradesh, they are simple and innocent people who have been robbed for a long time by BJP: Kamal Nath, Congress #MadhyaPradeshElections2018 pic.twitter.com/t7J1mxan9u

In the previous election in 2013 in Mizoram, the Congress had fielded 40 candidates while it won 34 seats, whereas Mizo National Front (MNF) secured only five seats after contesting 31 seats.

Mizoram People's Conference (MPC) had contested on eight seats but it managed to bag only one.

The elections are being fought between 209 candidates.

The Congress party, which has been in power in Mizoram since 2008, is eyeing a third consecutive term in the state.

Preparations have also been made for 12,026 Bru refugees who are lodged in six relief camps of Tripura to cast their votes at Kanhmun village in Mamit district where 15 temporary polling stations have been set up.

Mizoram: Visuals from a polling station in Zarkawt, Aizawl. Polling for the 40 constituencies in the state will begin at 7 am. #MizoramElections pic.twitter.com/BnKJsWf36E

An elderly woman after casting her vote at a polling station in Kanhmun #MizoramElections pic.twitter.com/95FxeIAyVb