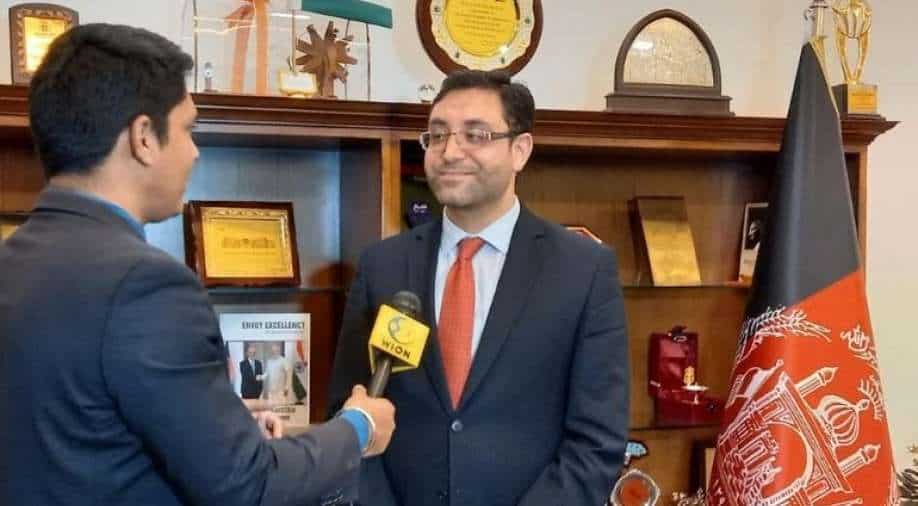 The Afghan envoy to India, Farid Mamundzay in an interview with WION Photograph:( WION )

The Afghan envoy to India, Farid Mamundzay in his first-ever interview to any media has batted for India's inclusion in all Afghan related peace process--like the troika, UN-facilitated, or Turkey process, calling "Delhi an important capital".

Speaking exclusively to our Principal Diplomatic Correspondent Sidhant Sibal, Mamundzay said, "we want India's involvement in almost every peace fora....We hope India would be given its rightful place in all those talks, in all those meetings".

His comments come even as more than 10 countries met in Dushanbe for the Heart of Asia meet. India was represented by its foreign minister Dr S Jaishankar. On the heart of Asia meet, Farid said, " It provides us an opportunity to raise the voice of Afghan people, Afghan republic, and present the gains of the last 20 years to our regional partners".

WION: How do you see the heart of Asia meet furthering peace in Afghanistan?
Farid Mamundzay: The meeting in Dushanbe takes place at a very important time for us, the ongoing peace process, and the meeting of 15 members of the process is significant for us.

WION: Afghanistan is known as the Heart of Asia. The key focus being at that strategic location means connectivity being the focus. How has Afghanistan able to become a central point or a roundabout with connectivity initiatives like Chabahar, Lapis Lazuli corridor?

There are different services done by international entities, some of them will be operationalised in the next decade, or decades to come, the economic situation of the region will change as well as GDP of the region, all this will get positively impacted. So, we look forward to practical cooperation with responsible states in the region, to get to that stage where local or inhabitant of the region deserves to get economic benefit from those activities.

WION: You have just taken charge. We saw high profile visit of Afghan FM. How has your stint been so far in Delhi?
Farid Mamundzay: New Delhi is one of the most important capitals for us, given the fact, India is a strategic partner, the largest contributor to Afghanistan's development in the region. New Delhi is very important to us, it's not only important for govt, our relations, but people to people also existed for centuries. My assignment here will be strengthening those ties, whether they be focusing on security cooperation. we have initiated the economic partnership, trade and transit, and areas of further cooperation which include cultural exchanges, education support which we have been receiving very generously over the years. those will be some of the areas of top engagement.

Our foreign minister was here, a 3-day state visit, where he met his counterpart, he met NSA Ajit Doval and other influential people in the policy-making entities. He was able to consult his counterpart and other officials on the ongoing peace process. the visit was there for bilateral ties as well, it has been his first visit while he has taken charge as the foreign minister and it has been a long time since the last time any Afghan FM visited New Delhi. So, it both for, strengthening bilateral ties and peace consultations.

WION: How do you see India's role in the Afghan Peace process?
Farid Mamundzay: As an important regional power, and as a strategic partner, we want India's involvement in almost every peace fora. Whether it's the troika, whether it's the UN-facilitated sitting, whether it's the turkey process, where there is engagement in the Afghan peace process, we want India's presence to be there. The reason we want India's presence is that India has always adopted a very principled approach to support the people of Afghanistan, democratic values issues significant to Afghan people, human rights, democratic gains, individual liberties, women's rights, minorities rights, so India has been critical in key support in all those gains. And we Afghan people, Afghan govt would like a key ally like India in all those processes. We hope India would be given its rightful place in all those talks, in all those meetings and I hope this will be the case as we go along the other process in the future.

WION: And India's role in rebuilding Afghanistan. From Infra to capacity building?
Farid Mamundzay: If you ask any ordinary afghan, they will be in a better position to tell you what some of the great work India has been doing. From Delaram to Zaranj, from Shahtoot to building Afghan parliament. from initiating Chabahar to small-scale projects across 34 provinces, India has been doing some wonderful initiatives for the Afghan people. If you look at the Indian universities in India, we have more than 60,000 graduates, more than 20,000 studying presently, nowhere in the region or anywhere in the world we have so many afghan students. they are contributing to national building, to state-building. India is helping in state-building in Afghanistan in so many ways, not only, by gifting us development projects and by providing us covid vaccinations, but also by educating our youth and investing in our future. It is incredible to see the belief that Indian leadership has on the youth of Afghanistan, youth which has been ignored for way too long by different actors, India has been investing in them. We are grateful for that support and we are hopeful that it continues for as long as we need it.

WION: How do you see the US proposal of the UN lead process of 6 countries. India is involved in the process. India's EAM spoke about it at the heart of the Asia meet. This even as violence level is increasing.

Farid Mamundzay: It is a sad reality that despite the Doha pact between the Taliban and the US, the level of violence has not reduced, you look at the civilian Casualty report published by the un last year, the Casualty of 2020, there has been civilian Casualty. we support un call for mediation, but we also would like to reiterate the fact that certain principles should be considered. The end state from that peace, an end state where a democratic state will be preserved, where women's rights and minority rights will be protected.

Afghan leadership has been asking our international partners to have an end state where all those values, for which we the afghan for the past 20 years have stood strong alongside our strong partners like India, need to be considered. We welcome the call and support of international partners, regional countries, but want peace that brings lasting stability to Afghanistan and prosperity to the region. Not a process that will further take us to chaos and more and more misery that has been there for way too long. a process that guarantees a peaceful end to the conflict.