About 70% of vaccines used around the world are made in India: S Korean expert Dr Jerome Kim to WION 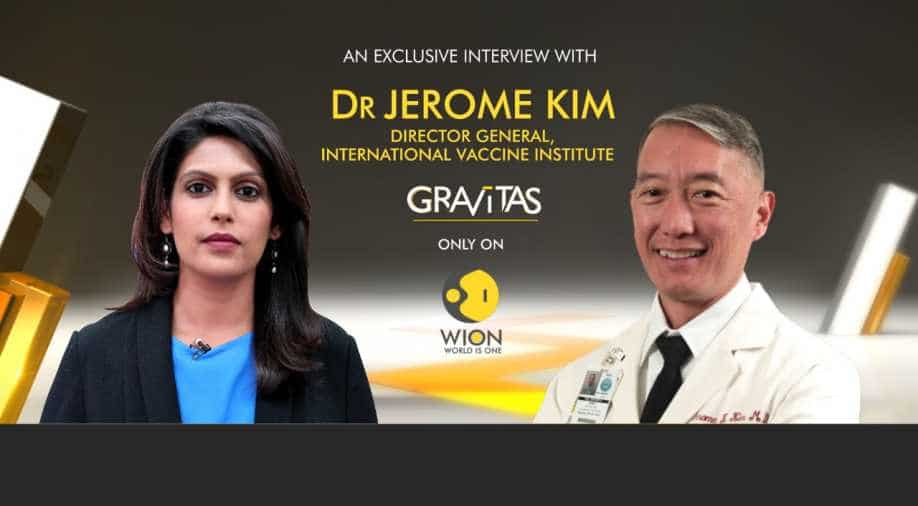 Dr Jerome Kim, a clinical scientist and the world’s leading voice on vaccines who led the US military’s programme on the HIV vaccine, had a lot to say about India’s role in the fight against COVID-19.

Dr Jerome, a clinical scientist and the world’s leading voice on vaccines who led the US military’s programme on the HIV vaccine, also had a lot to say about India’s role in the fight against COVID-19.

Dr Jerome said that with 7 billion people in the world who should potentially be vaccinated, someone has to make the vaccine -- make a lot of doses and make it quickly.

"India has a big role to play, not only because of its population, but we know that India has a very very important vaccine manufacturing industry," he said, adding, "about 70 per cent of the vaccines used around the world for extended immunisation programmes are made in India. Almost every child in the world has received a vaccine, made in India and that’s really important."

"It means Indian companies put out a billion vaccines a year and that’s the kind of capacity we are going to need in order to get this vaccine to the people who need it all over the world not just to people in the United States and Europe, but Asia, India, and Africa. So are going to need companies who have the capacity and the know-how to make vaccines," he stated.

Dr Jerome also mentioned there was something we may be overlooking, saying, "India has great universities and a lot of very talented and intelligent people, a thriving biotech industry and all of those resources could be brought to bear on this, probably the greatest pandemic threat in the last 100 years. India has a lot to contribute."

South Korea is being globally heralded for its response against COVID-19 which helped flatten the curve in the country against the infectious disease. Rigorous testing has been the hallmark of South Korea’s response. Positive cases were promptly isolated and treated. Almost two-thirds of the total patients have recovered.

South Korea's model is now considered the gold standard of fighting against coronavirus.

Dr Jerome mentioned that not all countries were able to begin the process of Testing - Tracking - Isolating and Treating on time, citing the rampant rise in cases in the United States and Italy.

According to Dr Jerome, 98 per cent of the people with COVID 19 infection eventually recover.

WATCH THE INTERACTION HERE | Gravitas Exclusive: India has a big role to play in the fight against Covid-19

India is in the early stage and what the government is doing hopefully could be effective to help limit the spread of COVID-19 in the population. The key is the careful monitoring of the testing and reporting of those tests back to the Central government.