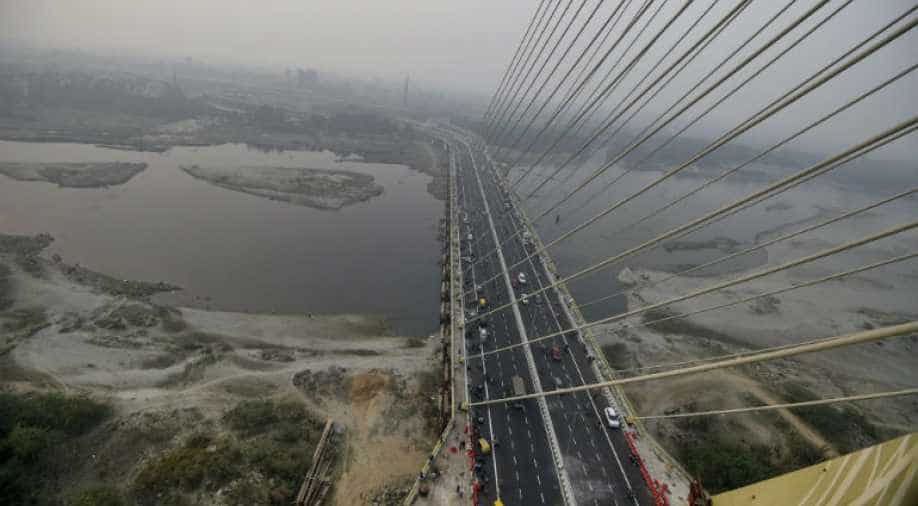 A view from the newly inaugurated Signature Bridge, at Wazirabad in New Delhi, on Monday. Photograph:( PTI )

Delhi BJP president Manoj Tiwari had alleged in his complaint that AAP MLA Amanatullah Khan pushed him down and threatened to shoot him.

The Delhi Police on Tuesday registered three cases, including one against the ruling AAP's MLA Amanatullah Khan, in connection with the ruckus at the inaugural function of Signature Bridge.

The cases have been referred to the Crime Branch of Delhi Police for investigation.

Three cases have been registered at New Usmanpur police station under North East district in connection with the incidents during the inauguration of the Signature Bridge, Delhi Police said in a statement.

The cases have been registered on complaints of Delhi BJP president Manoj Tiwari, his colleague B N Jha and an an Aam Aadmi Party (AAP) worker Taukir, it said.

"All the three cases are being referred to crime branch for further investigation," the statement said.

Joint Commissioner of Police (Eastern Range) Ravindra Yadav said a case has been registered against Khan on a complaint filed by Tiwari.

The state BJP president alleged in his complaint that Khan pushed him down and threatened to shoot him.

Tiwari and his supporters allegedly got into a scuffle with AAP members and police at the inaugural event of the newly-built Signature Bridge here on Sunday.

The Bharatiya Janata Party (BJP) leader had gone to the event to stage a protest for allegedly not being invited to the inauguration despite being Member of Parliament from the area.

Earlier in the day, Delhi Home Minister Satyendar Jain had directed the Additional Chief Secretary (Home) Manoj Parida to lodge a police complaint against Tiwari for allegedly indulging in violence at the Signature Bridge inauguration.

In his note to Parida, Jain said Tiwari and his associates indulged in hooliganism to overawe the highest functionaries of the government at the event where Chief
Minister Arvind Kejriwal and other cabinet ministers were present.

"Manoj Tiwari and his associates formed unlawful assembly, forcibly entered (reached the) dias with the intention to attack and harm the chief minister and council of ministers and create ruckus, obstructed and assaulted public servant..." Jain said in the note.

"It is therefore directed that home department immediately lodges a formal complaint with the CP (commissioner of police) and concerned DCP/police station against Manoj Tiwari and his associates..." he said.

Jain said a CD containing various videos of the event showed the "lawlessness" Tiwari and his associates indulged in.

AAP MP Sanjay Singh accused the Delhi Police of "inaction" in dealing with those responsible for the ruckus at the event and demanded that it register a case against Tiwari.

In a letter written to Delhi Police Commissioner Amulya Patnaik, he asked why Tiwari had not been booked even 48 hours after the incident.

He said the police in the country, particularly in Delhi, worked under "tremendous political pressure".

Earlier on Tuesday, BJP leaders and workers staged protests across Delhi, demanding Khan's arrest and waved black flags at Kejriwal in Nand Nagri, where he had gone to attend an official function.