22 dead due to heavy rains in past 24 hours in Himachal Pradesh: CM Jai Ram Thakur 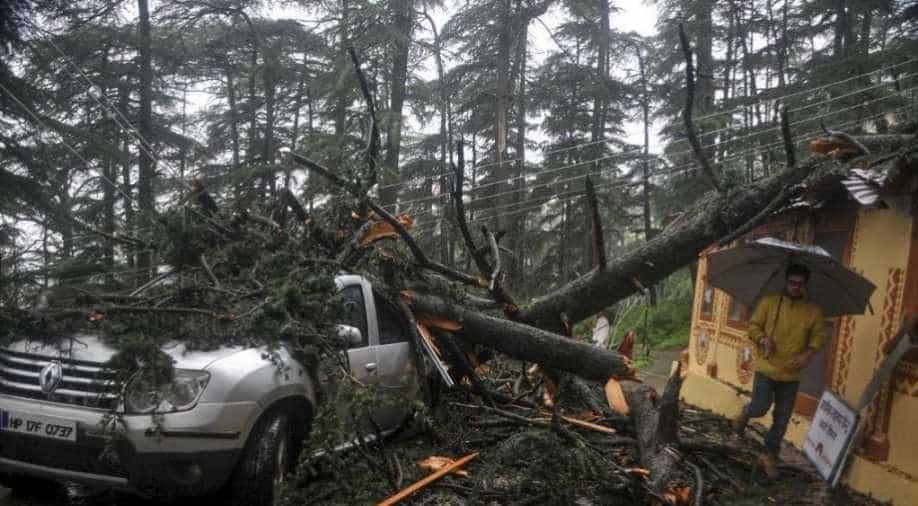 A man walks past a crushed vehicle under an uprooted tree due to heavy monsoon rainfall in the northern hill town of Shimla, Himachal Pradesh. Photograph:( AFP )

The heavy rainfall also affected the normal life in the Hamirpur district.

The death toll in the flood-ravaged Himachal Pradesh has climbed to 22 in the last 24 hours with two people missing in Shimla district following heavy rainfall in the state, said Chief Minister Jai Ram Thakur on Monday.

"The rainfall following in the past three days has caused an estimated 574 crores of destruction in various parts of the state. In the last 24 hours, 22 people have lost their lives. In total, 43 people have lost their lives by the rains in this monsoon season which is a very serious matter of concern. The administration is equipped with all the resources and prepared to tackle the situation. I pray that no more casualty or destruction happens in the coming days," Thakur told ANI.

He further informed that the roads which were damaged by landslides will be restored soon as the restoration work is underway and people stranded at different locations are being evacuated to the different areas in the region.

"Today, I will have a meeting with all the Deputy Commissioners through video conferencing, in the state legislative assembly in which to monitor the flood situation in the state and will listen to their requests if any," he further said.

The traffic movement came to a halt at the Bhuntar-Manikaran road near Sarsadi in Kullu district on Monday after the road caved in following a landslide due to heavy rainfall in the state.

The heavy rainfall also affected the normal life in the Hamirpur district.

A portion of a footbridge over Sutlej river in Chaba area of Shimla collapsed yesterday after the water level in the river increased due to heavy rainfall in the region. The bridge provided connectivity to Shakra, Baaladi, Bindla, and Jedvi villages.