Manchester City stay ahead of United with win over champions Chelsea 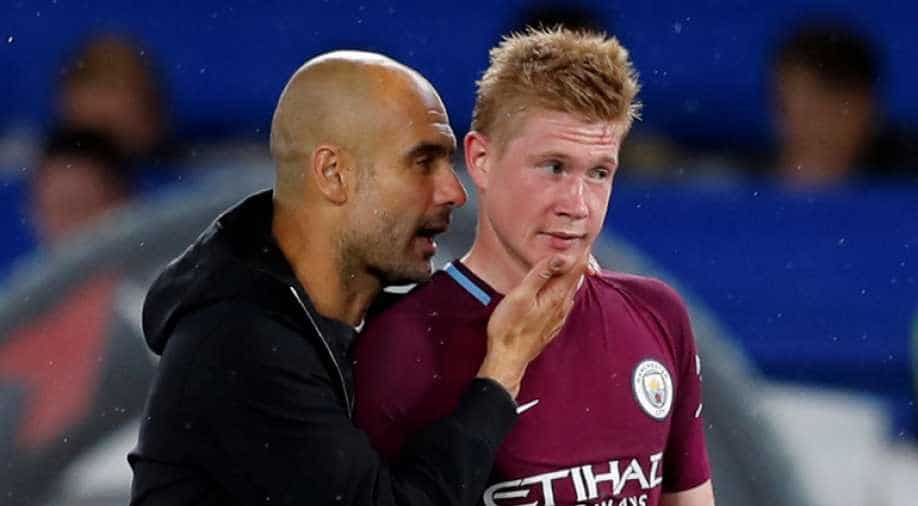 Manchester City stayed ahead of age-old local rivals Manchester United at the top of the Premier League on Saturday with a deserved 1-0 win away to champions Chelsea.

After Jose Mourinho's United romped to a 4-0 victory over bottom club Crystal Palace, City had much the better of the late game at Stamford Bridge.

"We are so happy," City manager Pep Guardiola said. "The way we played, especially in the second half, was pleasing."

The way we played, especially in the second half, was pleasing,' said Manchester City coach Pep Guardiola

A second-half goal by former Chelsea forward Kevin de Bruyne won it and left City just ahead of United on goal difference.

Chelsea, starting the day three points behind the Manchester pair in third place, dropped to fourth after two more goals from Harry Kane helped Tottenham Hotspur to a comfortable 4-0 win away to Huddersfield Town.

Manager Antonio Conte blamed Champions League exertions from midweek for his team's subdued performance. "It is logical when you play three games in seven (sic) days you risk something," he said.

United's win left Palace rooted to the bottom of the table after a record seventh successive defeat without a goal to start the season.

Beaten 5-0 away by City in their last game, Palace avoided a repetition but became only the second team since the Premier League began to lose their first seven games. Unlike Portsmouth in 2009-10, though, they have not scored a single goal.

Juan Mata and Marouane Fellaini scored before halftime and when Fellaini headed in his second just after the interval, the points were made even more secure.

"We started strong and we finished strong," said Mourinho.

England striker Kane continued his astonishing run by following up a Champions League hat-trick in midweek with two more goals as Spurs went 3-0 up by halftime at promoted Huddersfield. Ben Davies scored the other first-half goal and Moussa Sissoko added a fourth just before the final whistle.

Kane, having failed to score at all in August once again, made it 13 for club and country during September.

"Goals to games it is probably the best month I have had, especially after August," he said.

Watford recovered from two goals down at West Bromwich Albion to go fifth after the home team scored twice in three minutes in the first half through Salomon Rondon and Jonny Evans.

Abdoulaye Doucoure kept Watford in contention and Brazilian Richarlison headed an equaliser in the final minute of added time.

Substitute Peter Crouch earned Stoke City a 2-1 win at home to Southampton after Maya Yoshida had equalised Mame Biram Diouf's opener. Earlier Saido Berahino, who has not scored for 30 games, missed a penalty conceded by Southampton's Virgil van Dijk, playing his first game of the season.

In two key games at the wrong end of the table, West Ham United had a late 1-0 win over Swansea City to move above them but Bournemouth were held at home by Leicester City.

West Ham relieved some of the pressure on manager Slaven Bilic when two of his substitutes combined for a dramatic winning goal.

Arthur Masuaku crossed for Diafra Sakho to score, taking the London side out of the bottom three and putting Swansea there instead.

"It was a difficult atmosphere in some ways," West Ham goalkeeper Joe Hart said of a home crowd who grew increasingly restless.

"I'm never going to criticise the fans, they pay their money and have a right to their opinion."

Bournemouth stay bottom but one after dominating against Leicester but failing to score. Jermain Defoe came closest in the second minute, hitting the bar.

In Sunday's three matches, sixth-placed Liverpool meet up with their former manager Rafa Benitez, now in charge of Newcastle United; Arsenal host Brighton and Everton are at home to Burnley.