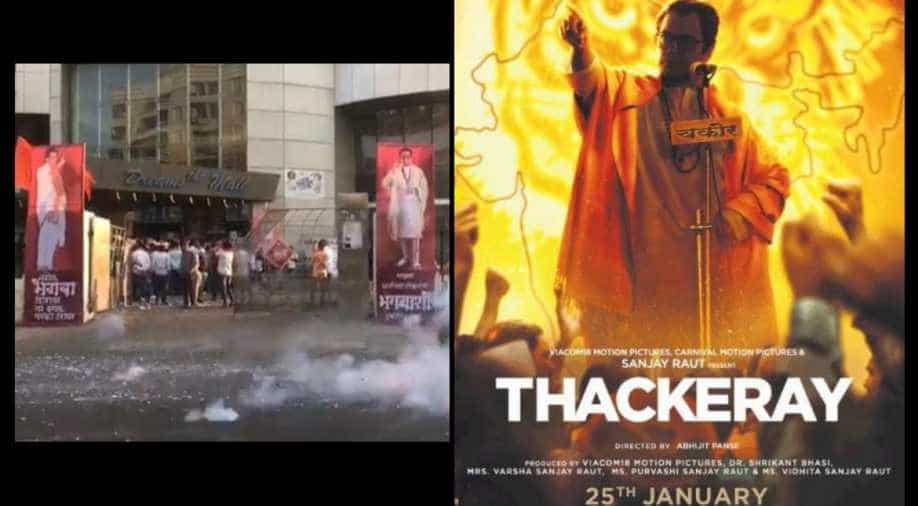 'Thackeray' is a biopic on Shiv Sena founder Balasaheb Thackeray featuring Nawazuddin in and as the man himself.

The Republic Day weekend usually has a lot of moolah riding on it according to Bollywood trade pundits. The theatres opened up to two films today -- ‘Manikarnika: The Queen of Jhansi’ and ‘Thackeray’ as both Kangana Ranaut and Nawazuddin Siddiqui race to woo the audience.

Based on the life of Shiv Sena founder Balasaheb Thackeray who united the people of Mumbai on various fronts and fought for their rights, ‘Thackeray’ opened to a grand welcome by the people. The film released in some theatres in the Maharashtrian capital at sharp 7:45 am.

The first show on the first day was announced as packed to its full capacity.

Shiv Sena workers were seen with drums, dancing on the streets after having watched the film. They even burned firecrackers on the roads, celebrating the film and its release.

Director Abhijeet Panse was also seen at one of the theatres for the first show, probably to gauge the public’s reaction. He apparently walked out of the film's premiere soon after he reached the venue.

Meanwhile, some workers were seen staging a protest outside some theatres including INOX cinema of Navi Mumbai. Apparently, the cinema owners had not put up the poster of the film which irked the workers. After a brief protest, the owners were forced to put up the poster which led to the disbursement of the crowd. This chaos led to the first show at the theatre getting delayed by some time.