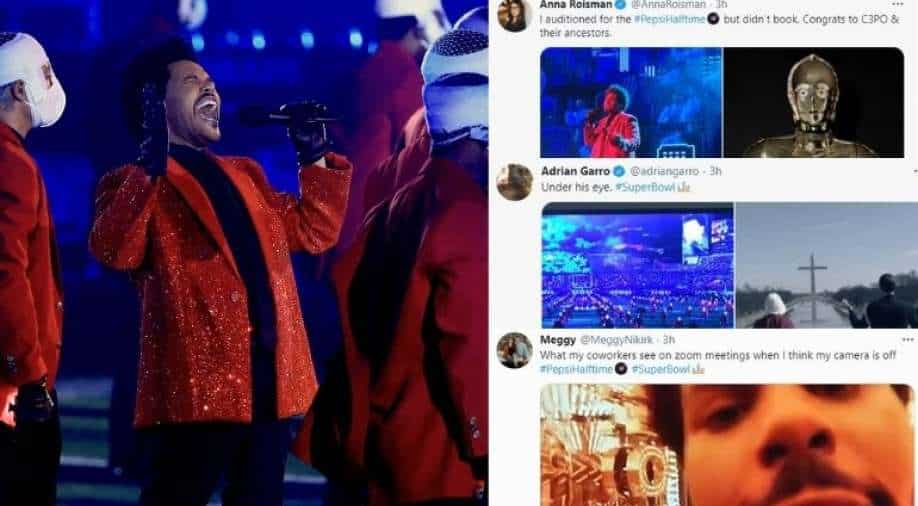 From robotic choirs reminding people of Jawa and droids from the Star Wars, to an army of bandaged henchmen — there were a lot of memorable moments from The Weeknd’s Super Bowl LV Halftime performance.

The Weeknd took the Superbowl halftime stage by fiery music and lots of pop-culture references pointed out by the fans - from Stars Wars to The Handmaids Tale. The spectacle put up by the singer started with a hitch as many complained of the low-sound of the singer's mic but as the performance progressed the theatrics took over, using The Weeknd's music to his narrative.

From robotic choirs, an army of bandaged henchmen, fireworks galore — there were a lot of memorable moments from The Weeknd’s Super Bowl LV Halftime performance.

As he transitioned into singing his 2018 hit 'Can’t Feel My Face,' The Weeknd stepped into a brightly-lit backstage area, a camera tracking his feigned panic, as he rushed to get in place for the number to start.

Twitter users saw this moment and decided to turn it into a meme; with the short clip of The Weeknd rushing backstage and frantically looking around, fans have been given endless leeway in terms of captions. While he sang his breakout hit 'Starboy' with Star Wars' 'Jawa clan' (as pointed out by the Twitteratti), many moments from his $7 million self-financed performance, ended up on Twitter as memes:

My camera roll after I take my phone back from my toddler. #SBLIV #sbhalftimeshow @theweeknd pic.twitter.com/pktxQpNBFM

Me walking into 2021 #TheWeeknd #SuperBowl pic.twitter.com/fEXBSa1IqT

me when i lose my mom in the grocery #TheWeeknd #Superbowl pic.twitter.com/9TvxHbbCAJ

Me arriving to the park in my luxury vehicle to play some mobile weeb Pocket Monster game #TheWeeknd pic.twitter.com/Z6wuJ5k68u

What my samosas are seeing from inside the oven right now #PepsiHalftime #TheWeeknd pic.twitter.com/0gmFHe69lt

Me if I was one of The Weeknd’s dancers when they all started freestyling on the field😂😂 #PepsiHalftime #TheWeeknd #SuperBowl pic.twitter.com/8a7JXvAE2L

I auditioned for the #PepsiHalftime but didn’t book. Congrats to C3PO & their ancestors. pic.twitter.com/pZR4fkVDuc

As stated in the press conference before the performance, The Weeknd kept his otherwise 'R' rated music and narrative simple and PG-13 for the families across.

The singer had addressed the bandages which his background dancers were spotted wearing all over their faces, in an exclusive interview with Variety earlier saying that they’re a commentary about the vanity surrounding celebrities.