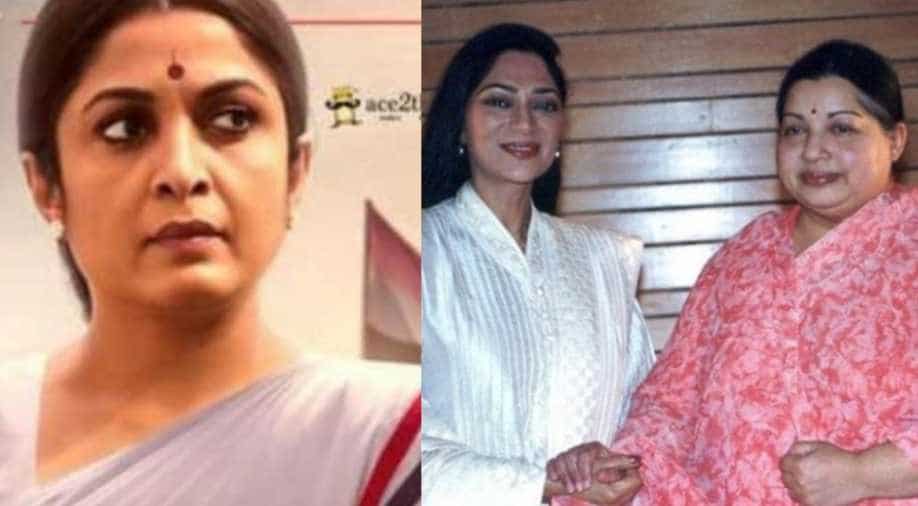 'Baahubali' actress Ramya Krishnan's first look as J Jayalalithaa made quite a buzz on the internet with people giving their thumbs up on the portrayal.

We informed you about a web series being planned on late Tamil Nadu Chief Minister J Jayalalithaa and also shared with you the first look of Ramya Krishnan as the political leader for a web series that is due to launch soon.

This, after a film, is already in the pipeline with Kangana Ranaut in the lead role titled ‘Thalaivi’.

As for the web series titled ‘Queen’, it has been revealed that popular chat show host Simi Garewal was approached to play a part in the show. The makers wanted Simi to enact her part as the talk show host as she once interviewed Jayalalithaa and was able to get her to talk intimate details of her life.

Simi has refused the part as she addressed the same and said in an interview, “The makers called my office a few times, but it seemed wrong to enact my interview with a person who is no longer [with us]. It was out of the question because it would look forced, and it would be lowering my standard. I have my moral reasons to turn it down. But it is, in no way, reflective of the quality of the show. I wish the makers success in retelling the story of one of the most indomitable women of our times.”

Directors of ‘Queen’, Gautham Vasudev Menon and Prasath Murugesan wanted Simi Garewal to recreate the TV series. Jayalalithaa had opened up about her tempestuous relationship with MG Ramachandran, also a popular Tamil actor and later chief minister of the state, and how she pined for her mother’s attention as a child.

Gautham Menon, in an interview said, “We wanted the interviewer on the show to be able to connect with Shakthi and bring out the most candid aspects of her life. Who better than Simi Garewal to do so? Her ability to empathise with the guests made her the perfect fit. However, it didn’t work out. We eventually cast Lillete Dubey. She makes for a great talk show host.”

Ramya Krishnan, a big name down South became a pan-India star with ‘Baahubali’ as she played the character of Sivagami in SS Rajamouli’s 'Baahubali' films.