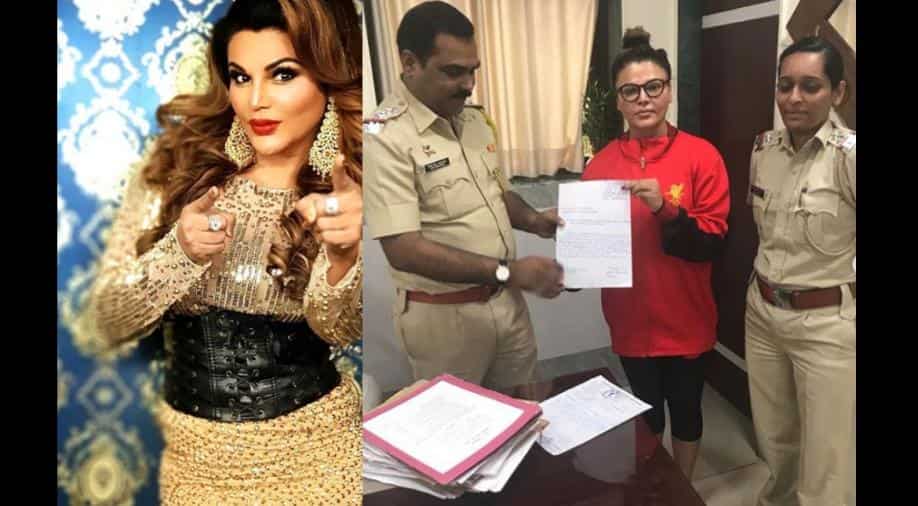 Rakhi Sawant knows how to stay relevant as she manages to pull herself in the Tanushree Dutta-Nana Patekar controversy. It started with Rakhi making shocking revelations about her replacing Tanushree Dutta in the song from 2008 film ‘Horn Ok Pleassss’. She came in news for telling a different version of the story and even slammed Tanushree for maligning Nana’s image.

Now, Rakhi has filed an FIR because she has been receiving death threats over the issue.

For the uninitiated, Rakhi said that Tanushree when asked to film the song was found high on drugs and even fainted on the sets. She said,  “Let that #MeToo movement go to the dogs, I did not want to be a part of this, but you media people have badgered me into hosting this press meet. As far as me replacing me Tanushree Dutta in the song ‘Nathani Utaro’, I was at home one evening when Ganesh Acharya called me asking me to come to the sets. After that, even Nana Patekar called me and requested me to come and shoot for the song."

She added, "At that time I did not know what had happened. Yet I went to the sets and when I got there I see this huge crowd near a vanity van and media people were there too. That’s when I asked what had happened, and Ganesh told me she was (Tanushree) was part of this song, and that she had already shot for a bit, but for the past four to five hours Tanushree had locked herself in the van and was unresponsive. Now I know Tanushree and her hairdresser as well, so I called her thinking she will at least answer my call, then I asked her makeup and hair team what was happening, and they said that Tanushree was unconscious for the past three to four hours. I was surprised to learn that, she was high on drugs and had fainted.”

Rakhi added to her shocking claims that Tanushree was doing all this for publicity and that she wanted to get an entry in Bigg Boss 12. However, that looks out of the question as MNS workers recently threatened the show makers that if she did come in the house as a participant, they will resort to violence.

I will also file a police complaint against the people on Instagram and Facebook who will be using abusive,vulgar, derogatory and violent comments ..please note friends #willnottoleratenonsense

Tanushree has meanwhile been issued legal notices from Nana Patekar and Vivek Agnihotri, both of whom she accused of harassment while filming for their films respectively.  Also read: Tanushree Dutta case: Artistes' body admits 'grievance was not addressed', apologises