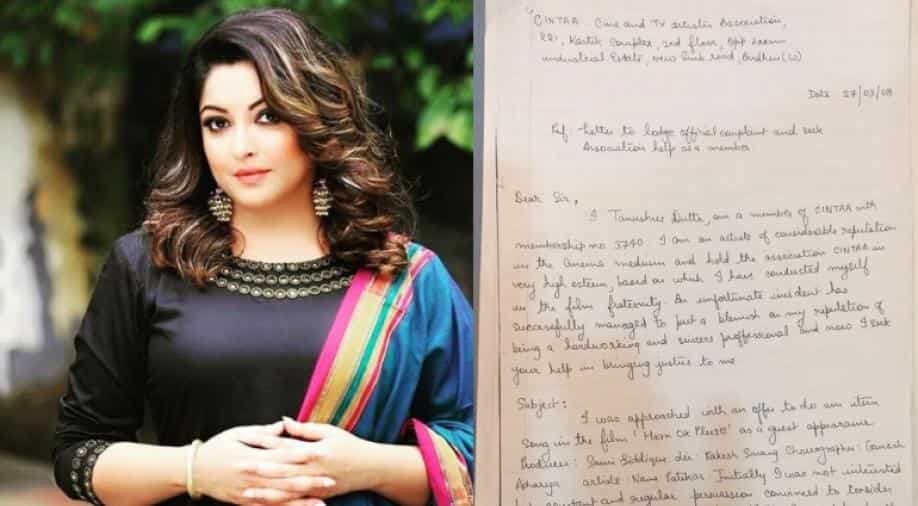 File photo of Tanushree Dutta and a copy of the complaint that she filed at CINTAA Photograph:( WION Web Team )

This could change a few things. Cine and TV Artists Association (CINTAA) has expressed regret for not reacting to Tanushree Dutta's complaint in 2008.

Dutta had filed a complaint with CINTAA a decade ago after she felt uncomfortable shooting a song with Nana Patekar for the film 'Horn Ok Pleassss'.

The actress had alleged the organisation did not pay heed to her complaint.

In a fresh statement, CINTAA said it "strongly condemns any act that outrages the modesty of any individual and any form of sexual harassment is unacceptable to us." "After going through Ms Tanushree Dutta's complaint, which was filed with the then Executive Committee of CINTAA in March 2008, we feel that the decision taken in the Joint Dispute Settlement Committee of CINTAA & IFTPC (then known as AMPTPP) in July 2008 was not appropriate, as the chief grievance of sexual harassment wasn't even addressed."

The organisation said even though it was a different Executive Committee back then, CINTAA finds it "highly regrettable and no apologies can suffice, hence we must resolve today to never allow such lapses to occur again".

"CINTAA stands strongly for the dignity and self-respect of its members. Sexual harassment is a serious criminal offence," the statement read.

According to the guidelines, the current committee of CINTAA cannot deal with cases that date back more than three years and hence Dutta's grievance cannot be addressed in the present day. However, in its statement, CINTAA appealed to the authorities to take cognisance of Dutta's statements and conduct a fresh and impartial enquiry on the matter.

"We also appeal to all our members to report any such incidents to us immediately. We are duty bound to give them our complete moral and legal support to ensure just and safe working conditions," the statement further read.

In a recent TV interview, Dutta claimed that Patekar had misbehaved with her on the sets of the 2008 film. During the interview, she also alleged that the actor had the tacit support of the film's makers.