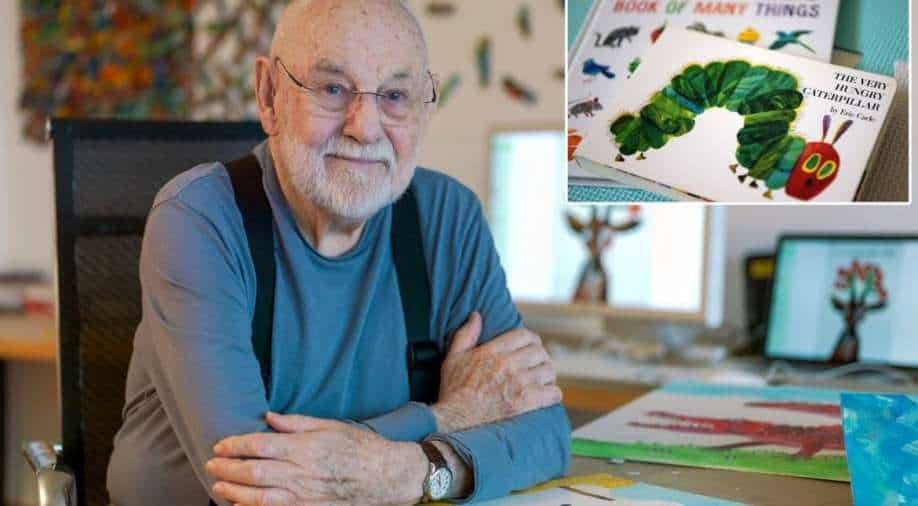 The book, first published in 1969, features a caterpillar who eats his way through many different foods on different days of the week before finally emerging as a butterfly

Eric Carle, author and illustrator of the beloved children's classic "The Very Hungry Caterpillar," has died aged 91, according to a statement from his official Instagram account on Wednesday.

The book, first published in 1969, features a caterpillar who eats his way through many different foods on different days of the week before finally emerging as a butterfly.

With its distinctive artwork and subtle educational concepts, the 224-word book has been translated into 66 languages and sold more than 50 million copies worldwide.

"It is with heavy hearts that we share that Eric Carle, author and illustrator of The Very Hungry Caterpillar and many other beloved classics, passed away on Sunday, May 23rd at the age of 91," the statement read, without elaborating.

It continued: "When asked why he thinks The Very Hungry Caterpillar has remained popular for so long, Carle said, 'I think it is a book of hope. Children need hope. You, little insignificant caterpillar can grow up into a beautiful butterfly and fly into the world with your talent.'

"Thank you, Eric Carle for sharing your great talent with so many generations of young readers," it said.

Carle wrote and illustrated more than 70 books for young children, including "The Grouchy Ladybug," "The Very Busy Spider" and "The Very Lonely Firefly."

"Our hearts are heavy tonight with the loss of our beloved co-founder Eric Carle who has passed away," read a tweet from The Eric Carle Museum of Picture Book Art in Amherst, Massachusetts.

The museum described Carle as "our friend, our inspiration, and a creative visionary for generations of artists and children."

Carle's distinctive collage illustrations are mostly acrylic paint on plain tissue paper. The paint however goes on in different ways - via bushes of different sizes, sometimes fingers, and sometimes stamped on with sponges or even carpet pieces.

"Some children have said to me, 'Oh, I can do that.' I consider that the highest compliment," Carle wrote on his official website describing his work.

"To me pictures need writing and writing needs pictures. A child once called me a picture writer, and that's a good way to describe me," Carle wrote.

Carle was born in Syracuse, New York, in 1929, and moved with his parents to Germany when he was six years old, where he later graduated from a prestigious art school in Stuttgart.

During World War II his father was drafted into the German military and was taken prisoner in Russia, the illustrator told The New York Times in a 2007 interview.

Carle, by then a teenager, survived the aerial bombing of Stuttgart and avoided military service, but was conscripted into digging trenches on a defensive line in western Germany.

He always wanted to return to the United States -- and in 1952, "with a fine portfolio in hand and forty dollars in his pocket, he arrived in New York," the biography on his website reads.

Carle was soon drafted into the US army and stationed in Germany - but according to the Times he never spoke about his youth under the Nazi government.

After his military service Carle worked as a graphic designer in the promotion department of The New York Times, then for many years was the art director of an advertising agency before being asked to illustrate "Brown Bear, Brown Bear, What Do You See?" (1967).

Carle said in various interviews that he preferred bright and soothing colors after so much gray and camouflage green of the wartime years.

Tributes to the author poured in on social media, including from the rich and famous.

"Eric Carle has died- but he left us the unforgettable Hungry Caterpillar, Brown Bear, Brown Bear- books i read to my children and now my grandchildren," tweeted actress Mia Farrow. "Loving thoughts with his family and very much gratitude for Mr Carle."

'Prey' movie review: A raw, gripping return to franchise's roots, this 'Predator' movie is a must watch

'Four More Shots Please!' season 3 to release on this date