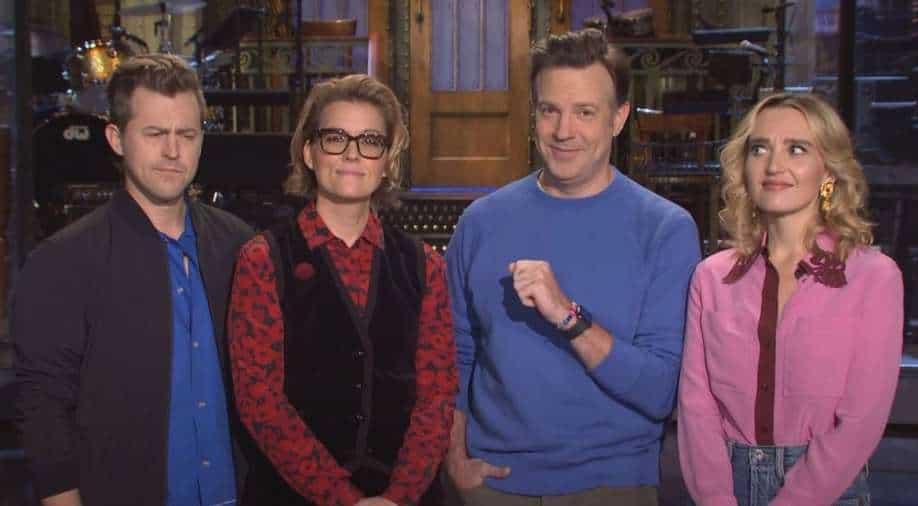 Just like many others, 'Ted Lasso' star Jason Sudeikis is making his Saturday Night Live (SNL) hosting debut this weekend. Guess who's come along? Ted Lasso himself!

The actor, who is also an SNL alum, is beaming with positivity like his character Ted Lasso in the promo that was released on Thursday night.

Jason was joined by musical guest Brandi Carlile along with cast members Alex Moffat and Chloe Fineman. Together they celebrated their collaboration in a joyous manner and the actor-comedian shared what he plans to achieve with his episode.

While Moffat, Fineman and Carlile said that the episode would be 'spooky', 'scary' and will 'have some laughs', Sudeikis promised that "... if we do things right, we just might learn a little someone about ourselves along the way."

After a few exchange of perplexed glances, Sudeikis had to add: "Or not."

In one of the three promo sketches, Sudeikis encouraged a series of "positive affirmations" and guided them all to "manifest it!"

Sudeikis recently talked about coming back to SNL, and reflected upon his long stint with the show, sharing, "I don’t know if working there for 10 years is going to be a plus or a minus."

"I’m looking forward to even just the Tuesdays and Wednesdays, the writing and the read through, you know? Because it feels like being shot out of a rocket ship and people are like, 'It’s already done?' So I’m going to savor the parts of the week that I enjoyed from working there," he said when asked about what's about his return to the show that excites him the most.