I For India concert: Amitabh Bachchan, SRK, Will Smith, Aishwarya Rai & other biggies get together to raise funds for COVID-19 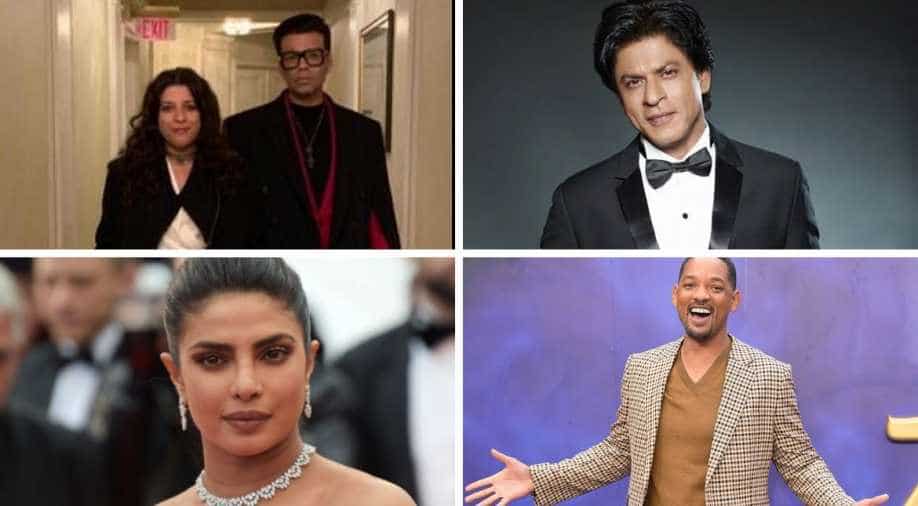 The concert, live-streamed by Facebook, started with Zoya Akhtar and Karan Johar briefing about the purpose of the concert as it aimed at raising money for relief purpose.

It was a fun night for all those who tuned in as the biggest of the stars there are, got together to raise money for COVID-19 relief.

The rock legend Mick Jagger joined the Bollywood guys along with actor Will Smith.

As the event started on Sunday evening, Karan Johar and Zoya Akhtar first told the viewers about the purpose of the event -- that the money raised through the event will go to Give India's COVID-19 Response Fund, which aims to help the coronavirus frontline workers.

The first celeb to perform was Akshay Kumar, who recited a poem - called Tumse Ho Nahi Paega - about achieving the impossible during the coronavirus pandemic and urged fans to help in whatever way they can to change the lives of those who are affected by the coronavirus.

Next were Aamir Khan and his filmmaker wife Kiran Rao, who asked fans to not lose their hope in their fight against COVID-19. The couple sang the tracks Aa Chal Ke Tujhe and Jeena Isi Ka Naam Hai during the concert.

Musical trio Shankar-Ehsaan-Loy played the tracks Senorita and Gallan Goodiyan from their homes and wooed all.

Hollywood actress Kate Bosworth asked fans to donate any amount of money they can to help the needy. Priyanka Chopra, in her segment, asked the viewers to let the doctors and the frontline workers do their jobs to stop the spread of coronavirus and recalled how her parents, who were doctors, always kept the lives of their patients before theirs. She also talked about the healthcare professionals getting attacked and urged her fans to show "support and compassion."

This beautiful poem has so much relevance right now. Thank you my friend @urfvijaymaurya for writing this insightful composition about this unprecedented time. Let's hold on world... let's keep our hopes alive and wait for the world to heal.🙏🏻 pic.twitter.com/J18yrupTzV

Indian-American singer Raja Kumari dedicated a song to her Indian audience. Dia Mirza, who is also an activist, talked about the current situation of stray animals and urged everyone to take care of nature also. Ayushmann Khurrana mesmerised viewers with an only-guitar rendition of all-time favourite song Paani Da from his film Vicky Donor. He also recited a poem about COVID-19.

Vidya Balan delivered a strong message against domestic abuse in a segment while Madhuri Dixit sang a beautiful rendition of Ed Sheeran's Perfect with son Arin playing the piano. Katrina Kaif talked to some experts about India's policies against the COVID-19.

Lyricist Javed Akhtar recited his poem Bhook (Hunger) and asked people to donate so no one has to die because of hunger. Kareena Kapoor and Saif Ali Khan asked viewers to improve relations with loved ones and stay connected with their families during the lockdown. Filmmaker Vishal Bharadwaj and his wife Rekha sang their song O Saathi Re from his 2006 film Omkara.

South stars Rana Daggubati, Shruti Haasan and many others encouraged viewers to play their part in this fight against the coronavirus and stay safe.

Singer Joe Jonas and his actress wife Sophie Turner recalled their India visit in their segment and asked viewers to be safe by following the lockdown rules.

Cricketer Virat Kohli called the frontline workers "superheroes" while his actress wife Anushka Sharma talked about the new normal we live in. Actor Farhan Akhtar performed the track Tum Ho Toh from his film Rock On! with his band.

Giving his message a funny twist, Canadian comedian Russell Peters, along with his donation message, joked about coming to India in a different circumstance and said: "If I ever get kicked out of North America, you will see a lot of me there."

Veteran lyricist Gulzar as well as rock legend Mick Jagger touched upon the issues faced by the poor amid the coronavirus lockdown and urged people to help them by donating money.

Meanwhile, Hollywood star Will Smith, who has visited India more than once and has also worked in a couple of Bollywood films, said: "India holds a really warm and special part in my heart. It is like a home away from home for me." He then talked about the difficulties the daily wage workers are facing without "income, food and home."