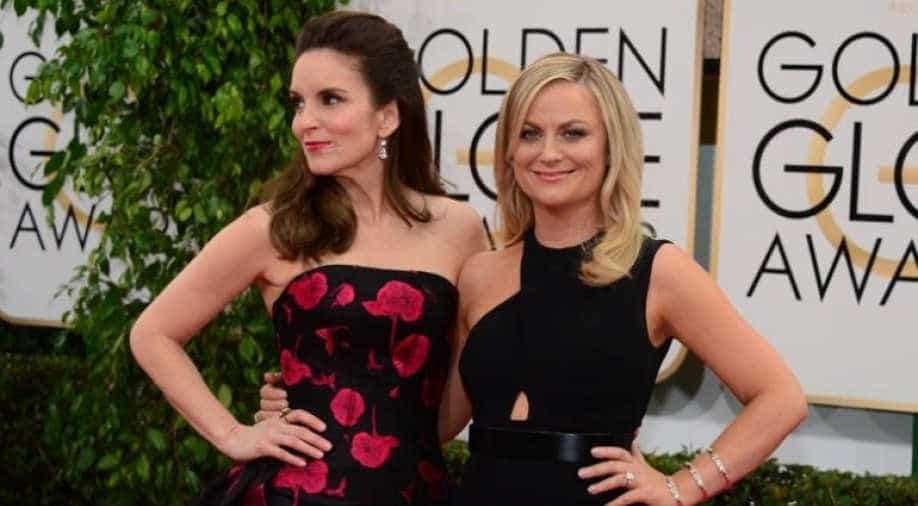 While their comedic shenanigans are underway, the hosts started the night with a monologue, addressing the elephant in the room'. Poking fun around the diversity controversy, the award show, and the organisation, Hollywood Foreign Press Association, the ladies talked about lack of diversity.

Amy Poehler and Tina Fey are back to their hosting duties at the 78th Golden Globes, currently streaming from across the coast.

After a more than five-year break, Amy Poehler and Tina Fey are reprising their roles as co-hosts of the 2021 Golden Globes, with a major pandemic-twist.  For the first time in the show's history, the Saturday Night Live alumni kicked off the show, with Amy at the Beverly Hilton in Los Angeles and Tina at 30 Rockefeller Center's Rainbow Room in New York City.

While their comedic shenanigans are underway, the hosts started the night with a monologue, addressing the elephant in the room'. Poking fun around the diversity controversy, the award show, and the organisation, Hollywood Foreign Press Association, the ladies talked about lack of diversity.

Tina quipped, "Soul is a beautiful Pixar animated movie where a Black man's soul is knocked out of his body and into a cat. They responded to this because they have five cat members." They rounded out their monologue by Amy acknowledging, "This is probably something we should've told you guys about earlier. Everybody is understandably upset at the HFPA and their choices."

"Look, a lot of flashy garbage got nominated but that happens, okay? That's like their thing," she continued. "But a number of Black actors and Black-led projects were overlooked."

Tina added, "Look, we all know award shows are stupid... The point is, even with stupid things, inclusivity is important and there are no Black members of the Hollywood Foreign Press Association. I realize, HFPA you many not have gotten the memo because your workplace is the back booth of a French McDonald's, but you have to change that."

Before the awards, the Hollywood Foreign Press Association previously released a statement acknowledging the lack of diversity among their members. They promised to address this problem, writing, "We understand that we need to bring in Black members, as well as members from other underrepresented backgrounds, and we will immediately work to implement an action plan to achieve these goals as soon as possible."

A few days after Los Angeles Times expose on Hollywood Foreign Press Association, the organisation behind the Golden Globe Awards, many celebrities who are a part of Hollywood's Time's Up are calling out the functioning of the ceremony.

When nominations were announced, the HFPA was criticised for not including any Black-led movies, like 'One Night in Miami', 'Ma Rainey’s Black Bottom', 'Da 5 Bloods' or 'Judas and the Black Messiah', in the Best Picture category. Ahead of the 2021 Golden Globes on Sunday, the HFPA released a statement to the press on Friday.

An HFPA spokesperson told the LA Times that Flaa’s claims are “entirely false,” but said the organization is “committed to addressing” its lack of diversity. Read more here.