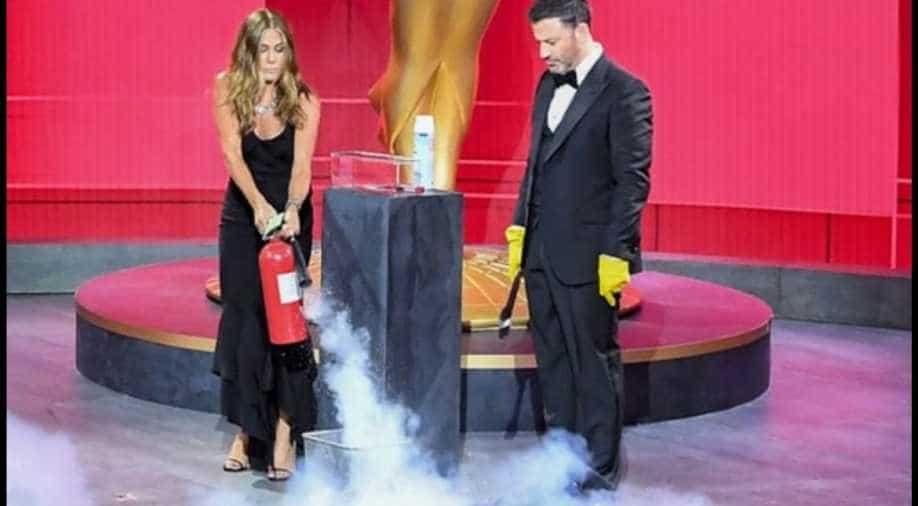 Jennifer Aniston and Jimmy Kimmel at the Emmys Photograph:( Twitter )

Jimmy Kimmel hosted the largely virtual ceremony with only him and a handful of celebs who came as presenters.

It could have been dull but who are we kidding? Jimmy Kimmel and Jennifer Aniston gave a fiery start to the 72nd Television Academy Awards aka the Emmys 2020. Emmy Awards 2020: 'Schitt's Creek', 'Watchmen', 'Succession' pick up major wins

Jimmy Kimmel hosted the largely virtual ceremony with only him and a handful of celebs who came as presenters. The rest of the show had celebs tuning in from their homes.

But we call it fiery as Jennifer Aniston was spotted putting out the fire with a fire extinguisher at the venue, dressed in a sleek black gown with diamond jewellery.

Jennifer Aniston puts out a fire and saves the #Emmys! pic.twitter.com/hUBfzVzTn8

The duo took every precaution to ‘sanitise’ the envelope -- in which they sprayed the paper with a lot of disinfectant and then threw in a bucket to be put on fire. It was a joke!

Then the two announced that Catherine O'Hara took home the trophy for her performance in ‘Schitt's Creek’ -- the first award of the evening.

Earlier in the day, the actress had shared her prep as she was seen in pajamas with a glass of wine in her hand and a mask on her face. She wrote,  "Emmys prep... In my other mask." She congratulated her fellow nominees and added, "Congratulations to the nominees and all of the amazing performances we've seen this year."

The Emmys 2020 was a less glam version of itself due to the coronavirus pandemic.