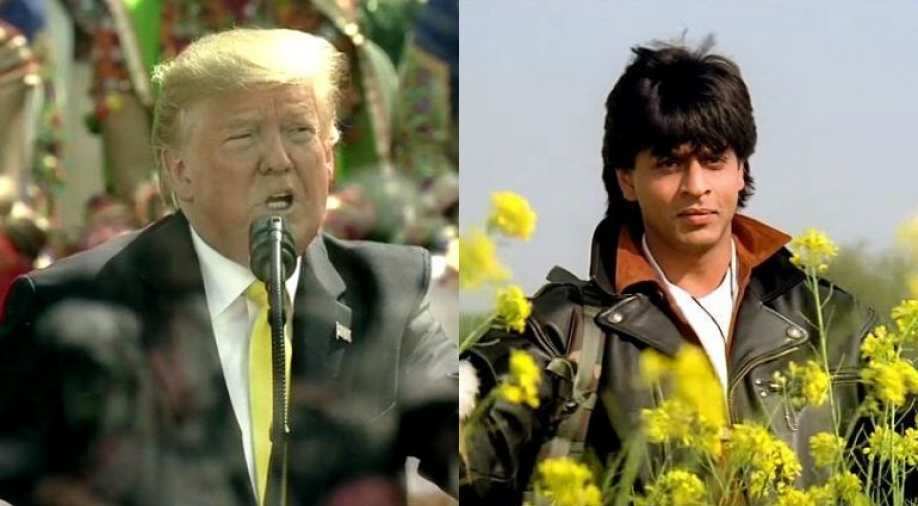 Trump adressing crowd at Motera stadium and SRK in a still from DDLJ. Photograph:( Twitter )

This is not the first time that DDLJ has been mentioned by an American leader. Five years ago, when Obama, who was then the President of US, had visited India, he had quoted a famous line from SRK's film during an event in New Delhi.

Looks like Shah Rukh Khan's Dilwale Dulhania Le Jayenge is a favourite in the White House. Donald Trump, in his speech at the Motera Stadium in Ahemadabad, mentioned the impact that Bollywood films have all over the world and the joy cult classics like DDLJ and Solay bring to people's lives.

"People take great joy in scenes of bhangra, music, dance, romance and drama and classic Indian films like DDLJ and 'Sholay',"Said Trump in his speech as he thanked people for the welcome and praised PM Modi for his leadership. Gujarati delicacy Khaman, masala chai served to President of United States

This is not the first time that DDLJ has been mentioned by an American leader. Five years ago, when Obama, who was then the President of US, had visited India, he had quoted a famous line from SRK's film during an event in New Delhi. While answering a question addressed to him, Obama had said, "Senorita, Bade Bade Desho Me...' to thunderous applause. Catch all the live updates of Trumps Ahmedabad visit here.

Trump's mention of the film on Monday, too got a similar response as the crowd went mad cheering at the mention of their two favourites Bollywood films of all time. Melania Trump, Ivanka stun in spring fashion as they arrive in India

Fans of the film shared clips on Twitter of both Trump and Obama quoting DDLJ and called the film timeless.

President Of United States Donald Trump At The Motera Stadium In Ahmedabad!..

Bollywood Is Not Bollywood Without @iamsrk ❤❤

There is NO ONE who can match the stardom of SRK❤️pic.twitter.com/1He8GpN3Hs

No matter how many films Bollywood or Hollywood makes, DDLJ is the winner for decades to come. Period. From Obama to Trump, DDLJ has always been getting the special mention. All countries in the world have FANs of DDLJ and they play music of DDLJ everywhere #NamasteyTrump pic.twitter.com/PjtN68Swc3

On a two-day visit to India, Trump visited Sabarmati Ashram and Motera Stadium in Ahmedabad on Monday and will be visiting the Taj Mahal with his family later in the day. On Tuesday, he will be in New Delhi.