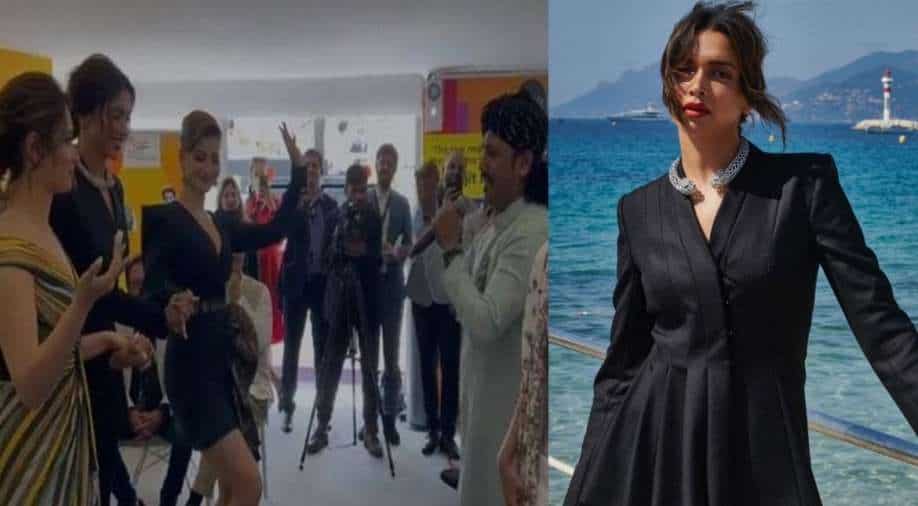 This year India is at the centre of focus at the Cannes as it has been chosen `Country of Honour`at Marche du Cinema.

During the inaugural event, Mame Khan, who is part of the Indian contingent, broke into a beautiful song at everyone's request and Deepika, Pooja Hegde, Tamannaah Bhatia and Urvashi Rautela were seen dancing in unison.

The entire event became more captivating when all the ladies came together and started showing off their Indian moves to Mame Khan`s soulful melody.

Another video of this jubilant inauguration was shared by Information and Broadcasting Minister Anurag Thakur on his Twitter handle.

Sh Mame Khan, folk artist and music composer enthralled the audiences at the inauguration of India 🇮🇳 Pavilion with an impromptu song.

This year India is at the centre of glory at the Cannes as it has been chosen `Country of Honour`at Marche du Cinema. A delegation of celebrities including filmmaker Shekhar Kapur, Ricky Kej, Prasoon Joshi, folk singer Mame Khan and actors Nawazuddin Siddiqui, R Madhavan, Pooja Hegde and Tamannaah Bhatia among others are representing India’s content prowess at the international stage.

Also Read: Huge honour, not something our country has seen often, says Deepika Padukone at Cannes 2022

Meanwhile, speaking at the inaugural event of the India Pavilion, Deepika expressed immense pride in representing India at the 75th edition of the Cannes Film festival as one of the jury members and how Indian cinema has come a long way. "We have the talent, we have the ability and I think we just sort of need that conviction and I truly believe there will come a day when India won`t be at Cannes, Cannes would be at India," the actress said.