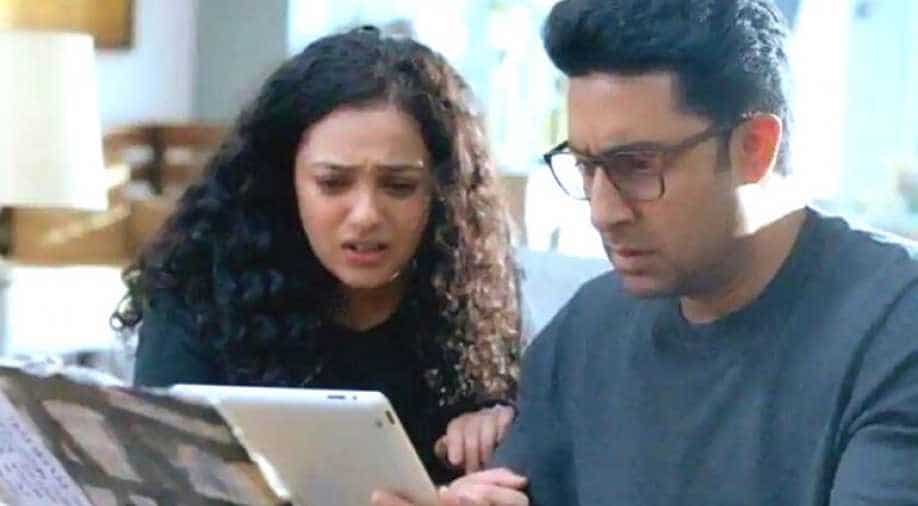 Nithya Menen and Abhishek Bachchan in a still from 'Breathe:Into The Shadows'. Photo via Amazon Prime Photograph:( Others )

'Breathe: Into The Shadows' review: The show's biggest enemy was its expectation. In case you haven't seen the first season, you might just get more impressed.

After making us wait for 2 years, Amazon Prime's 'Breathe' is back with its second season! 'Breathe: Into the Shadows' marks the digital debut of both its lead characters. Bollywood actor Abhishek Bachchan steps into the OTT space, following the footsteps of many in the film industry. It also marks the digital debut of Malayalam actress Nithya Menen who was last seen in 'Mission Mangal,' which was also her debut in Bollywood. Mayank Sharma once again returns as the director of the show and the episodes are approximately 40 minutes long.

The plot is summed up by the show's tagline- “a father’s love can save a life.. or take one." Someone has kidnapped Dr. Avinash (Abhishek Bachchan) and Abha's (Nitya Menon) 6-year-old daughter-Siya. Their daughter is also a juvenile diabetic patient and needs insulin injections four times a day. After establishing no contact for almost 9 months, the kidnapper starts sending puzzling messages, asking the couple to execute some killings to save their daughter. One thing which really stood out in the narrative was that unlike the cliche roles we are used to seeing, here both Avinash and Abha were truly equal partners in crime. From figuring out the cryptic messages to planning the killing and even executing them, 'Breathe S2' is never a one-man show.

On a parallel subplot, we get to see Kabir Sawant (Amit Sadh), who reprises his role from the previous season as a police officer. Unlike the last time, he is no longer seen with an alcohol bottle in every other frame and has taken a transfer from the Mumbai Crime Branch to Delhi. The first appearance of the character is in jail, leaving us all in shock.

For the creators, it is always more challenging to impress the audience with the second season. The task becomes even harder when the previous one was appreciated by the audience. Which explains why 'Breathe season 2' falls under the cracks. From the first few episodes, one would realise that the 'wow factor' was blisteringly lacking.

The show's biggest enemy was its expectation. In case you haven't seen the first season, you might just get more impressed.

For starters let's talk about the characters. I felt that the characters of Avinash and Abha could have been explored much more. Other than the average acting, the plot rushed into the narration of events rather than displaying their emotions when the scenes demanded. For instance, as a viewer when the couple found out that their child was missing, one would have liked to see more of what they were feeling at that moment. Even the aspect of inner consciousness after each of the killings was just not impactful-  maybe even missing. Honestly, there was no dialogue or scene which actually stays with the viewer after the episodes are over.

It was not only the emotional aspect that's missing, but even the mystery and suspense created is not that great. What the audience expects from a thriller are nail-biting scenes and gripping plot points but we bearly get to see any of that. In fact, the subplot of Kabir Sawant was much more interesting than the main one. Sadh's acting, his character's on the spot thinking and witty retorts were a pleasure to watch on screen. This season completely belongs to Amit Sandh, who saves this ship from sinking. Whatever little mystery and drama we get from the show is courtesy Kabir Sawant.

The narrative of the plot is more or less flat, with not-so-complicated or surprising twists and turns. They fail to keep you hooked on to the show. A part of the reason is that the killings and planning that went behind it, turn out to be extremely predictable. On the contrary, the first season boasted of clever and innovative writing, making Danny Mascarenhas' (Madhavan) next move unforeseeable. However, here that element in writing just seems to be missing.

At the end we are left with a few questions:

Who kidnapped Siya? Will she ever come back to her parents? How far will her parents go to save her? Is there any link between the killings?

Keeping my fingers crossed and hoping that the season picks up and gives us the psychological thriller we all signed up for.