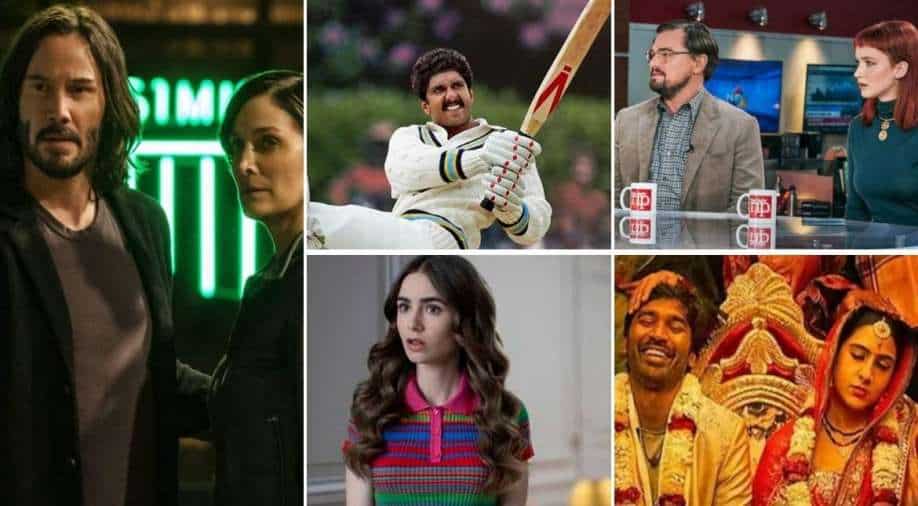 With so many films and series releasing this Christmas weekend, confused which one to watch and where? Don't fret, we have you covered.

A day before Christmas, some of the biggest and the most anticipated films of the season hit screens. Bollywood sports drama '83' - featuring Ranveer Singh as Kapil Dev- opened to theatres across the country has received mostly positive reviews from critics. Keanu Reeves made a comeback as Neo in 'The Matrix: Resurrections' which was released on December 22.

On OTT, Netflix released the satirical comedy 'Don't Look Up' starring some of the biggest names in Hollywood. Leonardo DiCaprio and Jennifer Lawrence headline this ensemble film about a comet heading towards the earth and how mankind is reacting to the impending doom. Akshay Kumar and Dhanush, two of the biggest names in Indian cinema team up with Sara Ali Khan for Anand L Rai's 'Atrangi Re' which hit Disney+Hotstar. Netflix also released the second season of 'Emily In Paris' where Emily takes on new adventures in the French capital.

With so many films and series releasing this Christmas weekend, confused which one to watch and where? Don't fret, we have you covered. Read WION's review of these films to decide which one should be on your watchlist this festive weekend.

Kabir Khan narrates the inspiring story of the Indian cricket team which were considered underdogs at the 1983 world cup. With odds against them, the team, headed by Kapil Dev went to win the historic championship. For WION, Shomini Sen writes, "The plot is known to all cricket buffs all too well. India played reigning champions West Indies team at World Cup 1983 in the UK. No one, including members of the cricket board in India and some of the players, believed that the team had a chance to win the coveted cup. But as the team went on to win the initial matches, hopes of not just the team but of Indians across the world rose." Read the full review of '83' here.

Neo and Trinity are back together. For WION, Zeba Khan writes, "Keanu Reeves’ Neo is back where he started – being Thomas Anderson, only now he is no longer the illegal hacker of 1999 but a video game developer for Warner Bros. It’s been 18 years since we saw Neo ‘The One’ save humanity from robots in a sci-fi world where we’ve been enslaved by machines and we no longer know the difference between reality and illusion! " Read the full review here.

Anand L Rai, known to create beautiful love stories like 'Tanu Weds Manu' and 'Raanjhana' teams up with writer Himanshu Sharma and actor Dhanush. In WION's review, Shomini Sen writes, "Filmmaker Anand L Rai' and writer and producer Himanshu Sharma, have earlier worked together in films like 'Tanu Weds Manu', 'Zero', Ranjhana. In all these films, female characters are usually rebels, feisty and bossy. 'Atrangi Re' is no different. Rinku is not an easy person to be around which perhaps makes her more attractive for the opposite sex." Read the full review here.

A comet is hurtling towards the earth but instead of acting upon it and trying to figure out how to protect the planet from impending doom, people are more interested in the possible jobs that will come along with the extraction of minerals from the comet. Andy McKay satirical film is full of absurdities yet seems very real. In WION's review, Shomini Sen writes, " Michigan state scientist Dr Randall Mindy(DiCaprio)  and PhD student Kate Dibiasky (Law) are suitably excited one night when they discover a comet. Their excitement in hours turns into fear as they realise the comet is coming straight at Earth which can lead to the destruction of mankind.  With the help of the NASA chief, they manage to get an appointment with the President of the United States Janie Orlean (Meryl Streep), who after making them wait for a day, finally is willing to devote 20 minutes of her time to the concerned scientist. She and her son Jason(Jonah Hill), who is the Chief of Staff have other things to worry about like leaked nude photos sent to a probable cabinet advisor, the mid-term polls etc." Read the full review here.

The very American Emily (Lilly Collins) won hearts in the Netflix show 'Emily In Paris' last year and now is back in the second season of the series. Pragati Awasthi for WION wrote, "Season 2 picks up from where the first season ended and shows Emily in deep guilt & sorrow over the mistake she's made. However, she has been told about how Paris, the city of love, is the place where people fall in love and make mistakes, and it's normal, but for the very American Emily, it is a very big deal." Read the full review here