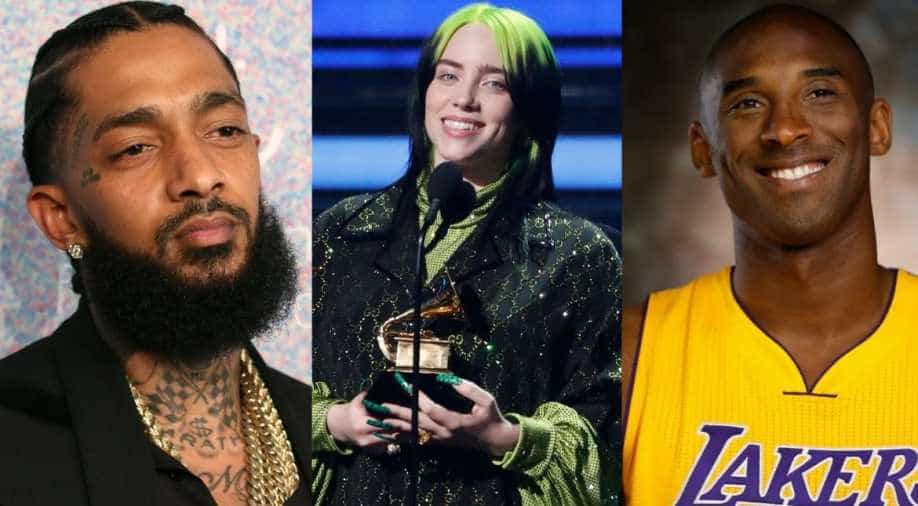 It was a starry night as expected at the 62nd Grammys but there was a sad nip in the air with basketball legend Kobe Bryant’s death news surfacing only a few hours before the music awards night kicked off.

It was a starry night as expected at the 62nd Grammys but there was a sad nip in the air with basketball legend Kobe Bryant’s death news surfacing only a few hours before the music awards night kicked off. Almost all celebs that came to the occasion, dressed in their finest best, paid a tribute to the sportsman who died in a chopper crash along with his 13-year-old daughter.

With a special tribute paid to the star as the Grammys host, Alicia Keys spoke of how important it was to remember Kobe at a stage like this, there was another star who had a special tribute for him -- late rapper Nipsey Hussle who was fatally shot in Los Angeles on March 31, 2019. He was merely 33-years-old then. Meek Mill, Roddy Ricch, YG, and Hussle’s band took the stage to celebrate the music’s biggest night with some hit numbers.  This followed with DJ Khaled and John Legend’s performance on their single ‘Higher,’ which they recorded with the late rapper. Read more about Kobe Bryant's shocking death here.

When artists come together to celebrate the great @NipseyHussle and the great @kobebryant. Legendary. #GRAMMYs pic.twitter.com/GEd1Ew3Q7z

The night turned out to be quite magical for one person though -- 18-year-old artist Billie Eilish who not only got to perform at the Grammys for the first time but took home the four big prizes of the night including Song Of The Year, Artist Of The Year, Record Of The Year and Best New Artist. She also won Best Pop Vocal Album. It was a major loss for Lizzo who had the highest number of nominations at this year's Grammys but lost out to Billie on all big awards. She, however, took home Best Pop Solo Performance and Best Traditional R&B Performance and Best Urban Contemporary Album.

.@billieeilish and @finneas backstage at the @GRAMMYs. https://t.co/ZsIRBcMrjn

Among the top performers of the night was Lizzo who opened the ceremony. Demi Lovato, Ariana Grande, Alicia Keys, Aerosmith, The Jonas Brothers and Tyler gave some memorable performances of the night. Korean pop band BTS also performed to much delight of the audience and social media fans, ARMY, as they identify themselves with.

Check out all the fashionable red carpet looks from the Grammys here.