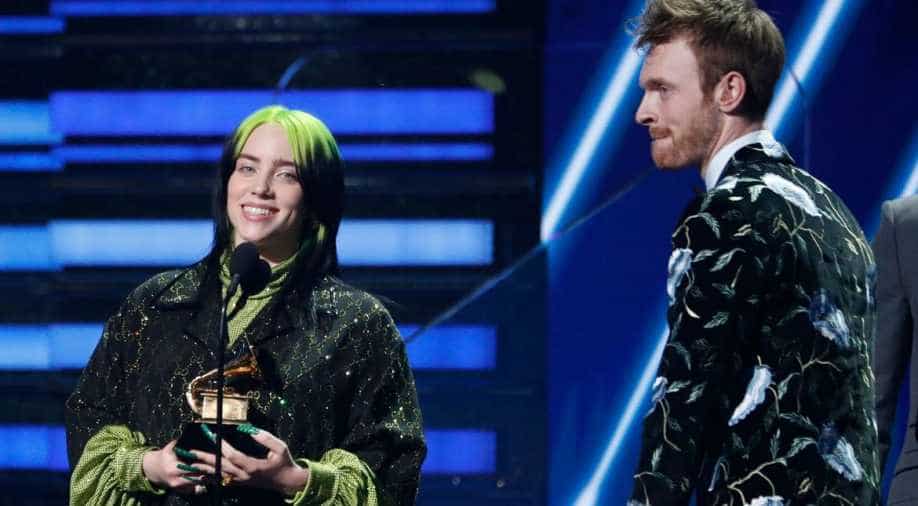 Billie Eilish is all over the place today as she picks her fourth big Grammy -- Record Of The Year -- 'Bad Guy'.

And she strikes again! Billie Eilish picks up the third big award for the night -- Album Of The Year -- ‘When We All Fall Asleep, Where Do We Go?'

Congrats Album Of The Year Winner - ‘When We All Fall Asleep, Where Do We Go?’ - @billieeilish #GRAMMYs pic.twitter.com/UAwiP3WuXK

Another big win for Billie Eilish as she wins Best New Artist.

Check out all the fashionable red carpet looks from the Grammys here.

Song Of The Year goes to Billie Eilish and Finneas for 'Bad Guy'.

John Legend, YG and DJ Khaled performed a medley of Nipsey songs alongside Meek Mill, Roddy Ricch and Kirk Franklin as part of the Grammys’ tribute to the rapper.

Back with a bang! Demi Lovato gave a standing ovation-worthy performance this Grammys.

Mickey Smith Jr is this year's Music Educator Award recipient. The Recording Academy celebrates the Maplewood Middle School teacher for his contribution to the field of music education.

We celebrate the Maplewood Middle School teacher for his contribution to the field of music education! #GRAMMYs https://t.co/2xSbd1DR8w

It's time for some excitement as K-pop band BTS take over the 62nd Grammys stage.

We know where BTS (@bts_bighit) are, where is the #BTSArmy? 💥 #GRAMMYs pic.twitter.com/TRJ5sE0lRW

Aerosmith is #MusiCares 2020 Person Of The Year.

.@Aerosmith is #MusiCares 2020 Person Of The Year. Walk this way to support @MusiCares: https://t.co/kthdbeRYeR pic.twitter.com/eaIOHUdm3g

Billie Eilish is here for her debut Grammys performance.

No, we can't just let it go. @billieeilish, this performance is 🙌🙌🙌 #UnexpectEverything pic.twitter.com/6XXvQtkV6M

She is the youngest nominee in all four general field categories.

Look who's here! Ariana Grande turned the Grammys stage a shade brighter with her '7 Rings' performance.

Camila Cabello dazzling in a pink gown is now performing at the Grammys stage.

Usher and Sheila E. perform special Prince tribute at 2020 Grammy Awards. The Prince tribute is just a teaser for the Let's Go Crazy: The Grammy Salute to Prince concert scheduled for next Tuesday night.

This love is gonna last. 🎶💜 @Usher + @SheilaEdrummer giving us a beautiful tribute to @prince 🎶💜 #GRAMMYs

Tyler, The Creator turned the 62nd Grammy stage into a burning pit as he and the dancers literally burned everything in their way.

They are now performing at the Grammys stage.

The feeling when you win for Best Metal Performance! 🎵 https://t.co/25Me6LxmqB #GRAMMYs pic.twitter.com/6xGnOY8qE0

The Jonas Brothers take to the stage and we can't keep calm!

Give us 5 more minutes of this #GRAMMYs performance, please. @jonasbrothers 💥

Real -life couple Gwen Stefani and Blake Shelton give us cute couple vibes as they share the Grammys stage for the first time.

Nobody but @blakeshelton and @gwenstefani could make us feel the way we do watching them together on the #GRAMMYs stage for the first time. ❤️

Remembering Kobe Bryant tonight while we honor music in the house that he built. Thank you @aliciakeys and @BoyzIIMen for the tribute. 🙏 pic.twitter.com/lKlml9gF8H

Lizzo, with the highest number of nominations tonight, stunned one and all with her scintillating performance at the Grammys.

RT if you're feelin' good as hell thanks to @lizzo's opening performance. 💥 #GRAMMYs

Incredible opening performance by one and only @lizzobeeating 🙌❤️✨ #GRAMMYs

The Jonases -- three brothers and their wives looked stunning as they posed at the red carpet.

Check out what Nick Jonas and our desi girl Priyanka Chopra stunned in:

Dolly Parton wins an early Grammy -- her 10th competitive Grammy Award. She picks it up for best contemporary Christian song for God Only Knows, a duet with King & Country.

Billie Eilish, Lizzo and Lil Nas X have all been handed out early Grammys including Lady Gaga and late rapper Nipsey Hussle who was awarded his first Grammy posthumously.

Eilish, Lil Nas X and Lizzo are up for more awards, which will be handed during the main telecast.

Taylor Swift is missing from action as it was earlier announced that the pop star won't attend the Grammys even though she has three nominations.

On a lighter note, the stars have started pouring in, serving us some fashionable looks on the red carpet. This year's Grammys 2020 has Billie Eilish, Lizzo lead newcomers charge at the music awards. Billie Eilish, who turned 18 in December, is nominated for six Grammys, competing with fellow newcomers R&B artists Lizzo and country rapper Lil Nas X for the top prizes - album, record, song of the year and best new artist.

In a sad start to this year's first music awards, Grammys 2020, news of basketball legend Kobe Bryant's death dulled the mood of celebs as they all mentioned him on the red carpet.

Kobe Bryant, was considered one of basketball's all-time greats, was killed in a helicopter crash in California on Sunday morning, officials said. He was 41.