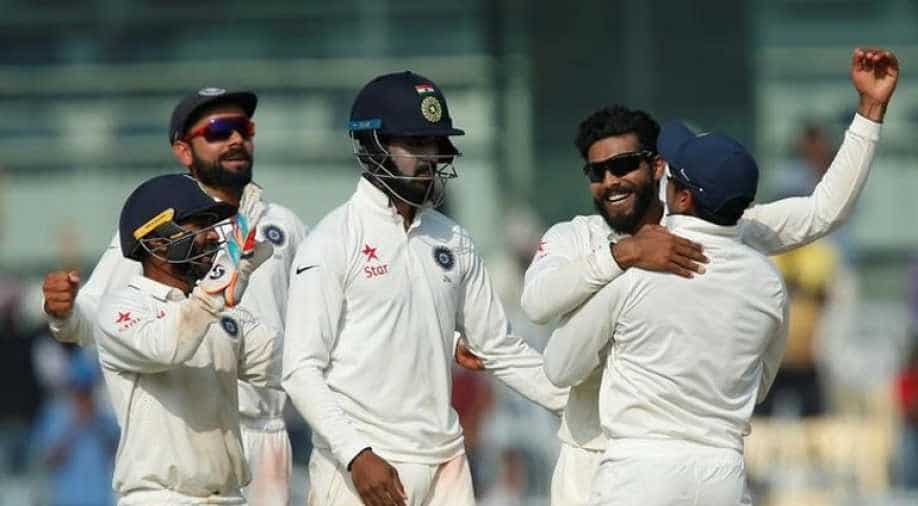 The all-rounder has haunted Cook since the tourists landed in India and he dismissed the England captain for the sixth time in the series by getting him caught at leg slip. Photograph:( Reuters )

Ravindra Jadeja ripped the heart out of England's batting order to bowl India to a thumping innings and 75-run victory in the fifth and final test on Tuesday.

The left-arm spinner claimed seven of the 10 English wickets that tumbled in the final two sessions as India completed an emphatic 4-0 series win.

The touring side needed to bat out the final day to secure a consolation draw and Alastair Cook and Keaton Jennings defended resolutely through the morning to boost their chances.

Cook did look ill at ease against spin and got a life on four when he lunged forward to edge Ravichandran Ashwin but the ball popped out of wicketkeeper Parthiv Patel's gloves.

Jennings played more confidently although was nearly caught by Lokesh Rahul at short leg off Amit Mishra when on 31.

Jadeja returned after lunch to turn the match on its head.

The all-rounder has haunted Cook since the tourists landed in India and he dismissed the England captain for the sixth time in the series by getting him caught at leg slip.

It was a poor shot from Cook who edged a leg-side delivery to Rahul to depart for 49.

Jennings followed up his debut century in the previous test in Mumbai with a fifty but offered a tame return catch to Jadeja after making 54.

For once, England's batting mainstay Joe Root let down his team.

Root was hit on the pad by a fuller delivery from Jadeja and was probably relieved after India's lbw appeal was turned down.

Home captain Virat Kohli took his time before deciding to review the decision, which was overturned after replays suggested the ball would have hit the leg stump.

Jadeja then sprinted backwards to take a brilliant running catch to dismiss Jonny Bairstow off the bowling of paceman Ishant Sharma.

Moeen Ali and Ben Stokes looked determined to bat through but Jadeja removed both batsmen after tea to spark an English collapse.

Moeen was guilty of throwing his wicket away with a loose shot after making 44 and Stokes chipped a catch to mid-wicket to depart for 23.

Jadeja claimed the last two wickets to finish with a career-best 7-48 as England, 103 for no loss at lunch, folded barely half an hour before the scheduled close.