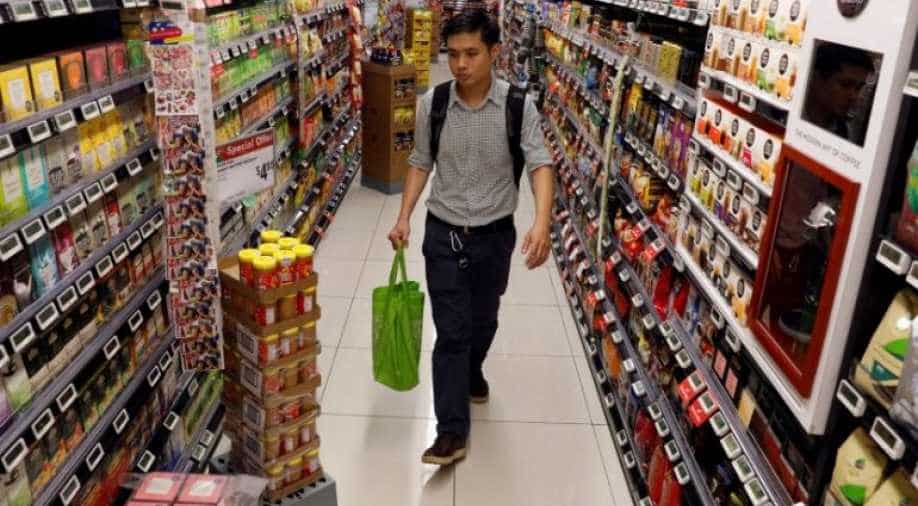 A man shops for groceries at a supermarket in Singapore. Photograph:( Reuters )

The core inflation gauge rose 0.8 per cent from a year earlier, the slowest rate since April 2016, weighed down by declines in utilities and retail prices.

Singapore's core inflation eased to its slowest pace in more than three years in July, data showed on Friday, prompting authorities to downgrade their full-year forecast amid firming bets for monetary policy easing.

The core inflation gauge rose 0.8 per cent from a year earlier, the slowest rate since April 2016, weighed down by declines in utilities and retail prices.

That was lower than a 1.0 per cent forecast in a Reuters poll and a 1.2 per cent increase in the previous month.

Authorities said they expected core inflation - the preferred price gauge of the central bank which is due to meet in October - to be in the lower half of their 1 per cent-2 per cent forecast for 2019, having previously said it would come in the middle.

The 1 per cent-2 per cent forecast range remains in place.

"This is further evidence of the weakened condition of the economy," said Steve Cochrane, chief APAC economist at Moody's Analytics.

"This will likely raise expectations of monetary policy easing... Particularly as many central banks in the region have already begun to ease monetary policy."

The Monetary Authority of Singapore (MAS) said last week, after the city-state slashed its full-year growth forecast, that it was not considering an out-of-cycle policy move.

The Singapore dollar weakened after the data release and was down around 0.2 per cent against the US dollar on the day.

The headline consumer price index in July rose 0.4 per cent year-on-year, matching January's figures, the lowest so far in 2019. The poll had called for a 0.55 per cent rise, compared with a 0.6 per cent increase a month earlier.

Singapore's headline rate is expected to average 0.5 per cent-1.5 per cent for the full year, MAS and Singapore's trade ministry said in a joint statement on Friday.

"An acceleration in inflationary pressures is unlikely against the backdrop of slower GDP growth, uncertainties in the global economy, as well as the continuing restraining effects of MAS' monetary policy tightening in 2018," the authorities said.