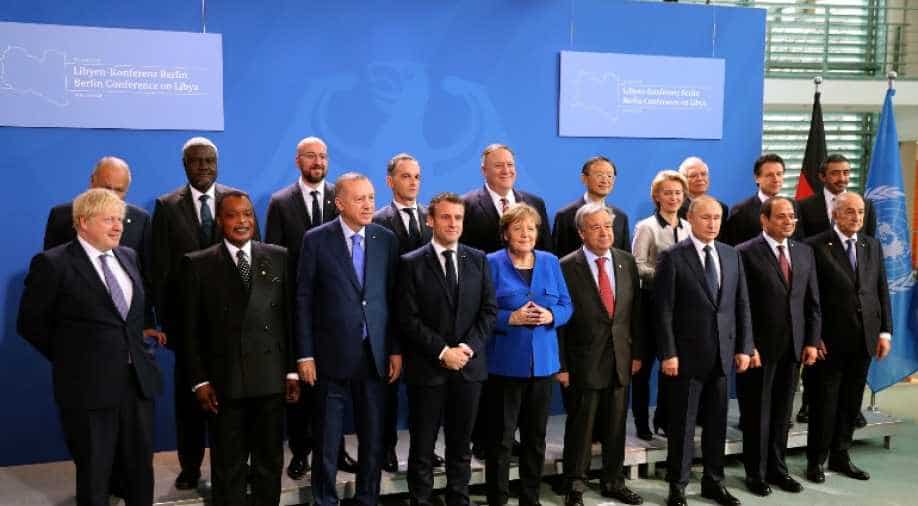 Leaders of both warring factions, strongman Khalifa Haftar and the head of UN-recognised govt Fayez al-Sarraj, were also in Berlin

World leaders were poised to commit to ending all foreign meddling in Libya's war at a Berlin summit Sunday, but calls were growing for an international force to ensure that pledges are put into action.

The presidents of Russia, Turkey and France were among global chiefs at the talks held under the auspices of the United Nations, which wants foreign powers wielding influence in the region to stop interfering in the war -- be it through weapons, troops or financing.

Leaders of both warring factions -- strongman Khalifa Haftar and the head of Tripoli's UN-recognised government Fayez al-Sarraj -- were also in Berlin for the first such gathering since 2018.

But pro-Haftar forces upped the ante on the eve of the talks by blocking oil exports at Libya's key ports, crippling the country's main income source in protest at Turkey's decision to send troops to shore up Sarraj's Tripoli-based Government of National Accord (GNA).

Ahead of the talks, Turkish President Recep Tayyip Erdogan lashed out at Haftar, saying he needed to drop his "hostile attitude" if Libya is to have any chance at winning peace.

The flaring oil crisis underlined the devastating impact of foreign influence in the conflict, in which Sarraj's GNA is backed by Turkey and Qatar while Haftar has the support of Russia, Egypt and the United Arab Emirates.

Voicing his "acute concerns over the arrival of Syrian and foreign fighters in the city of Tripoli", France's President Emmanuel Macron said as the Berlin summit opened that "that must end".

If all goes to plan, all sides will sign up to a plan to refrain from interference, and commit to a truce that leads to a lasting end to hostilities, according to a draft of a final communique seen by AFP.

That document also urges all parties to re-commit to a much-violated UN arms embargo and raises the prospect of intra-Libyan political talks in Geneva at the end of the month.

But with warnings multiplying that pledges are often little respected in reality, calls have grown for international monitors to police the promises.

Libya has been torn by fighting between rival armed factions since a 2011 NATO-backed uprising killed dictator Moamer Kadhafi.

Most recently, Sarraj's troops in Tripoli have been under attack since April from Haftar's forces.

Clashes since April have killed more than 280 civilians and 2,000 fighters and displaced tens of thousands, until a fragile ceasefire backed by both Ankara and Moscow was put in place on January 12.

In the latest apparent ceasefire violation, GNA forces on Sunday accused Haftar's militia of opening fire on them in southern Tripoli.

Sarraj has issued a plea for international "protection troops" if Haftar were to keep up his offensive, echoing a similar call by the EU's chief diplomat Josep Borrell, who stressed that monitors must be present to check that any ceasefire and weapons embargo are respected.

With the idea gathering pace, British Prime Minister Boris Johnson said London would be ready to send "people and experts" to help monitor a Libya ceasefire.

Russia also appeared open to the idea, with President Vladimir Putin's special representative Mikhail Bogdanov saying that the "idea must be discussed on the basis of consensus."

Although Sarraj's government is recognised by the UN, powerful players have broken away to stand behind Haftar -- turning a domestic conflict into what some have described as a proxy war in which international powers jostle to secure their own interests.

Russia has been accused of sending in mercenaries to help Haftar as Moscow seeks to extend its influence in the region, allegations it denies.

For Turkey, the fall of Sarraj's GNA could jeopardise a maritime boundary agreement the parties signed. It gives Ankara extensive rights over the eastern Mediterranean where the recent discovery of undersea gas reserves has triggered a scramble by littoral states.

Erdogan has repeatedly urged Europe to stand united behind Sarraj's government, warning that Tripoli's fall could allow jihadist groups like the Islamic State or Al-Qaeda to regroup.

He has also cautioned that further unrest could prompt a new wave of migrants to head for Europe.