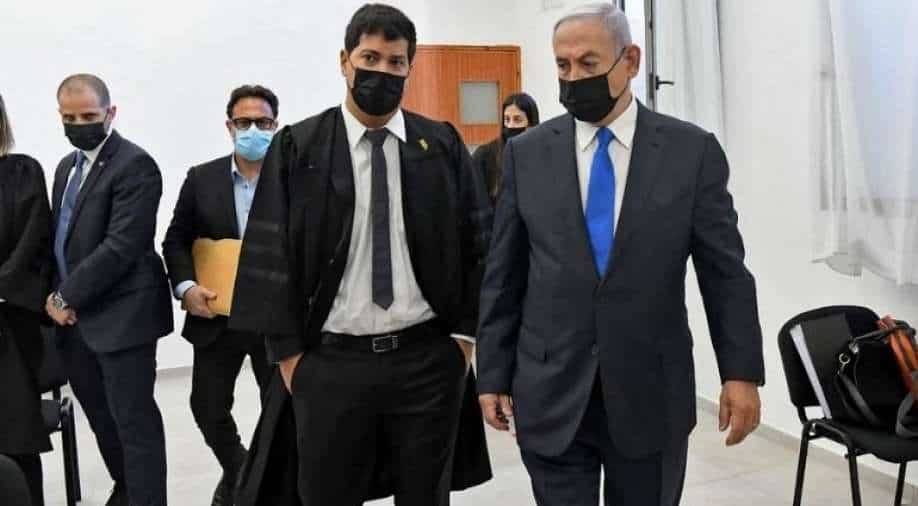 Israel PM Benjamin Netanyahu talks to his lawyer before his hearing for the corruption trial. Photograph:( AFP )

Israel's Prime Minister Benjamin Netanyahu appeared for the trial of the ongoing corruption case against him on Monday, and once again denied all charges.

Netanyahu was charged last year with allegations of corruption as he has been accused of accepting improper gifts and trade regulatory favour with media giants in return for positive coverage.

Through these charges, he has become the first Israeli premier to be indicted in the office. However, Netanyahu has time and again denied all the accusations against him.

The tainted PM made a brief court appearance on Monday, which has been increasing in intensity a few weeks before the fourth national elections within two years.

He was asked to appear in the court to deliver an in-person response to the corruption charges. This has come almost a year after he had formally submitted his innocent plea in writing.

"I confirm the written answer submitted in my name," Netanyahu said before exiting the courtroom in his official motorcade. the 71-year-old prime minister left the courtroom within 20 minutes.

Monday's brief appearance was his final hearing before the prosecution will begin presenting their evidence in the court.

Netanyahu's lawyer, Boaz Ben Zur, on Monday, accused Israel's Attorney General Avichai Mandelblit of mishandling the case and as evidence claimed that several elements of the investigation have been opened without any required authorisations.

Meanwhile, the PM still claims to be a victim of a witch-hunt. Locals have been continuously protesting against Netanyahu and demanding his resignation from the post of the Prime Minister.