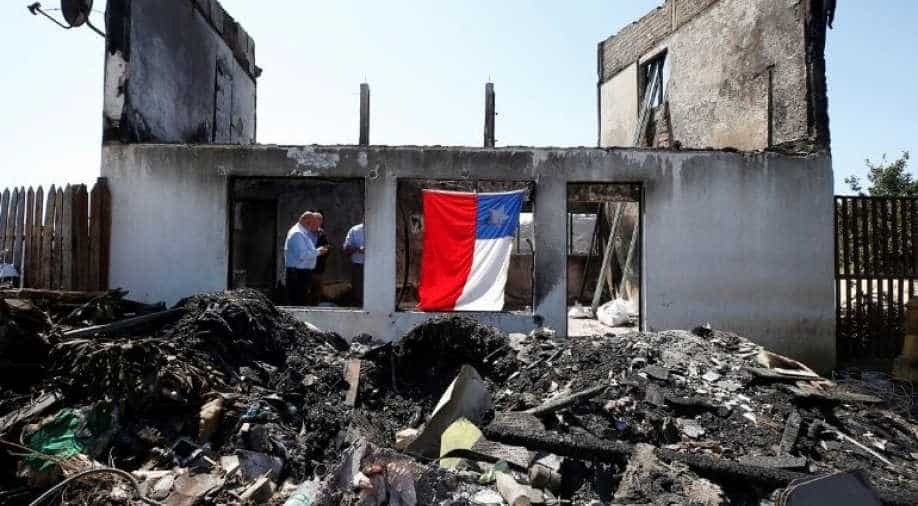 A Chilean flag hangs off the remains of a house, after it was destroyed by fire, following the spread of wildfires in Valparaiso, Chile December 26, 2019. Photograph:( Reuters )

President Sebastian Pinera said on Thursday during a tour of the affected zone that there was evidence the fire had been started deliberately.

More than 245 homes have been destroyed and 700 people left destitute after a forest fire tore through a low-income area of the Chilean seaside city of Valparaiso on Christmas Eve.

President Sebastian Pinera said on Thursday during a tour of the affected zone that there was evidence the fire had been started deliberately.

Valparaiso, known for its colorful wood-frame houses, is popular among tourists in the South American country.

The fire broke out in a forested area on the outskirts of the city and spread toward the coast, hitting the Rocuant and San Roque hills, a jumble of settlements that overlook the city.

Inhabitants fled their homes just moments before sitting down to their Christmas Eve dinner, some losing all their belongings and even pets.

Marta Pinto, 78, said her granddaughter spotted the fire coming down the hill and raised the alarm.

"They took me to the house of a niece because I suffer from lung disease," she told Reuters. "My husband arrived and said: 'Love, we have lost everything.' I´ve cried all my tears already. My heart is so sore for everything that has happened to us, to our neighbors, in this tremendous tragedy."

Juan Silva Suazo, 68, said he had lost his home and all of the possessions he spent 45 years accumulating.

"So many years of sacrifice, it has cost me so much to make my house and now that I´m retired, I have no way of making it back," he said. "I have polio, I cannot stand for a long time, or sit for a long time either as I have osteoporosis in my hips, knees and feet. We are sleeping in a bathroom right now, it´s terrible."

Chile´s forestry commission said the fire was only fully brought under control at midday on Thursday with the help of nine firefighting teams, five helicopters and two water trucks. A total of 132 hectares of vegetation were destroyed, it added.

Agriculture Minister Antonio Walker said the high temperatures at the height of the Southern Hemisphere summer, which runs from December to March, and dry conditions caused by a historic drought currently blighting Chile had provided fertile ground for the fire.

Valparaiso's mayor Jorge Sharp, said on Wednesday he had filed a criminal complaint with the courts against those who started the fire, once they are identified.

"That this fire was intentionally started is, from various indications, clear and we want to know who is responsible and why they would want to cause so much damage to Valparaiso," he said.