Who?s afraid of Gandhi? The politics of statuary in Africa

Gandhi at Tolstoy Farm (1910): The narrative of Gandhian resistance to racism stands challenged in Africa Photograph:( Others )

In April 2015, the statue of Mohandas Karamchand Gandhi in Gandhi Square, Johannesburg was almost covered with white paint by a young protestor before he was arrested. The previous months had seen a sustained agitation at the University of Cape Town for the taking down of the statue of Sir Cecil Rhodes - the imperialist and racist benefactor of the University. The statue came to stand in for a colonialism yet to end. In this attack on pigeon perches all over South Africa, a statue of the Portuguese poet Fernando Pessoa in Durban was covered in red paint; perhaps only because he was white, and not as an indictment of his poetry. There was some irony to the fact that the statue of Gandhi was almost whitewashed, considering the better part of his life was spent in fighting white imperialism.

This month, professors at the University of Ghana called for the removal of the statue of Gandhi that had been unveiled by the President of India in June. All of these instances are reflective of a rethinking happening in Africa of the role of colonialism, anticolonialism and the idea of African identity.

The politics of statuary represents a deeper crisis located in questions of belonging, entitlement and exclusion in postcolonial Africa. In 1986, the Kenyan writer and intellectual Ngugi wa Thiong’o (formerly James Ngugi) wrote his manifesto Decolonising the Mind, arguing for linguistic decolonisation and combating the continuing influence of English as a language and European thought in politically decolonised, but intellectually still-colonised Africa. Thirty years down the line, the same issues have resurfaced; Ngugi, Frantz Fanon, and the South African thinker of black consciousness, Steve Biko are back on the agenda as South Africans and Africans, more generally, ask themselves, what has not changed.

African universities have been ravaged by the attack of neo-liberal thinking and privatisation that have made universities into factories and leeched them off politics. In South Africa, a battle has just been joined. The Feesmustfall movement that commenced in late 2015 challenged both high fees and the exclusion of youth from universities. The movement also protests against a syllabus that is nothing more than a version of courses taught in Euro-American campuses. The universities in Africa are haughtily monolingual in a multilingual landscape and the issue of African knowledge systems is not even considered. We gave up this battle, if it was ever fought, in Indian universities fairly early on, producing generations of academics to service the Euro-American knowledge economy, much as we produced clerks for the British colonial service.

Now, what does all of this have to do with Gandhi and statues of him?

For this, we need another diversion into the histories of Indians in Africa. For over half a millennium, Indian mercantile groups, particularly Gujaratis, have been trading with Africa, preceding the coming of European colonialism. They came to control trade over much of East Africa and this led to tensions with a largely agrarian African populace. As money lenders, petty shopkeepers, and as oceanic traders, the ubiquitous Indian became a metaphor for commerce.

VS Naipaul’s novel A Bend in the River (1979) was an early exploration of the simmering animosity between Indians and Africans, and the protagonist Salim, has to leave the African country where he lives and trades in the face of a rising tide of black nationalism. In South Africa, while the first generation of Indians largely came as indentured labor, many merchants came as passengers on the ships and set up businesses, arousing the ire and racism of local white Europeans.

Under apartheid, Indians built up their own institutions of education and networks of trade, drawing upon historical connections as much as skills derived from hardship.  They also participated in anti-apartheid politics producing leaders, such as Monty Naicker, Amina Cachalia, Yusuf Dadoo and Ahmed Kathrada. Gandhi and his idea of non-violence were an organising principle for the African National Congress, and it allowed for a politics of affinity between black African and Indian. When apartheid ended, a significant majority of Indians were well placed to take up new opportunities, economic and political, aided by affirmative action for those historically disadvantaged under the white Afrikaner rule.

For the majority of black people who have been disadvantaged first under apartheid and then under post-apartheid politics, several factors, such as an economy not in their control, a kleptocracy in power, and institutions weighted against the entry of the poor as well as the perceived success of the Indian community feed into the discourse of Africanness and the outsider. Uganda witnessed the most extreme form of this in 1975 when the dictator Idi Amin expelled Indians from the country.

Gandhi has become an icon of Indian identity and its metaphor all over Africa. Gandhi was invited to come to South Africa in 1893, from his career as a briefless barrister in India, by a wealthy Gujarati merchant to resolve a familial dispute. Once in South Africa, he realised he had landed in the middle of a politics of race that was about making legislative and legal distinctions between Whites and the rest.

Gandhi fought a rearguard action against a slew of legislations that brought together racial discourses of disease and hygiene along with the fear of Asiatic migration into South Africa aimed at the Indian labourers in particular. Gandhi’s strategy was to disaggregate the threat: separating the Indian merchant from the Indian labourer; the Indian from the African; the rich and middle-classes from the poor and indigent; the clean from the dirty; and the civilised from the barbarian.

Gandhi resented the attempts “to degrade the Indian to the position of the Kaffir” and degeneration that would follow. “By persistent ill-treatment they cannot but degenerate, so much so that from their civilized habits they would be degraded to the habits of the aboriginal Natives, and a generation hence, between the progeny of the Indians thus in course of degeneration and the Natives, there will be very little difference in habits, and customs, and thought…a large portion of Her Majesty’s subjects instead of being raised in the scale of civilisation, will be actually lowered.” Gandhi presented the effort of the Indians in South Africa, as a manly “struggle against a degradation sought to be inflicted upon us by the Europeans, who desire to degrade us to the level of the raw Kaffir whose occupation is hunting, and whose sole ambition is to collect a certain number of cattle to buy a wife with and then, pass his life in indolence and nakedness.”

When university professors ask for the removal of Gandhi’s statue, they draw upon these multiple histories. Gandhi is a metaphor for the Indian presence in Africa and histories of both Indian racism as well as commercial wealth. The idea that decolonisation as yet has not been achieved targets both questions of western knowledge as much as perceived Indian economic success. It also represents an elite discourse that deflects the ills of the nation-state and postcolonial corruption on to the “outsider” and “foreigner”. To paraphrase Samuel Johnson, xenophobia is the last refuge of the postcolonial scoundrel.

Gandhi in South Africa certainly played the politics of race but his life was one of an unremitting engagement with the meanings of inclusion and exclusion. The irony is that, while Gandhi becomes increasingly sidelined in the maelstrom of Indian politics, in Africa he has come to stand in for the Indian presence. 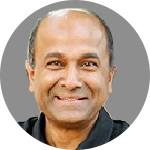