'When will you die?' Hong Kong leader Carrie Lam grilled at press conference 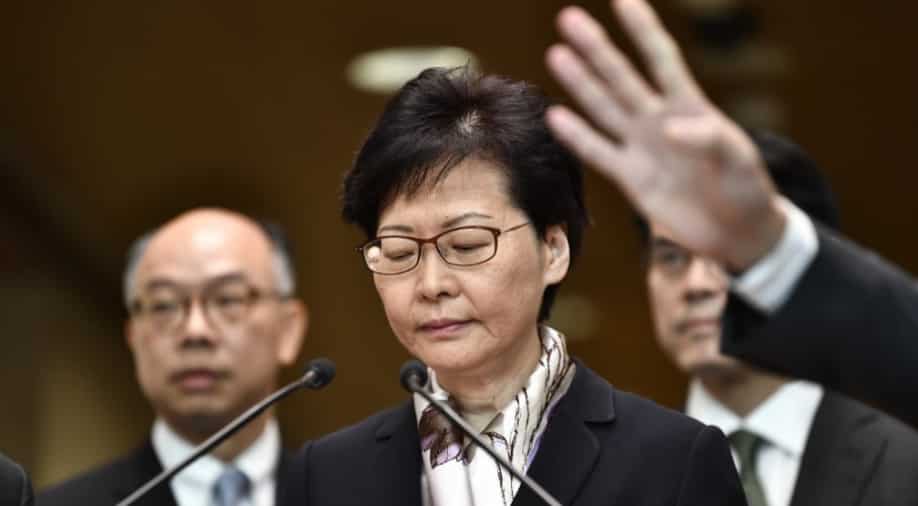 "You blame your own political misjudgement on others, and refuse to acknowledge your mistakes,' one journalist said.

When Hong Kong's leader Carrie Lam appeared before the press on Tuesday, she appeared to be expecting to deliver a brief statement and move on. Instead, she faced a media onslaught.

No sooner were her prepared remarks finished than the full-frontal assault -- in both Cantonese and English -- began.

"You blame your own political misjudgement on others, and refuse to acknowledge your mistakes," one journalist said.

"When will you accept political responsibility to end citizens' fear?... When will you be willing to step down? When will you tell the police to stop?," the reporter from Hong Kong's public broadcaster RTHK asked.

Before Lam could respond, the reporter added an admonition: "You asked me in the past to take my job seriously, so please answer me seriously as well."

The embattled Beijing-backed leader began to reply but more questions were shouted.

"Citizens are afraid of you and the police, can you answer the question?"

The combative press conference was an indication of the rising tensions in the city after a weekend of violence that left dozens of people with injuries, some of them serious.

Under the "One country, two systems" principle, the media in Hong Kong enjoys freedoms unheard of in mainland China. A broad spectrum of political leanings are represented, from fiesty independent elements to strongly pro-Beijing outlets.

Lam at times appeared caught off-guard by the intensity of the questioning, with reporters repeatedly interrupting her and accusing her of failing to respond.

At one point she paused, looked down, and then looked up again at reporters with her eyebrows raised as they continued to fire questions at her.

At other moments, she sipped from a glass of water as the barrage of questions continued.

In her opening remarks, she called for calm.

"I again ask everyone to put aside your differences and calm down," Lam said, who appeared to be on the verge of tears at one point.

"Take a minute to think, look at our city, our home, do you all really want to see it pushed into an abyss?"

Lam defended the police against accusations of excessive force over the weekend, when rounds of tear gas were fired into subway stations and on crowded shopping streets.

She said she was "heartbroken" by reports of serious injuries, but offered no concessions to the demonstrators and insisted that police were facing "extremely difficult circumstances".

"This question has been answered," she repeated as she was pressed on whether Beijing would allow her to fully withdraw a now-suspended bill allowing extradition to the mainland -- a key protester demand.

And the barrage continued as she abruptly left the podium: "Do you have a conscience?" shouted one journalist.

"Mrs Lam, many citizens have been asking recently when you will die," yelled another.