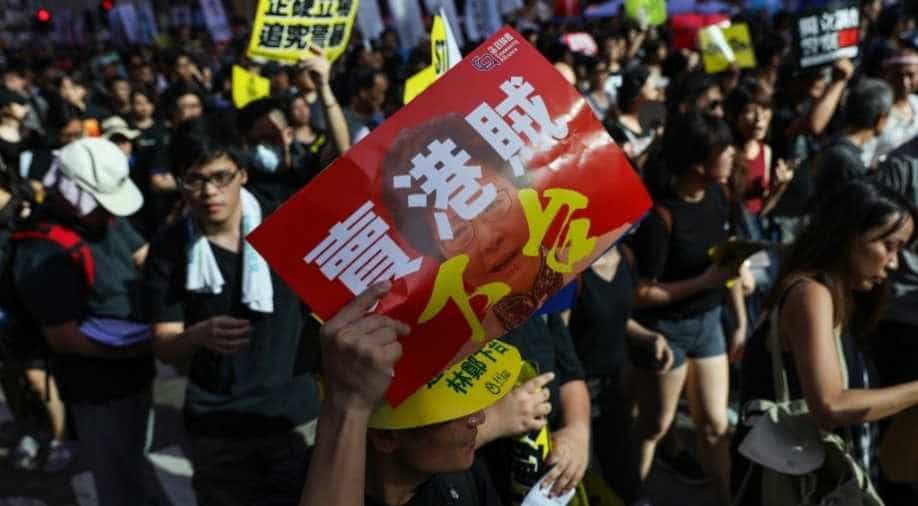 Carrie Lam's comments come after China said the anti-government protests that have swept the city over the past two months had begun to show "sprouts of terrorism".

Hong Kong leader Carrie Lam said on Tuesday that "lawbreaking activities in the name of freedom" were damaging the rule of law and that the Asian financial hub's recovery from anti-government protests could take a long time. While speaking in a press conference, Lam also defended the city's police after a weekend of violent protests confrontations between them and protesters.

"Violence, no matter if it's using violence or condoning violence, will push Hong Kong down a path of no return, will plunge Hong Kong society into a very worrying and dangerous situation," Lam said during a press conference.

"The situation in Hong Kong in the past week has made me very worried that we have reached this dangerous situation," she added.

She said police faced "extremely difficult circumstances" and were bound by "rigid and stringent guidelines on the appropriate use of force".

During the press conference, Lam faced combative questioning from reporters. She also tried to didged a question on whether she had the autonomy to fully withdraw the now-suspended extradition bill without Beijing's approval and to grant

Pressed on whether her hands were tied by Beijing on the issue, she demurred, insisting the question had been answered in the past.

"I again ask everyone to put aside your differences and calm down."

"Take a minute to think, look at our city, our home, do you all really want to see it pushed into an abyss?" Lam added, appearing on the verge of tears.

Her comments come after China said the anti-government protests that have swept the city over the past two months had begun to show "sprouts of terrorism".

Over the weekend, thousands of pro-democracy protesters defied warnings from authorities to hit the streets for the 10th weekend in a row during which the demonstrator threw petrol bombs at police officers.

Meanwhile, Hong Kong police on Monday admitted to using undercover officers "disguised" as protestors during the pro-democracy protests over the weekend.

"I can say that during the time when our police officers were disguised, firstly they would not provoke anything, Deputy Commissioner of Police, Tang Ping-Keung said in a press conference.

The two-month crisis, which was triggered by opposition to a planned extradition law, has morphed into a wider movement for democratic reform and a halt to eroding freedoms.

It is the biggest threat to Beijing's rule of the semi-autonomous southern Chinese city since its handover from Britain in 1997 -- and has drawn repeated criticism but no forceful actions yet from the central Chinese government.