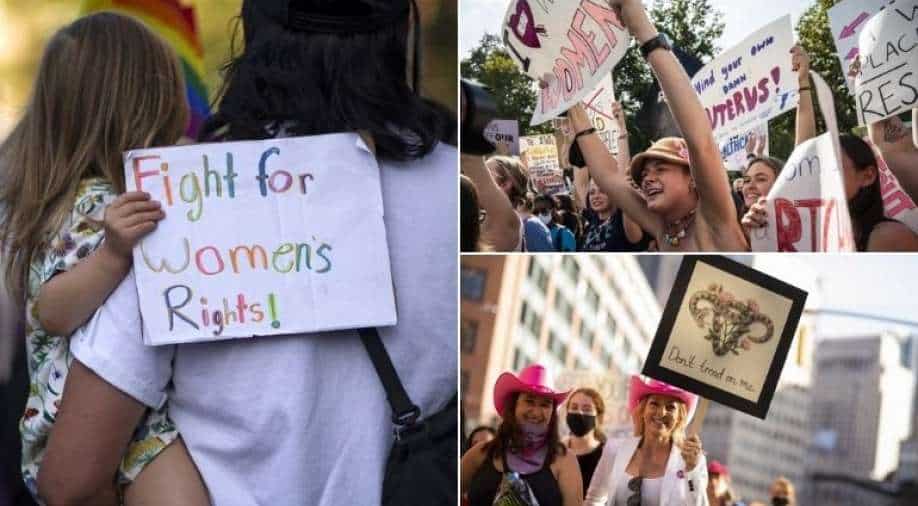 The women most affected in states with bans would be those who can’t easily travel. They are disproportionately poor, Black, Latina, teenagers, uninsured and immigrants in the country illegally Photograph:( AFP )

For women in Democratic states and women elsewhere who have the means to travel to a clinic, abortion would still be accessible. For poor women in many Republican states, travelling to other states for in-clinic abortions could be prohibitively challenging

Last week’s Supreme Court arguments on a Mississippi abortion law raised the prospect of a return to a time half a century ago — when the procedure was illegal across most of the United States, and women, perilously, tried to end pregnancies on their own or sought back-alley abortions.

If the court decides to reverse or weaken the landmark Roe v. Wade ruling, it will usher in a somewhat different era. Abortion would remain legal in more than half of the states, but not in a wide swath of the Midwest and the South.

Legislatures in 22 states would almost certainly move to ban or substantially restrict access to abortion. Some women would be able to travel out of state for the procedure. Others would have access to pills, in some cases illicit, which now offer a relatively safe and difficult-to-police home alternative to clinics.

Many women, disproportionately those who are poor, would unwillingly carry their babies to term and rely on a social safety net that is thinner than in most other rich nations and thinner in some states than in others.

In effect, the United States without Roe would look very different for different people. For women in Democratic states and women elsewhere who have the means to travel to a clinic, abortion would still be accessible. For poor women in many Republican states, travelling to other states for in-clinic abortions could be prohibitively challenging.

Without Roe, the number of legal abortions in the country would fall by at least 14 per cent, according to research by a team from Middlebury College; the University of California, San Francisco; and the Guttmacher Institute, based on the effects of clinic closures in Texas between 2013 and 2016.

That result would be the culmination of a decades-long effort by the anti-abortion movement. “That would create a culture where we would be able to enact policies and legislation to support the women and children in our state,” said Laura Knight, president of Pro-Life Mississippi.

Roughly half of women who are unable to access a legal abortion would probably instead bear children, other research from Texas suggests. The rest would find another way to end their pregnancy, like crossing state borders.

In some ways, a post-Roe America would mirror the pre-Roe one. Then, abortion was generally legal in four states, and 13 more allowed abortion for health reasons. Women who could afford it, would travel out of state to seek the procedure. But many women turned to coat hangers, chemicals, unskilled abortion providers and other dangerous methods. In the early 1960s, Cook County Hospital in Chicago was treating more than 4,000 women a year for life-threatening effects of botched illegal abortions.

Now, there are safer options. In contrast with the 1960s, the internet has made it easier for women to learn where they can find a legal abortion or order black-market pills that can safely and effectively end pregnancy up to 10 weeks. Already, many American women order such pills online or cross the border to Mexico, where they are sold over the counter as ulcer medicine. Aid Access, a group that connects women with European doctors and pills from India, will work with women in all 50 states.

It is technically illegal to sell prescription medicine to American patients from another country without a prescription from a doctor licensed in the United States, but enforcement is difficult. Some states are already adding restrictions: On Thursday, a law went into effect in Texas banning medication abortion after seven weeks; it makes it illegal to provide the pills, not to take them.

“We are going to see some women will still do dangerous things like having the boyfriend hit them in the belly or throwing themselves down stairs or taking dangerous herbs,” said Carole Joffe, a professor at the UCSF Bixby Center for Global Reproductive Health, who has studied the history of abortion in the United States. “But there is now a very safe extralegal option.”

Currently, there is at least one abortion clinic in every state, and most women live within an hour’s drive of one. But without Roe’s protections, clinics in 22 states would shut down as abortion would be banned immediately or in relatively short order, according to an analysis of state laws from the Center for Reproductive Rights, which litigates abortion cases. The 22 states represent 42 per cent of American women of childbearing age.

Leaving abortion law to state legislatures has been a goal of the anti-abortion movement, though some would prefer to go further, establishing a national policy that would end abortion throughout the United States. Such a goal cannot be achieved simply by overturning Roe. It would require federal action — or a different Supreme Court ruling that grants constitutional rights to fetuses.

The Supreme Court, which is expected to rule in June, may refrain from overturning Roe or may craft a compromise in which abortions early in pregnancy remain protected. But many legal experts who watched the oral arguments say it is likely that Roe will be substantially weakened. 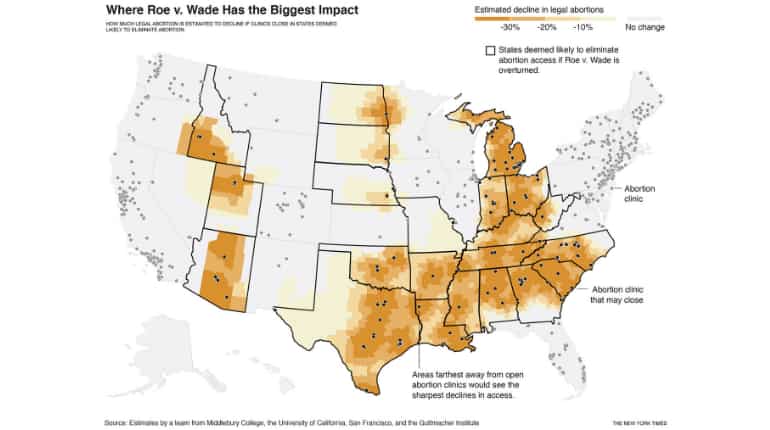 If the Supreme Court decides to reverse or weaken the landmark Roe v. Wade ruling, legal abortions would fall, particularly among poor women in the South and Midwest, researchers say.

The women most affected in states with bans would be those who can’t easily travel. They are disproportionately poor, Black, Latina, teenagers, uninsured and immigrants in the country illegally.

“Those most vulnerable will be left behind and be forced to carry pregnancies that they were not prepared for,” said Tammi Kromenaker, director of the Red River Women’s Clinic, the only abortion provider in North Dakota, which has a trigger law that would make abortion illegal without Roe.

As some states have tightened abortion restrictions in recent years, more organizations have helped women book and pay for flights or gas, hotels and child care. But their leaders say they do not have the capacity, in money or staff, to help the number of women who would need it in the South and Midwest if Roe fell.

One of these groups, Fund Texas Choice, received about 35 calls a month before Texas banned most abortions in September and was able to help nearly everyone who called. Since then, it has had up to 300 callers a month and has had to turn away half, said Anna Rupani, the group’s executive director. Seventy per cent of its clients are people of colour, and 60 per cent are parents.

“It will be absolutely unsustainable if Roe is overturned,” she said.

Many of the states that would ban abortion also have the least social support for women and children, like robust access to family planning services or paid family leave, and have high levels of child poverty. Studies have found that being denied an abortion has economic effects that last years.

Some who oppose abortion say the next step is to create more of a safety net for poor mothers. “There has never been enough alternative help for women,” said Chuck Donovan, who has worked in the anti-abortion movement for decades, now as president of the Charlotte Lozier Institute. “It’s something pro-lifers could agree to, even if it frustrates spending conservatives.”

He mentioned pregnancy centres; assistance for mothers to find employment and afford things like diapers and car seats; an expansion of Medicaid to cover women for a longer period postpartum; and efforts to collect child support from fathers.

Legislation under consideration by Democrats in the Senate would help expand support for mothers and children, including extending child tax credits, expanding Medicaid and establishing federal funding for child care and pre-K.

Over the last three decades, roughly six in 10 Americans on average have opposed the overturning of Roe, and around eight in 10 have said abortion should be legal in at least some circumstances, according to Gallup. But most Republican voters would support overturning Roe.

In some parts of the country, a post-Roe world is easier to envision because it has, in many ways, already arrived. In four states — Missouri, Mississippi, North Dakota and South Dakota — there is only one clinic.

In Texas, a law that went into effect in September prohibits abortion after the fetal cardiac activity is detected, which is around six weeks of pregnancy. In September, legal abortions in the state plummeted by half, according to research from the Texas Policy Evaluation Project at the University of Texas at Austin. With the aid of groups offering grants and travel assistance, some women were able to seek care in neighbouring states. But others could not make the trip. And nearby clinics became overburdened by the surge in patients, pushing some women too far into their pregnancies to seek care there.

Over time, some clinics will adjust, by either locating near state borders or expanding their capacity to accommodate new patients. Already, the Hill Top Women’s Reproductive Clinic, which was the only abortion clinic in El Paso, closed this year. It reopened just over the border from El Paso, in Santa Teresa, New Mexico.