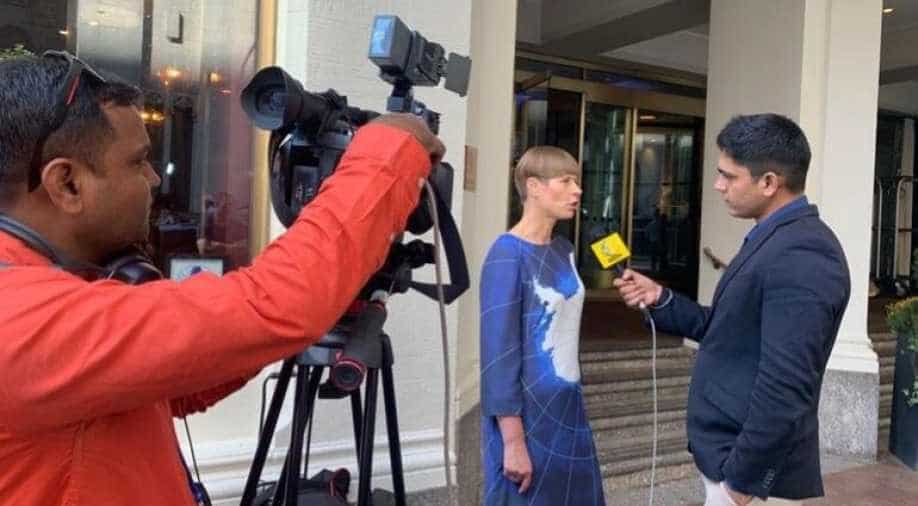 A country as big as India can have a huge role in the world, says Estonian President.

Estonia, one of the world's most digitised countries, is keen to increase its cyber profile and to provide services globally in tandem with India. While speaking to our principal diplomatic correspondent Sidhant Sibal in New York, Estonia's President Kersti Kaljulaid talked about a number of issues ranging from cyber concerns to climate change.

Read the full transcript below.

WION: How was your meeting with PM Modi?

Kersti Kaljulaid: We did a follow up to the visit of your Vice-President. We discussed how we can exchange business delegation and I invited PM Modi to Estonia. But a major part of discussion was on digital economy because Estonia has a digital governance system and 99 per cent government services run digitally. Your Prime Minister was deeply interested in how we guard the system, how we manage it legally, and how we increase the security and trust of people.

WION: How can you help India with digital infrastructure?

Kersti Kaljulaid: We can demonstrate what works. For example, do not build your system like a train, like you enter the first wagon and to reach various services you have to work through all. Create it like the sun, at the centre there is a nucleus, and all the rays radiate so you can directly connect point to point. Do not create huge databases at one place, make sure that they are dispersed to protect them. Also create a legal space, so that civil servants cannot go into the system without serious penalties. In Estonia, it's a criminal offence to do so and [based on] these elements, in 20 years we have created the environment.

WION: What are the key things that you forward from India?

Kersti Kaljulaid: Estonia is a big exporter of digital government services in gulf countries, we have developed quite a big market, we are active in Africa, leveraging in the EU, and U.N. development money. We have experience in exporting how to get your country online. We can do both services globally. We are the fourth biggest exporter globally of wooden houses [which are] environmentally friendly, since we are celebrating the first Climate Summit of UN this week. CO2, gathered in the wood stays in the houses for centuries. They are climate positive elements to become climate neutral globally.

WION: What is your view of India and its role in the world?

Kersti Kaljulaid: A country as big as India can have a huge role in the world, thinking about your software industry, you have built your globally economy on the export of services. I am sure, when the job market is getting geographically neutral, people can work everywhere without even leaving home. That can have a huge impact in the world.

WION: How do you see the issue of terror?

Kersti Kaljulaid: Estonia participates with its partner allies in many missions and also globally in Afghanistan and Iraq. In Mali, together with the French we are on a bilateral mission to make sure that terror is not spreading and is contained, and hopefully not happening anywhere. We are in collation with like-minded countries to fight terrorism.

WION: One solution to climate change?

Kersti Kaljulaid: If you want one solution, all that you need to know is - find an empty space which is the size of Spain, and cover it with solar cells and connect it with the global grid, but in reality, I don't think this will happen. Our world is too fragmented for that. Instead, there will be development of big solar power producers and long transfer lines from south to north to make sure solar can reach big networks, then there will be the wind which will be used up north, then there will be big grids which will be well connected.

WION: How has your experience been as a female head of state?

Kersti Kaljulaid: Once in the room you feel welcomed. But quite often, me and my other colleagues are pushed aside by security and other people if they don't notice we are heads of states. Our security, people have to work harder for others to understand that these women can be heads of states, particularly if they come from smaller countries and if they are younger, we just don't fit in. We must change it.

WION: India removed the special status for Jammu and Kashmir. Your reaction?

Kersti Kaljulaid: I cannot say that I am expert in this matter, all I can say is that Estonia always respects international law and positions itself on the decision taken here by the U.N.