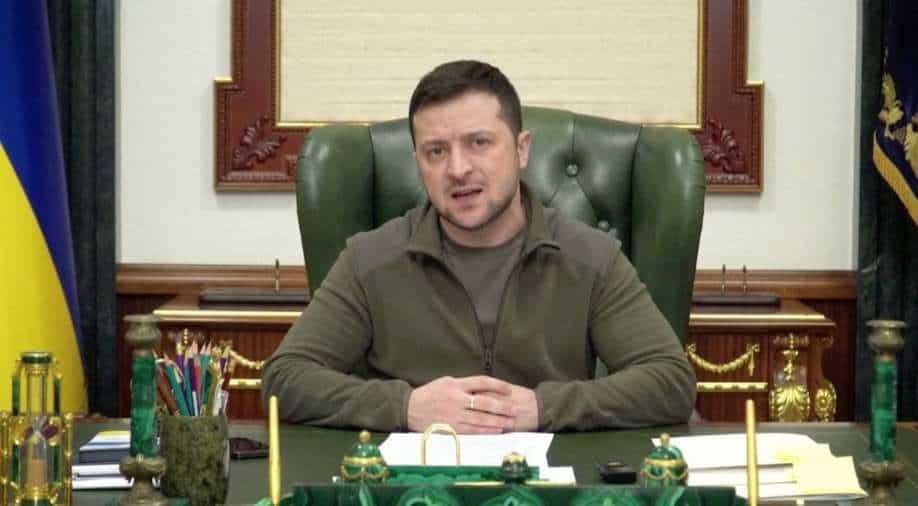 Zelenskyy, a former comedian who ran a populist campaign to become president in 2019, is no stranger to performing, and his social-media missives and speeches have transformed him into a global symbol of his country’s resistance to Russian aggression

He told U.S. lawmakers that he had a dream, invoking the Rev. Martin Luther King Jr. to describe Ukraine’s fight against the Russian invasion. He said to the British Parliament that his country would fight until the end, in forests and fields, a vow resonant of Winston Churchill’s exhortations against Nazism. To members of the German Parliament he spoke of a new wall dividing Europe, echoing the Berlin Wall of the Cold War.

The passionate speeches, delivered remotely by Ukrainian President Volodymyr Zelenskyy in his now-ubiquitous military-issue shirt, are part of a vigorous rhetorical effort to rally international support — for arms, or aid to his country, or sanctions against Russia.

Zelenskyy, a former comedian who ran a populist campaign to become president in 2019, is no stranger to performing, and his social-media missives and speeches have transformed him into a global symbol of his country’s resistance to Russian aggression.

The allusions, metaphors and allegories made by Zelenskyy point to a tailored strategy to emotionally appeal to nations and institutions and their histories.

“The goal is, of course, to get his audience on board,” said Henriette van der Blom, an associate professor of ancient history at the University of Birmingham in England who has directed a project examining the writing of political speeches in Britain. “This is a very ancient rhetorical trick.”

Speeches can change the course of history, she added.

Zelenskyy’s soaring appeal to Congress, which prompted a standing ovation, framed Ukraine’s fight against Russia as a battle to preserve democracy, freedom and the rule of law, calling on the United States’ image of itself as a leader of the free world to defend those values.

Russia’s attack, Zelenskyy said, was a brutal offensive “against our freedom, against our right to live freely in our own country, choosing our own future, against our desire for happiness, against our national dreams — just like the same dreams you have, you Americans.”

He implored lawmakers to remember two moments of American trauma that involved assaults from the sky to empathize with Ukrainians fleeing missiles: Pearl Harbor and the terror attacks of Sept. 11, 2001.

He evoked King to request antimissile defense systems, aircraft and a “no-fly” zone above Ukraine, a step that NATO allies have rebuffed, fearing it would escalate the war with Russia.

“I can say I have a need. I need to protect our sky. I need your decision, your help, which means exactly the same, the same you feel when you hear the words, ‘I have a dream.’” Zelenskyy said.

“He’s trying to address the conscience of his audience,” said van der Blom. “That’s part of this idea of pulling on easily identifiable themes for that particular audience.”

Zelenskyy capped the speech with a direct appeal to President Joe Biden, tailoring his words to appeal to the United States’ role on the global stage.

To Britain: ‘We will fight till the end’

British lawmakers earlier this month invited the Ukrainian leader for the first ever speech in the House of Commons by a foreign leader. He took advantage of the address to quote Shakespeare and align himself and his cause with Churchill, Britain’s leader during World World II.

Ukrainians needed to defend their country against the Russians, just as Britons did against Nazism, Zelenskyy said. He vowed his country would never surrender to Russian tanks.

“We will fight till the end, at sea, in the air,” Zelenskyy said in front of the Ukrainian flag, echoing the phrasing of Churchill in a famous wartime speech: “We will fight in the forests, in the fields, on the shores, in the streets.”

His words immediately brought to mind an image of Churchill speaking in the House of Commons, said van der Blom. “This is what he’s trying to make us think.”

And his choice to at one point address Prime Minister Boris Johnson of Britain by his first name did not go unnoticed, she said. “Is it to give a signal that they are very close and making Johnson feel like he needs to work harder?”

Germany: ‘Tear down the wall!’

In his address to the Bundestag last week, Zelenskyy urged Germany to take stronger action against Russia, casting the decision as a metaphorical division between building or demolishing a wall — harkening back to the Cold War, an emotional period for Germans.

“You are like behind the wall again. Not the Berlin Wall but in the middle of Europe, between freedom and slavery,” he said. “And this wall grows stronger with each bomb that falls on our land, on Ukraine,” he said.

He called for an embargo on trade with Russia, saying that its ability to keep trading, and keeping Ukraine from joining the European Union, was helping Moscow fortify this metaphorical wall.

He addressed Chancellor Olaf Scholz of Germany with an emotional appeal, casting it as a judgment on the leader’s legacy. “Tear down this wall. Give Germany the leadership you deserve, and what your descendants will be proud of.”

Canada: ‘Imagine that you hear it, your children hear it’

With Canada, Zelenskyy mixed a personal, first-name appeal to Prime Minister Justin Trudeau, with apocalyptic images of a Canada at war.

In his address to Canadian lawmakers, Zelenskyy referred to the country’s leader simply as “Justin.” And to help them understand Ukraine’s experience, he said, he painted a vivid image of Canadian cities and landmarks under attack.

“Imagine that at four in the morning each of you hears explosions, terrible explosions,” he said. “Justin, imagine that you hear it, and your children hear it, hear missile strikes at Ottawa airport.” He added: “Imagine you are looking for words to explain this to children. Explain to them that a large-scale war has begun.”

He asked lawmakers to envision Canadian flags replaced by Russian ones, Toronto’s CN tower being destroyed by Russian missiles and schools being burned down.

“This is our reality,” he said.

He thanked Canada for its support, but said that what he really wanted was for the country to help bring about a no-fly zone in the skies above Ukraine and to force more companies to leave the Russian market.

Israel: ‘The threat is the same’

Zelenskyy, who is Jewish, began an address to the Knesset on Sunday by sharing a quote from a former Israeli prime minister, Golda Meir, who was born in Kyiv: “We intend to remain alive. Our neighbors want to see us dead. This is not a question that leaves much room for compromise.”

In a virtual address to lawmakers, Zelenskyy sought to highlight the ties between Ukraine and Israel and said that the suffering of Ukrainians paralleled that of Jewish people during the Holocaust.

Although decades apart, the date of Ukraine’s invasion and the founding of the Nazi party in Germany was the same, he said: Feb. 24. And he likened Moscow’s discussion of “the Ukrainian issue” to the “final solution,” a euphemism used by the Nazi bureaucracy in detailing their plans for the genocide of Jews in Europe.

But he also criticized Israel for not providing Ukraine with weapons, imposing strong enough sanctions against Russia or putting sufficient pressure on Russian businesses.

“Premeditation is often erroneous. And mediation can be between states, not between good and evil,” he said.

Some Israeli lawmakers criticized the comparison of the war in Ukraine to the Holocaust, calling it insensitive and unnecessary to juxtapose the tragedies.

May Golan, a member of the opposition Likud party, said she was left with “a very bitter taste” after Zelenskyy’s speech. Though she was not indifferent to the situation, she said there was a line: “There is no justification to compare this with the Holocaust and use the expression ‘the final solution.’”