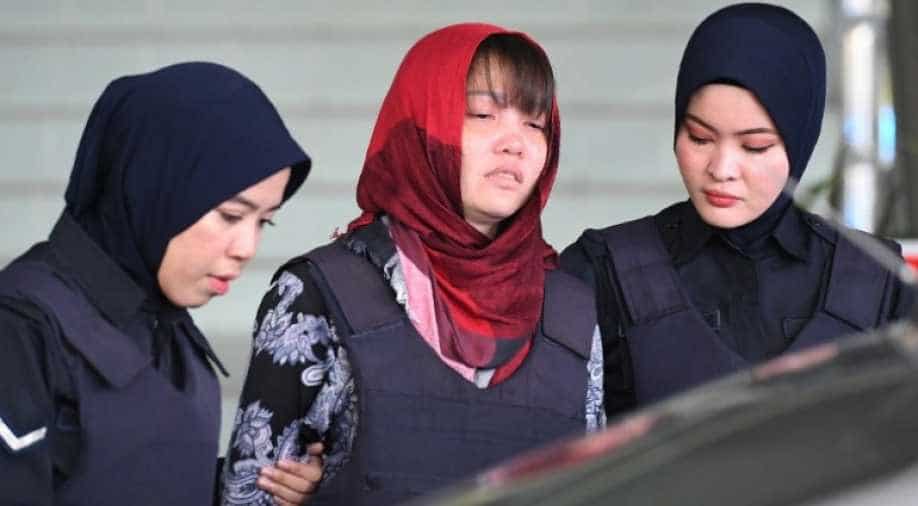 Doan Thi Huong smiled and said 'I'm happy' after prosecutors presented her legal team with the new charge in a Malaysian court and they announced the details.

A Vietnamese woman suspected of assassinating the North Korean leader's half-brother accepted a lesser charge Monday and looks set to be freed soon, after her Indonesian co-accused was released last month.

Doan Thi Huong smiled and said "I'm happy" after prosecutors presented her legal team with the new charge in a Malaysian court and they announced the details.

She has been on trial since 2017 for the murder of Kim Jong Nam at Kuala Lumpur airport with a toxic nerve agent in a Cold War-style hit.

It came after authorities last month rejected her initial request for her murder charge to be dropped entirely -- a shock decision after the attorney-general agreed to withdraw the charge against her Indonesian co-defendant, Siti Aisyah, and she walked free.

Salim Bashir, one of her lawyers, told reporters outside the High Court in Shah Alam, outside Kuala Lumpur, that the 30-year-old had been offered a charge of causing hurt by dangerous weapons instead of murder.

Soon afterwards, the new charge was read in court to Huong and she pleaded guilty. The charge carries a maximum 10-year jail term but the lawyer said she would likely receive a shorter sentence.

It is "very likely she could walk out free today", he said.

Both women had always denied murder, saying they were tricked by North Korean spies into carrying out the assassination that shocked the world using a highly toxic nerve agent, and believed it was a prank for a reality TV show.

Their lawyers presented them as scapegoats and said the real masterminds were four North Koreans accused alongside them, but who fled Malaysia shortly after the assassination.

If released, it will mean that no one is facing murder charges for the killing in February 2017 of Kim Jong Un's estranged relative, who was once considered heir apparent to the North Korean leadership until he fell out of favour.

South Korea accuses the North of ordering the hit, a claim vehemently denied by Pyongyang.

There were dramatic scenes in court when Huong's initial bid for immediate release was rejected -- she sobbed in the dock and had to be helped out of court by two police officers.

Vietnam reacted angrily to the decision, which came just days after the Indonesian defendant was released, and started stepping up pressure on Malaysia to free Huong.

A murder conviction carries a mandatory penalty of death by hanging in Malaysia. The government vowed last year to scrap capital punishment but recently indicated that it might backtrack.