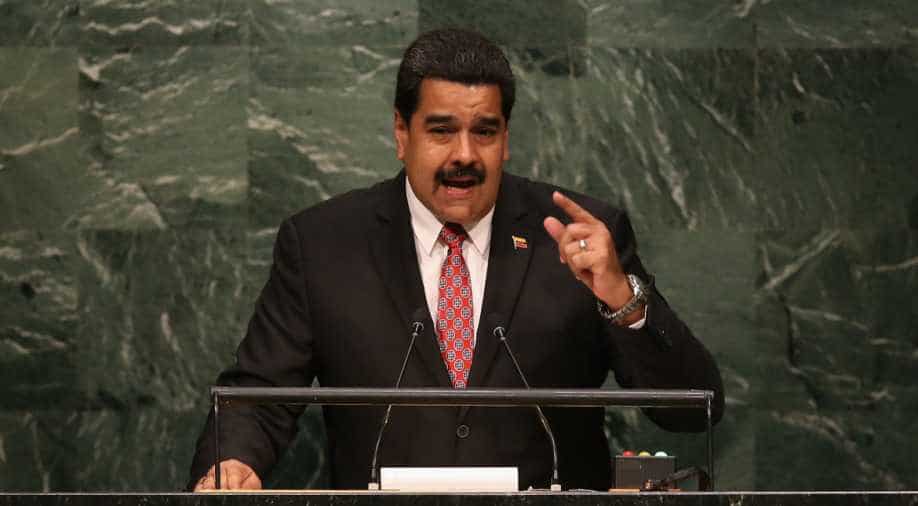 The Opposition says Maduro's economic management is to blame for the crisis in the country while Maduro himself blames the crisis on an 'economic war' by his capitalist rivals. Photograph:( Getty )

Follow Us
Opposition leaders in Venezuela said on Friday they have finished authenticating signatures on a petition to recall President Nicolas Maduro, and have met the threshold needed for a referendum on removing him from office.

"The number of signatures has clearly exceeded the minimum needed," said Vicente Bello, coordinator for the referendum effort.

Government election authorities now have 20 days to review and affirm that finding.

Opponents of the regime finished giving their fingerprints to electoral authorities earlier on Friday, wrapping up a key stage in their drive for a referendum to remove him.

Already used to queuing for hours to buy food in an economic crisis, this week they lined up at electoral offices for a somewhat frustrating process.

Officials took their electronic fingerprints to authenticate signatures on a petition calling for a recall referendum. That is just one stage in a months-long bureaucratic procedure.

One voter in the northern city of Maracay, civil servant Felix Rodriguez, skipped work to come and give his signature.

He has no flour, milk or meat in his kitchen. His old truck is broken down and there are no spare parts available.

"Prices are going up every day, on top of the shortages," he said. "Whether you have money or not, you've got problems."

In Maracay the electoral office opened late, due to electricity cuts.

The queue stretched for several blocks in the 30-degree Celsius heat. Rodriguez had to rush back to the office.

"I took a risk by leaving work," he explained. In the end, he said angrily, "I won't be able to validate my signature."


1.3 million signatures
Friday was the fifth and last day of the fingerprinting process, which could make or break the bid to hold a recall vote on Maduro.

The opposition MUD coalition has accused the government of sabotaging the process through delays, obstacles and veiled threats to suspend the process.

Of the 1.3 million signatures recorded by the electoral board in the initial petition, at least 200,000 must be authenticated to pass to the next phase, with a minimum amount required in every state.

Opposition lawmaker Delsa Solorzano said 326,000 fingerprints have already been submitted overall. These have yet to be validated by the National Electoral Council (CNE).

The next step will require the collection of four million more signatures to call a full referendum.

After that date, a successful recall vote would simply pass power to Maduro's hand-picked vice president.

Maduro vowed there will be no referendum this year.

"If there is one, we will go and win it. If there isn't, political life in this country will go on," he said.


'Economic war'
Venezuela is grappling with an economic crisis sparked by the plunge in prices for its crucial oil exports.

People face shortages of basic foods and goods as well as electricity blackouts.

The opposition says Maduro's economic management is to blame. They denounce the jailing of his political opponents.

Senior opposition leader Henrique Capriles was on the northern island of Margarita, where final decisive results of the fingerprint count were being keenly awaited on Friday.

"With this great conclusion we will teach them a lesson," he said of the government.

Maduro blames the crisis on an "economic war" by his capitalist rivals.

He has alleged irregularities in the signature process and challenged the referendum bid in the courts.

Waiting in line at a supermarket in Caracas, Ramon Bernay, a retired economist of 64, said he stood by Maduro in spite of the country's problems.

"I wait in line every day and the situation is annoying," he said.

"But I hold out, because the cause of it is an economic war by the bourgeoisie."