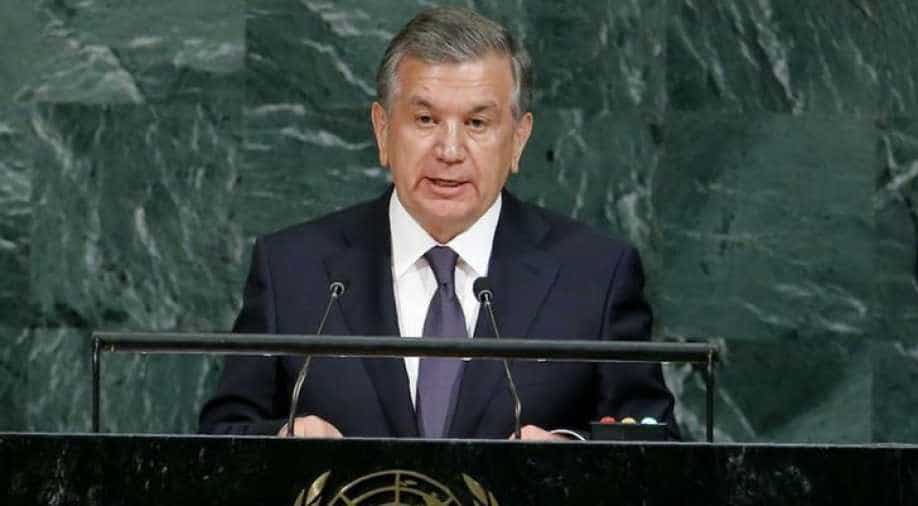 Uzbek President Shavkat Mirziyoyev made the offer of help in a letter of condolence to Trump Photograph:(Reuters)
Follow Us

On New Year's day, an Uzbek gunman burst into a nightclub in the Turkish city of Istanbul and killed 39 people.

Uzbekistan told US President Donald Trump on Wednesday it was ready to do everything it could to help investigate an attack in New York in which an Uzbek-born man is suspected of killing eight people by mowing them down in a truck.

Uzbekistan spoke out after a US law enforcement official described the suspect as a US immigrant born in Uzbekistan, a landlocked, predominantly Muslim country in Central Asia that was part of the Soviet Union until its collapse in 1991

Uzbek President Shavkat Mirziyoyev made the offer of help in a letter of condolence to Trump in which he condemned the attack as "extremely brutal" and said there could be no justification for such violence.

"From our side, we are ready to use all our power and resources to cooperate in the investigation of this terrorist act," Mirziyoyev wrote in the letter, which was posted on his country's Foreign Ministry's website.

"We express our solidarity with the US people."

The attack - the bloodiest single attack on New Yorkers since Sept. 11, 2001, when suicide hijackers crashed two jetliners into the World Trade Center- is a challenge for Mirziyoyev who assumed office at the end of 2016 and is trying to slowly open up his country after decades of authoritarian rule.

It also shines an uncomfortable light on Islamist militancy in the wider region which has supplied Islamic State in Syria and Iraq with thousands of fighters.

An Uzbek Foreign Ministry official told reporters earlier on Wednesday it was investigating reports that the attacker was a citizen of the Central Asian nation.

If the attacker's identity is confirmed, it would be the fourth deadly attack to be carried out by an Uzbek national or ethnic Uzbek this year.

On New Year's day, an Uzbek gunman burst into a nightclub in the Turkish city of Istanbul and killed 39 people.

In April, an ethnic Uzbek man born in Kyrgyzstan blew up a metro train in the Russian city of St Petersburg, killing at least 14 people, and that same month an Uzbek man rammed a truck into a crowd in Stockholm, killing four people.

All the attacks were linked to or claimed by Islamic State.

US police declined to publicly identify the man, but a source familiar with the investigation said his name was Sayfullo Saipov, 29.

CNN and other US media said Saipov had left a note saying he carried out the attack in the name of Islamic State and that he had shouted "Allahu Akbar" - Arabic for "God is greatest" - when he jumped out of his truck.

He had emigrated to the United States in 2010 and lived in Florida, other US media reported.

An acquaintance of Saipov told Reuters he had originally come from Tashkent, the capital of Uzbekistan.

Mirrakhmat Muminov, a truck driver and Uzbek community activist who lives in Stow, Ohio, told sources by phone that he knew Saipov and had spoken to him in recent months.

He said Saipov had lived in Stow two or three years ago, that they had met through the local Uzbek community, and that Saipov had also worked there as a truck driver.

Muminov said he had heard about the attack from members of the local Uzbek community, some of whom he said were getting ready to be questioned by the authorities.

He said he had no first-hand information about whether Saipov had carried out the attack.

“He was spontaneously religious," said Muminov. "He started studying religion in the United States," something he said it was hard to do in Uzbekistan where study of Islam is tightly controlled.

Muminov painted a picture of a man who was struggling to make it in the United States, had few friends, and poor communication and English language skills.

"He was withdrawn, nervous, sometimes aggressive. Because of that he was lonely, he lived in his own world. He was not very popular,” said Muminov.

"I heard that his third son was born a couple months ago.”