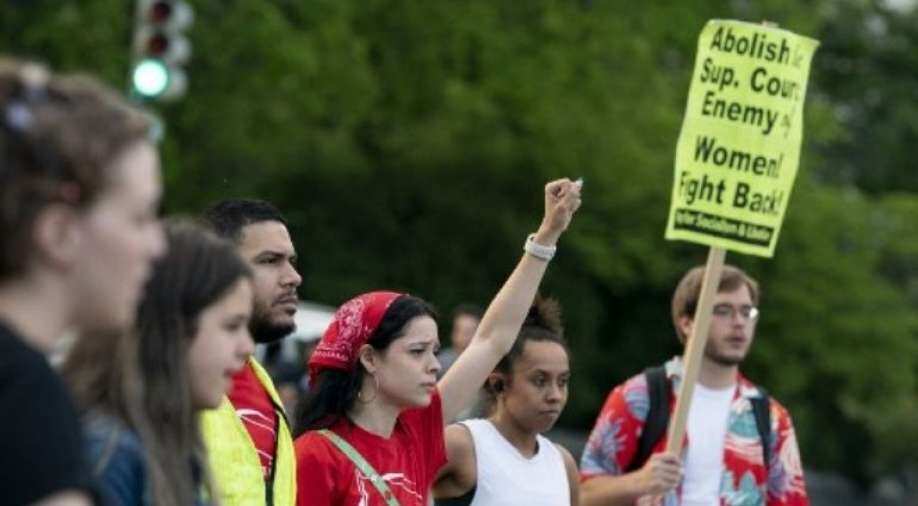 Pro-choice demonstrators gather in front of the US Supreme Court in Washington. Photograph:( AFP )

A Democratic drive to make the right to abortion the law of the land failed in the US Senate on Wednesday after Republicans refused to allow a vote on the deeply polarizing issue that threatens to upend the upcoming midterm election campaign.

But it was always a doomed and largely symbolic push, as Democrats already knew they would not be able to secure the 60 votes needed to advance towards a final yes or no vote in the evenly divided 100-member Senate.

In the end, all 50 Republicans and one of the 50 Democrats, West Virginia centrist Joe Manchin, rejected considering the legislation. Manchin's vote was no surprise as he had telegraphed his "no" hours earlier.

"Republicans in Congress -- not one of whom voted for this bill -- have chosen to stand in the way of Americans' rights to make the most personal decisions about their own bodies, families and lives," he said in a statement.

Although the outcome was never in doubt, the rejection is seen as significant, with abortion rights set to be a hot button issue for November's midterm elections, when control of both the House and Senate will be at stake.

Watch | US Senate may vote on abortion rights law

A raucous crowd of lawmakers from the House of Representatives, the lower chamber of Congress, which passed the legislation last September, gathered on the Senate side of the building chanting "my body, my decision" ahead of the vote.

They had been encouraged by new Politico/Morning Consult polling showing 53 percent of voters thought Roe should not be overturned, up three percentage points since last week, while 58 percent said it was important to vote for a candidate who supports abortion access.

"Generally, the people who vote and turn out based on abortion policy are those who support more restrictions on abortion rights," said Shana Gadarian, professor of political science at Syracuse University.

"By striking down Roe, this is likely to create a new constituency of pro-choice voters who are activated to turn out and donate in ways that they would not normally in a midterm election."

Senate Minority Leader Mitch McConnell suggested over the weekend that a federal abortion ban is "possible" if Roe is overturned, although he has since acknowledged that no position on the issue has ever achieved the 60-vote threshold.

But Democrats seized on the initial remark, arguing that highlighting their disagreement with Republicans could help them in the midterms.

Also read | If Roe vs Wade is overturned, abortion pills may become the new debate

"If we are not successful, then we go to the ballot box," Senator Amy Klobuchar told ABC on Sunday.

"We march straight to the ballot box, and the women of this country and the men who stand with them will vote like they've never voted before."

Activism around the issue is becoming increasingly acrimonious, with angry protesters in favor of abortion rights gathering at the homes of Supreme Court justices in Washington over the past week.

Multiple organizations that support abortion rights have called for a "massive day of action" on Saturday, with marches in New York, Washington, Chicago and Los Angeles, as well as hundreds of smaller events nationwide.

Police in the nation's capital, still on edge after Congress was attacked by a mob of former president Donald Trump's supporters in 2021, have set up temporary fencing around the court.

The leaked opinion is also spawning renewed calls by progressives to add justices to the court, fueled by the possibility the conservative-majority bench could overturn other landmark decisions.