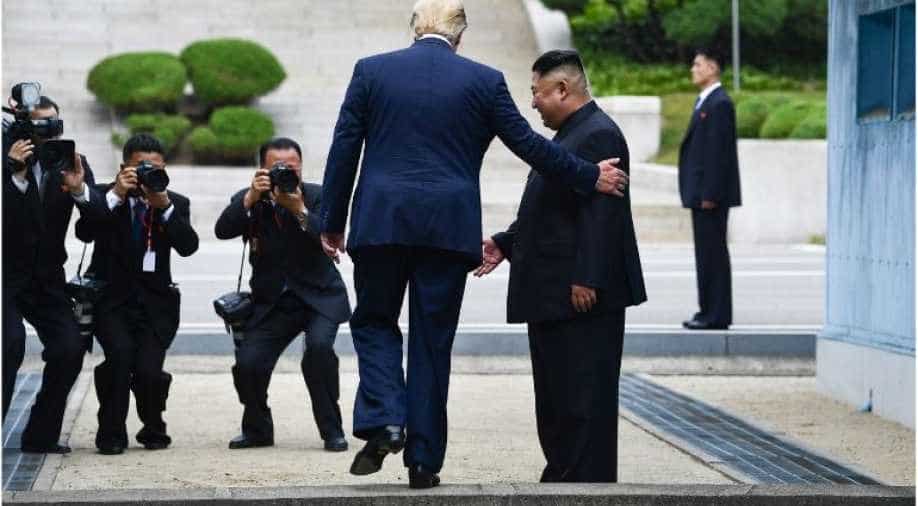 The US has announced that the stalled talks with North Korea will resume. But American sanctions on North Korea remains but at some point during the negotiations, "things can happen", Trump said.

Kim, standing alongside with US president said, "President trump has just walked across the demarcation line. He is the first US president to visit our country."

Explaining, "This is an expression of his willingness to eliminate all the unfortunate past and open a new future"

After this, both sides held talks for almost an hour at the demilitarized zone (DMZ), which divides the Korean peninsula.

Calling the day's event as "legendary" and "great for the world" US president said, "We went and met at the line, meeting at the line, I said, would you like me to come across, he said, I would be so honoured and that is the way it worked out".

The US has announced that the stalled talks with North Korea will resume. But American sanctions on North Korea remains but at some point during the negotiations, "things can happen", Trump said.

United States Special Representative for North Korea Stephen Biegun under the aegis of US Secretary of state Mike Pompeo will be leading the American team of negotiators while North Korea will be setting a new team.

Asked if negotiators of the previous North Korean team is alive, Trump said, "well, I think they are. I can tell you the main person is. I know that we know that, and we hope rest are too".

US President arrived in South Korea on Saturday and had on Twitter called for a meet with the North Korean leader. In Osaka, Japan where he was for 14th G20 Summit, Trump had tweeted, "I will be leaving Japan for South Korea (with President Moon). While there, if Chairman Kim of North Korea sees this, I would meet him at the Border/DMZ just to shake his hand and say Hello(?)!"

This is the third meeting between US President with North Korean leader after Singapore, Hanoi meet.